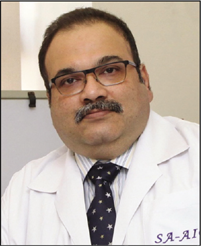 Indian surgical oncology has lost one of its stalwarts with the untimely death of Dr Dhairyasheel Savant.

Born in 1962 to Mrunalini and Narayan Savant, he was the older of two siblings, and had a happy childhood growing up in Dadar, Mumbai. His father Dr Narayan Savant was Head of the Department of Anaesthesiology, Critical Care and Pain at the Tata Memorial Hospital, Mumbai. Dhairyasheel went on to read Medicine at the Grant Medical College, Mumbai, qualifying in 1983. He applied himself as a student, and was clear from early on that he wanted a career in surgery. He did his postgraduation in surgery from the Tata Memorial Hospital, which inevitably led to a career in surgical oncology. He had a particular interest in head and neck oncology and reconstructive surgery. His training abroad included a Fellowship at the Memorial Sloan Kettering Medical Center, New York, USA in 1991 and a UICC-sponsored ICRETT Fellowship in Michigan in 1994.

Dhairyasheel was a talented surgeon, and painstakingly built up his surgical practice and reputation. Most of us express our dominant behavioural traits in how we progress through our careers. His main strengths were his willingness to help patients and to collaborate with colleagues. Expertise in surgical oncology has traditionally been restricted to big cities. He appreciated this and worked to rectify it, collaborating closely with surgical colleagues in smaller towns in Maharashtra. Often, he would travel out to district towns and operate there, sometimes a daunting exercise in limited facilities. Gradually, as his reputation grew, he concentrated his practice in Mumbai at the Asian Cancer Institute, the Saifee Hospital and the Breach Candy Hospital.

His collegial traits were evident in the setting up of the Asian Institute of Oncology (now called the Asian Cancer Institute), in which he had a big role to play. It started off in 2002 as a team of consultants working to provide high-quality multispecialty cancer care in Mumbai. He helped grow the project and supported its move to the Cumballa Hill Hospital; at the time of his death, he was its Medical Director for over a year.

In the past decade, Dr Savant brought his organizational skills to bear on his field at the national level. His touch was evident when the four major professional associations—The Association of Radiation Oncologists of India (AROI), the Indian Society of Medical and Paediatric Oncology (ISMPO), the Indian Association of Surgical Oncology (IASO) and the Indian Society of Oncology (ISO) came together to hold the first Indian Cancer Congress (ICC) in Delhi in November 2013. It was a landmark event with over 4000 delegates. At that time, he was the Treasurer of the ISO. He later became the Secretary of the IASO. He was the Secretary General for the third ICC that was to be held in November 2021, but was postponed due to Covid to 2023.

It was my privilege to have Dhairyasheel as a friend from our first day as classmates in medical school. He took his attention to detail and his ‘can do’ attitude beyond the operating room to every aspect of surgical life, whether it was looking after a ward full of people with burns, as an intern in rural Dahanu, or a patient he had performed a laryngectomy on. His help was forthcoming to anyone who sought it, and no problem was too difficult to solve. He approached people with kindness, and everything that life had to offer with a huge sense of adventure and joy. He had a bright, inquisitive mind and was a consistent member of the college quiz team. He travelled widely and wherever he visited, he would seek out and look up old friends and classmates. He faced his last few months of illness with immense courage and positivity. He was an attentive husband, a loving father and a caring son. He is survived by his wife Tanuja and daughters Akshaya and Aishwarya.

His death at the peak of his career is a loss to the entire surgical oncology fraternity and to everyone who had the privilege of working with him. It is a huge loss to his patients, who have lost a caring surgeon. I have personally watched him take a phone call while in London, and explain smilingly to a patient in Mumbai that it was fine to have a mango drink (aam pana) after neck surgery! Friends will miss his encyclopaedic knowledge of whiskies and liqueurs, and his enthusiasm for dining out at seafood restaurants. They will also miss his generosity. While on a trip to Bali with seven friends he went and bought them all colourful batik shirts to remember the occasion (which they now wear when they raise a toast to him). I personally will always miss his ambiguous, smiling shake of the head, which could mean ‘Yes’ or ‘No’, and which used to drive me mad when I was on the quiz team with him!