Dietary deficiency of vitamin A among rural children: A community-based survey using a food-frequency questionnaire

While not much is known about the prevalence of subclinical VAD, some studies have suggested that up to 62% of preschool children may be suffering from it. Since manifestations of subclinical VAD are less acute, it generally remains hidden from public view.[3],[4],[5],[6] We, therefore, (i) assessed the consumption pattern of vitamin A-rich foods in children 1–5 years of age in rural Jammu; and (ii) estimated the dietary deficiency of vitamin A, leading to a risk of subclinical VAD in villages of the study area.

While laboratory-based estimation of vitamin A in serum is the gold standard for assessing VAD, this is often not feasible due to financial and logistic constraints, especially in public health settings.[7],[8],[9] The Vitamin A Technical Assistance Program of Helen Keller International has designed a semi-quantitative tool, the Helen Keller International Food-Frequency Questionnaire (HKI-FFQ), which permits estimation of subclinical VAD at the community level. This tool, has been validated and found to correlate well with direct laboratory assessments, and has been used in a number of studies and settings.[10],[11],[12] We used the HKI- FFQ tool to assess vitamin A intake and status.

The HKI-FFQ has been validated by WHO using serum retinol levels for specific sample size and type of sample to provide reliable estimates of subclinical VAD. As per the recommended methodology by Helen Keller International, 750 children (50 drawn from each of 15 cluster-villages) were surveyed to determine the burden of subclinical VAD.

Adaptation of the tool to local conditions

A prerequisite for using the HKI-FFQ is modification of the tool according to local availability/consumption of food items (including foods rich in vitamin A) so as to permit correct estimation of vitamin A intake and status. The original tool consists of 28 food items of which 11 items are permitted to be replaced with locally available and commonly consumed food items.[14]

The tool was locally adapted in three steps.[10] The first step was drawing a list of commonly available items through shop surveys. Five such shop surveys were conducted by visiting two local grocery stores, one vegetable vendor, one milk outlet and one pharmacy store. The purpose of the shop survey was to identify and document locally available foods including those rich in vitamin A including weaning foods, infant formulas, powdered milk, vitamin supplements, etc. The second step was the holding of focus group discussions (FGDs). Two such FGDs were held, each consisting of 7–12 participants represented by lay women, health workers, members of panchayat, grassroots women's groups and other village functionaries. The purpose of the FGDs was to find out the acceptability of locally available foods in the community. The third and last step was to check which of the available and acceptable items had vitamin A concentration >100 RE/100 g, and all these items were included in the modified tool.

The first author assisted by two community health workers conducted the shop surveys and FGDs. Data collection from respondents, i.e. either mother of identified child or a responsible caregiver was the responsibility of the first author. Prior approval was obtained from the ethics committee. Data were collected from January to December 2011 excluding the months of May to August—the months when mango production is at its peak—so as not to overestimate the intake of vitamin A-rich foods, since mangoes are rich in vitamin A and are consumed in abundance.

Intakes were assessed in terms of ‘animal’ and ‘weighted’ sources of vitamin A. The former included items such as eggs, fish, meat and poultry, besides milk and milk products, while the latter included both animal and plant sources with an adjustment made for poor bioavailability from plant sources. Subclinical VAD was inferred for a cluster if mean weekly intakes were below 4 for animal sources or below 6 for weighted sources. If more than 70% of the clusters failed to meet the cut-off values for either criteria, then the entire study area was deemed to have subclinical VAD.[10]

Data were entered in Microsoft Excel using the double-entry technique and analysis was done using weighted frequency, percentages and proportions.

A total of 750 children were studied of which 312 (41.6%) were girls. The mean (SD) age of the participants was 33.45 (12.7) months [Table - 1]. The majority (84.5%) of children belonged to families of the middle socioeconomic class as per the modified Uday Pareek scale. Undernutrition as assessed by mid upper-arm circumference was present in 28.4% of children. Breastfeeding practices were suboptimal; 30.6% were not breastfed for the recommended 6 months, 7.8% did not receive any breastfeeding while 46.4% had been exclusively breastfed till 6 months. Prophylactic dose of vitamin A supplementation was received by only 14.9% in the past 6 months. 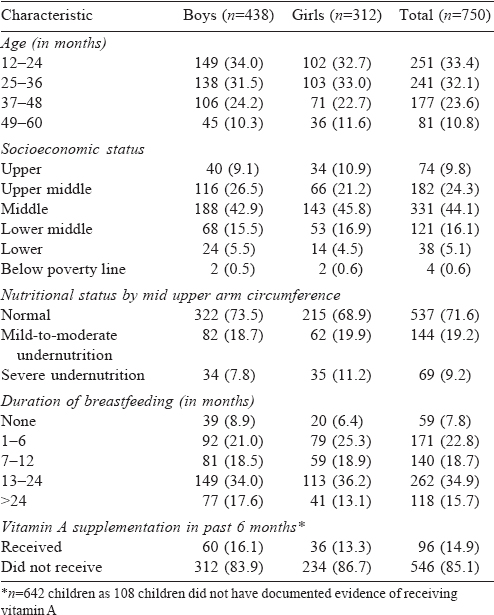 Dietary pattern and frequency of consumption of vitamin A-rich foods

[Table - 2] shows the mean frequency of consumption of items included in the HKI-FFQ and proportion of children consuming them at least once a week. Of the items included in the analysis of vitamin A intake, amaranth was consumed most frequently (2.7 days/week), while carrots (1.7 days/week) and papaya (0.8 days/ week) came next. Among animal sources, eggs (1.1 days/week) and butter (1.0 days/week) were consumed at a higher frequency compared with liver and fish (0.2 day/week). The proportion of children consuming eggs (32.5%) and butter (21.6%) in the past week was higher than that for liver (5.2%) or fish (4.4%), while it was highest for amaranth (79.2%) and carrots (59.3%). Food supplements fortified with vitamin A were also consumed frequently (1.2 days/week). Cod liver oil, an important source of vitamin A, was not consumed by any child. 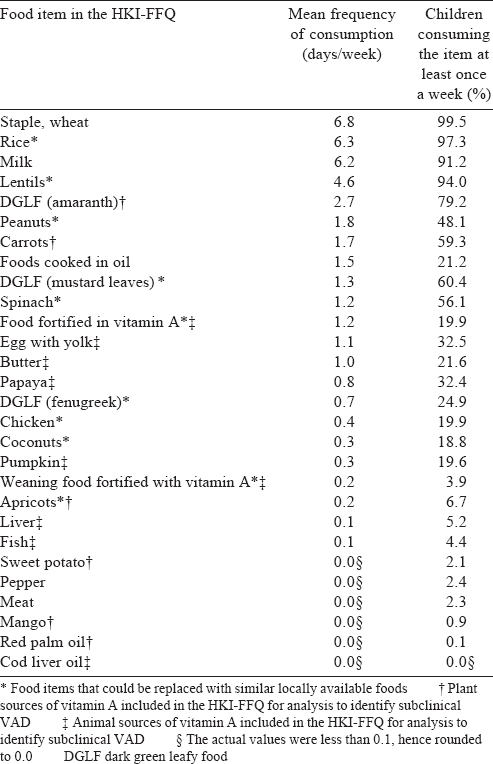 Table 2. Semi-quantitative assessment of consumption of food items included in the HKI-FFQ tool

We did this study to understand the prevalent dietary practices, correct subclinical deficiency if any, and also help frame recommendations for its prevention and control.

That fewer girls (41.6%) enrolled in the study could be due to the low child sex ratio of 776 reported for rural Jammu in Census 2011.[13] The high prevalence of undernutrition in our study is similar to that reported in other studies.[15],[16],[17],[18],[19] Breastfeeding was suboptimal in the children with an average duration of 16 months compared with 22 months for the state of Jammu and Kashmir and have contributed to subclinical VAD.[15] Suboptimal coverage of vitamin A supplementation has also been reported to be a contributory factor for subclinical VAD in an Ethiopian study.[20] A lower proportion of children (14.9%) had received vitamin A supplementation in the past 6 months in our study compared with that reported by the National Family Health Survey (NFHS)-3 and the National Nutrition Monitoring Bureau (NNMB) where it was 18% and 58%, respectively.[15],[21],[22]

While plant sources of vitamin A were consumed more frequently with 92.1% children consuming such sources at least once a week and unweighted frequency of consumption being 5.8 days/week, low bioavailability from such foods increased the risk of subclinical VAD. NFHS-3 has also reported low vitamin A intakes with only 29% of the recommended dietary allowance (RDA) being met in children 6–35 months old.[15] Another study also reports that 91% of their subjects consumed less than the

RDA for Indians.[23] Studies by NNMB and Narkhede et al have also found, like in our study, that animal sources of vitamin A are consumed less frequently as compared to plant sources.[16],[24] NNMB also noted the intake of leafy vegetables to be low and in the range of 16%–21% of RDA.[25] High prevalence of subclinical VAD even in the presence of moderate intake of green leafy vegetables but low animal food intakes has been reported by other studies also, possibly as a result of low bioavailability of vitamin A from plant sources.

According to the National Sample Survey Office (NSSO), 62% of Indian preschool children suffer from subclinical VAD and the high prevalence was attributed to low intake of vitamin A- rich foods with 86% of subjects consuming less than 50% of the RDA.[22] Another study reports that less than one-third of eligible preschool children received vitamin A supplementation.[25] In a recent paper, we have also reported dietary deficiency as a major factor for the high burden of subclinical VAD among children 1–5 years of age.[26]

There are two important limitations of this study. The first is the possibility of over-estimation of deficiency because breast and animal milk intakes were not taken into account for analysing VAD even though they contribute considerable amounts in Indian diets, especially among vegetarians. This is an inherent limitation of the tool that we used. The second limitation pertains to non- corroboration of the estimated burden of subclinical VAD with serum retinol levels, which could not be circumvented as our institution did not have the required facilities.

To conclude, subclinical VAD continues to be a public health problem due to suboptimal consumption of green vegetables, low consumption of eggs/butter and negligible consumption of other animal source foods. Besides the low overall intakes of vitamin A- rich foods, subclinical VAD could also be attributed to low bioavailability of vitamin A from plant sources. Dietary diversification through the inclusion of a wider range of plant and animal sources of vitamin A, better implementation of mega-dose vitamin A supplementation, improved breastfeeding practices, coupled with control of undernutrition together could play a major role in reducing subclinical VAD. The HKI-FFQ may be useful as a proxy indicator for assessing vitamin A intake/status to identify pockets of subclinical VAD, especially in resource- constrained settings.