Health File of Mahatma Gandhi: His experiments with dietetics and nature cure 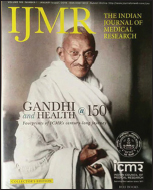 The editorial team at the Indian Journal of Medical Research deserves our applause for putting together over 20 papers on Mahatma Gandhi and health. Such compilations have long been overdue, not only as far as Gandhiji is concerned but also with reference to other respected leaders such as Jawaharlal Nehru, Sardar Patel, Dr S. Radhakrishnan, Rabindranath Tagore and others.

The essays in this supplement include accounts of Gandhiji’s illnesses and operations, experiments for preserving health (including the use of nature cures), concepts on cleanliness, the health of mothers and children, water-borne diseases, nutrition, physical fitness, smoking, the environment and the welfare of the community. Other papers deal with leprosy, tuberculosis and malaria.

The chapter most likely to appeal to clinicians is that by Drs Balram Bhargava and Rajni Kant. They provide Gandhiji’s health record with chronological descriptions of his illnesses. Table I lists illnesses from 25 October 1914 to 25 March 1927. Unfortunately, there is no table for the period 1927 to his death except for a simple, shortlist of ‘health conditions’ between 1918 and 1945 [Table 3]. An attempt to access the source cited for [Table 1] (www.biblio.wiki/wiki/chronology_of_Mahatma_ Gandhi%27s_life) elicits the statement, ‘This site cannot be reached. www.biblio.wikf's server IP address could not be found’.

Table II lists doctors who interacted with Gandhiji. This is especially welcome as it brings together the physicians and surgeons consulted by Gandhiji during his lifetime. Brief remarks provide a little information on each of these doctors. Like Oliver Twist, I yearned to ask for more. Given the choice, I would have pleaded for a chapter devoted to these doctors as each of them is of interest. Even so, this chapter contains several fascinating anecdotes. The manner in which Dr G.R. Talwalkar managed to get Gandhiji to take emetine is one such. This physician’s successful espousal of garlic for lowering Gandhiji’s blood pressure will please those fond of this odoriferous member of the allium family. ‘Ice doctor’ Kelkar’s treatment is another. The manner in which Dr A.K. Dalal overcame Gandhiji’s objection to drinking milk is yet another. Incidentally, the reason why Gandhiji abjured the milk from cows and buffaloes is also worth learning. The description of Gandhiji’s appendicectomy by Colonel Maddock using a hurricane lamp for illumination provokes admiration for the surgeon. Physicians and cardiologists will find of interest the details provided on Gandhiji’s basal metabolic rate, blood pressure recordings, eye examination, blood and urine tests, blood sugar profile, electrocardiogram and oscillograph reports. Details are also provided on his daily routine in Sevagram and the health bulletins issued when he went on fasts protesting on a variety of issues. Those with astrological leanings are provided Gandhiji’s horoscope. The term ‘myocardosis’ used by the authors may puzzle the neophyte. The dictionary defines it as ‘symptomatic signs of cardiac disease without any discoverable pathological lesion’.

Unfortunately, no autopsy was conducted on Gandhiji’s body. Avoidance of or inadequate autopsy appears to be the norm when a political leader passes away in independent India, in striking contrast to the practice in colonial times and in western countries. I use the word ‘unfortunately’ as we are deprived of useful medical information and our practices leave the door open to accusations and insinuations. Mr Subramanian Swamy has called ‘for the probe into Gandhi’s death to be reopened, alluding that it could not be fully established that the father of the nation was shot by Nathuram Godse. ‘Why no post mortem or autopsy on Gandhiji’s body?' (report by Sanya Dhingra in The Print, 16 February 2020). Dr T.D. Dogra was criticized for the allegedly inadequate autopsy performed on Mrs Indira Gandhi’s body. He had removed just 2 of 28 bullets from her body ‘to avoid mutilating the prime minister’s body’ (https://www.upi.com/Archives/1985/07/17/Doctor-left-28-bullets-in-Gandhis-body/1413490420800/).

Drs Rajni Kant and Balram Bhargava have also provided a chapter on Gandhiji’s medical legacy. We learn that Gandhiji had aspired to a career in medicine but was dissuaded by his elder brother since Vaishnavas (the denomination of Hinduism to which the family belonged) could have nothing to do with dead bodies. On his recommendation, Gandhiji turned to a career in law. His interest in health and all that affected it persisted. He became an ardent advocate of naturopathy and conducted experiments on himself––and some of his associates––on diet, fasting and other similar matters. (A separate chapter by Mr A. Annamalai deals with these in detail.) He emphasized the value of preventive care. While in Africa, he set up the Indian Ambulance Corps.

While he could be persuaded to take curative drugs such as quinine, his belief that disease was the consequence of sin prevailed. Fasts retained a panacea-like quality in his mind. During a plague epidemic in Johannesburg, he prescribed the application of wet earth bandages to the heads and chests of victims. The survival of two patients was attributed to this therapy. His favoured drugs were castor oil, sodium bicarbonate, quinine and iodine. He was unhappy about the commercialization of the production and distribution of drugs as he believed that healthcare must rise above profits. The paragraph in the section ‘Holistic health’ on why he resisted highly qualified doctors and the section on ‘Dealing with Kasturba’s health’ are worthy of study. His efforts at educating the public on hygiene through Young India and Navjivan are described here. Joking about himself, he had written to Gokhale, ‘One word from the quack physician: ample fasting… and you will get rid of your diabetes…' ‘When god tested Gandhi’ describes his experience with Parchuram Shastri.

Gandhiji on sanitation and health is the subject of a separate chapter by Drs Bindeshwar Pathak and Indira Chakravarty.

Other essays provide further information on his influence on health practices among his associates and the population in general. Aphorisms such as ‘It is health that is real wealth and not pieces of gold and silver’, the eleven vows made by him, the insistence of cleanliness, healthy diet and physical exercise and the importance of making the lives of villagers self-sufficient were practical and invaluable. (Dr B.S. Garg elaborates on Gandhiji and villages in a separate chapter. Dr M. Subba Rao et al. give us the Mahatma’s views on nutrition and diet.) It is, indeed, unfortunate that we have lost sight of them.

Dr Abhay Bang’s chapter entitled ‘Meeting the Mahatma’ starts with the sentence ‘He was killed before I was born.' I will not rob you of the joy of learning from this essay.

Another engrossing chapter provides us an American view of the Mahatma’s empiricism. Professor Mark Lindley was ten years old when Gandhiji died. Like Dr Bang, he ponders Gandhiji’s practices and statements and provides us his conclusions.

Chapters such as those on maternal and child health, malaria, leprosy, tuberculosis, water-borne diseases and tobacco and cancer also provide data on the management of these diseases after Gandhiji’s death.

Inevitably, there are overlaps in the contents of various chapters, but this is all to the good as we learn of various views and opinions on similar subjects.

This issue of the journal features several historically important photographs. Some examples: Gandhiji and Dr Sushila Nayyar treating her brother Pyarelal’s scorpion bite, Gandhiji sitting near the operation table where his grand daughter Manu was undergoing surgery for appendicitis and Dr Gajjar demonstrating hookworm ova to Gandhiji through the microscope.

Some of the later chapters gave me the impression that the editorial team had farmed out subjects to institutes under the Indian Council of Medical Research. This has resulted in the focus shifting from Gandhiji to work done in these institutes. This is especially evident in the chapter on Gandhiji’s views on the environment, where we learn more on the ICMR-National Institute for Research in Environmental Health.

Established historians, experts on the life and work of Gandhiji, such as Mr Ramchandra Guha, could have significantly augmented the importance of this supplement.