Surgery for Portal Hypertension in India: A very personal journey

I was an idealistic young man, probably an extinct species now, who having had the privilege of being educated in Cambridge, London and Harvard always wanted to use his training to return to India to provide the best medical services in the world to the poorest of the poor. Unfortunately, in spite of receiving an elite surgical education, I ended up confident only in operating on experimental dogs, rats and monkeys[1],[2],[3] and hardly had much experience on procedures in humans. So when I was selected to be an Assistant Professor in Surgery at the All India Institute of Medical Sciences (AIIMS) in New Delhi (using the influence of a friend, then Indira Gandhi’s Press Officer and the renowned surgeon Professor A.K. Basu) I was, to say the least, a bit worried about my surgical skills.

About a month after I arrived at the Institute, I met Dr B.N. Tandon, Head of Gastroenterology, in the foyer who told me they were looking for a surgeon who could perform operations for portal hypertension; they had a 24-year-old man waiting for this procedure in their ward. Was I willing? I had assisted Dr Robert Linton and Dr Ronald Malt a number of times at the Massachusetts General Hospital in Boston when they did these procedures but had never done a portosystemic shunt on my own. So I desperately looked up four or five operative surgery books in the library and embarked on the operation. The patient ‘V’ had non-cirrhotic portal fibrosis (NCPF) and the portocaval shunt was surprisingly easy. He survived and went on to lead a normal life. However, I soon discovered that unlike the patients with portal hypertension I had seen in Boston who mainly had alcoholic cirrhosis, a condition in which their liver function was usually severely compromised, in Delhi they mainly had non-cirrhotic diseases, i.e. NCPF and extrahepatic portal venous obstruction (EHO)— conditions which were accompanied by massive bleeding but with well-preserved liver function. EHO also affected mainly poor children whose portal vein was replaced by a cavernoma and therefore the only vein available for shunting was the splenic vein, which had to be found after a difficult and bloody dissection that included removing a huge spleen usually adherent to the diaphragm. Having tasted success with a portocaval shunt, I decided to try lienorenal anastomoses—joining the splenic vein, which contained blood under high pressure to the low-pressure renal vein. The first operation took 17 hours, the patient lost 8 units of blood but thankfully survived as also, surprisingly, did the next 47.

Now that I had shown that I could do elective operations for portal hypertension fairly competently, my colleagues began to refer to me patients with massive variceal bleeding for emergency operations. There was no endoscopic sclerotherapy or band ligation in those days and I did what was known as the Crile’ s procedure— transthoracic, transoesophageal variceal ligation. Of the first 11 Crile’s I performed, 7 died. There were mutterings: ‘he should have an L plate on his back while operating’, ‘he’s the world’s expert at premortem procedures’ and ‘this fine CambridgeHarvard trained surgeon should go back to where he came from and continue operating on animals’—were the more charitable remarks. But I persisted and decided one day, with Dr B.N. Tandon’ s concurrence, that since I could do an elective lienorenal shunt fairly well, I would try it in the emergency situation, a procedure that had not been done previously under these circumstances. The first patient on whom I did an emergency shunt [Figure - 1] is still alive 40 years later. Embened by this success, I started doing shunts in both the elective and emergency situations which sometimes meant performing three of them consecutively over 36 hours (night, day and night) and, to my surprise, my elective mortality after the first 100 operations was 1 % and the emergency mortality came down from 70% to 18% (in contrast to 40% in cirrhotics in western countries). These rather good results, I soon realized, were not because I was a particularly gifted surgeon but because our patients were young, had good liver function and were thus able to withstand major operations. Their large spleens and correspondingly dilated splenic veins also ensured that the lienorenal shunts remained patent over the long term.[4] They also did not have post-shunt encephalopathy which was common in cirrhotics.[5] Having acquired a certain reputation, patients from all over the country were referred to me and at one stage I had an 18-month waiting list for portal hypertension surgery.

I then realized that we, in India, have a unique experience in portal hypertension, which was very different from the West. Not only was portal hypertension the most common cause of massive upper gastrointestinal haemorrhage here[6] with 55% of our patients with haematemesis bleeding from oesophagogastric varices (versus 20% in the USA where duodenal ulcer bleeds were more common) ; most of these variceal bleeders were non-cirrhotics (EHO and NCPF). They were also poor, lived far away from well-equipped hospitals with no blood transfusion facilities so that a bleeding episode might be fatal. For them a one-time procedure that carried a low mortality and was not accompanied by postoperative encephalopathy seemed to be the most appropriate therapeutic choice. So we offered all patients with good livers and a single episode ofhaematemesis a shunt procedure; eventually performing over 70 a year. Later we even did prophylactic shunts before they bled.[7]

In 1996, I moved to Sir Ganga Ram Hospital (SGRH) and although the number of procedures was fewer, the aetiological distribution was similar [Table - 1]—patients with EHO dominating the list (who were usually poor and admitted to our general wards). [Figure - 2] shows the number of operations in which I was involved in the AIIMS and SGRH.

However, there was another dimension to the portal hypertension story in which we, as a team, also played a part.

In 1985, when the new GI Surgery Unit was launched in AIIMS we decided that, although we had probably found the solution for patients with non-cirrhotic portal hypertension, there still remained a substantial number of them with cirrhosis who had poor liver function who were doomed to die from liver failure. For them the only hope was a liver transplant, which was being done routinely in most western countries as well as a number in East Asia. However, there were three main problems to overcome. The first was that the law in India only recognized cardiorespiratory death and not brain death —a condition in which the brain was irreversibly damaged (usually by trauma or intracranial haemorrhage) but the heart continued to beat and supply blood to the liver which could be harvested and transplanted. The second was a lack of surgeons in India trained to perform liver transplants and finally there was the exorbitant cost of the procedure. We tackled all these problems simultaneously and overcame them, in part or completely, working together and strongly supported by the The National Medical Journal of India.

We held public awareness meetings in the four major cities in India, used the print and visual media extensively[8] and were part of the Singhvi committee which was set up by the government to examine issues regarding brain death and the buying and selling of human organs. After our report[9] was considered by the Cabinet, the Transplantation of Human Organs Act of India was passed by Parliament in 1994 and became law the following year. This recognized brain death and outlawed organ trade. We also sent a number of our residents to liver transplant centres abroad for training and after returning many of them have set up successful liver transplant programmes that rival the best in the world. However, the cost problem has not been solved with procedure charges averaging ?20 00 000 (2 million) making it out of reach of much of our population but still one-tenth of its cost in the West. Today there are 74 centres in India recognized to perform liver transplantation and in the best of them the recipient survival rate at one year is 94%.

During this time we did not neglect to publicise our experience. The first was a small book in 1978, Portal Hypertension in India [Figure - 3], which was a transcript of the proceedings of a conference we organized at AIIMS attended by many doctors from all over the country who were dealing with this problem among whom were Dr A.K. Basu from Calcutta (now Kolkata) and Dr B.N. Tandon. I was also invited to deliver keynote addresses at the World Congresses in Sao Paolo (NCPF), Amsterdam (EHO), Brighton (haemodynamics) and Los Angeles (hepatic venous outflow tract obstruction). The papers we published and which I consider to be the most important are listed in [Table - 2]. These were mainly on the management of patients with EHO, NCPF, HVOO, possibly the first report on reversing portal biliopathy by a shunt procedure and one on the history of the passage of the Transplantation of Human Organs Act of India in 1994.[10] Unfortunately, we made no major contributions, and perhaps should have, towards understanding the aetiology of any of these diseases. 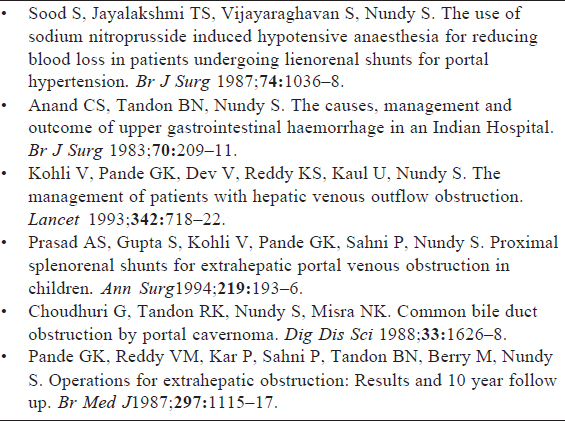 Finally, what lessons have I learned over this 42-year journey in portal hypertension surgery?

The first and most important lesson is that we have to devise Indian solutions to Indian problems. Portal hypertension surgery has been largely given up in western countries because of its poor results in patients with cirrhosis. However, our patients are generally non-cirrhotic, have well-preserved liver function, huge spleens, no access to specialized care and in them variceal bleeding may be catastrophic. A portosystemic shunt is a one-time curative procedure and in young patients carries a low mortality, if performed competently, there is a low rebleeding rate and encephalopathy is rare.

The second lesson is that even if one does not have the requisite skills, persistent and hard, focused work generally succeeds and one should not be derailed by criticism from one’s colleagues. ‘Never give up’ should always be our motto.

And finally, one should be lucky in one’s mentors. Mine were the two doctors who I consider to be the all-time greats of modern Indian medicine—Dr A.K. Basu and Dr B.N. Tandon [Figure - 4]. Without them my personal j ourney in portal hypertension surgery would never have begun.