Thyroid dysfunction in patients on antiretroviral therapy: A perspective from southern India

The association between human immunodeficiency virus (HIV) infection and endocrine abnormalities is well documented in the literature. Before the initiation of highly active antiretroviral therapy (HAART), opportunistic infections were the primary culprit for thyroid dysfunction. However, the effects of HIV on the thyroid gland following HAART are still under scrutiny. In the post-HAART era, it has been suggested that autoimmunity, non-thyroidal illness, HAART drugs and immune reconstitution inflammatory syndrome (IRIS) as a consequence of therapy may all contribute to thyroid dysfunction.[1]

This cross-sectional study was done at St John’s Medical College Hospital, Bengaluru. Consecutive patients were enrolled from the outpatient department if they were (i) diagnosed with HIV infection (enzyme-linked immunosorbent assay); (ii) aged more than 18 years; (iii) on HAART for 1 year or more ; and (iv) clinically stable with no evidence of any acute illness. Patients were excluded if they had any acute illness in the preceding 2 months or if they were on medications that affect thyroid function.

Estimation of the sample size was based on the study by Beltran et al.[5] Considering the prevalence of thyroid dysfunction to be 16%, for a 6% precision and 95% confidence interval, the minimum number of participants required for the study was estimated to be 143.

Descriptive statistics were reported using mean (SD) or median with interquartile range (IQR) for continuous variables; numbers and percentages were used for categorical variables. The correlation coefficient was computed to determine the association of thyroid-stimulating hormone (TSH) with CD4 counts, duration of HAART and other variables. The partial correlation coefficient was estimated to determine the relationship between TSH and CD4 counts adjusted for age and duration of HAART. The differences in median TSH values in groups of patients on different HAART drugs were determined using the Mann–Whitney U test. A value of p<0.05 was considered statistically significant. All analyses were done using SPSS version 21.0.

CD4 counts were estimated using the flowcytometry method (BD FACS Calibur). Thyroid function tests were done at an accredited laboratory attached to the institution. Free T3 (fT3), fT4 and antithyroid peroxidase antibody (TPO-Ab) were estimated by competitive immunoassay using the chemiluminescent technology. TSH was measured using two-site sandwich immunoassay using direct chemiluminescent technology with constant amount of two antibodies. The Access 2 Beckman Coulter was used to perform the assays. The biological reference ranges for the thyroid function tests were: TSH 0.34–4.1 mIU/ml; fT4 0.61–1.12 ng/dl; fT3 2.5– 3.8 pg/ml. The present reference ranges at our institution are different as the machines have since been recalibrated.

The study was approved by the Institutional Ethics Committee (IEC 162/2015).

A total of 159 patients were enrolled, of whom 94 were males. The mean (SD) age at diagnosis was 38.8 (10.8) years and the mean (SD) duration of HIV was 55.0 (38.12) months [Table - 1]. The median CD4 count was 460 (IQR 341, 596) and the median TSH was 2.58 (IQR 1.8, 4.0). All patients received lamivudine at some time during treatment [Table - 2]. Thyroid dysfunction was observed in 47 patients. The most commonly observed thyroid function abnormality was subclinical hypothyroidism in 29 patients [Table - 3]. Of the 30 patients with hypothyroidism, only 4 had elevated TPO-Ab titres. TSH levels had a negative correlation with duration of ART and CD4 counts. Age had a negative correlation with CD4 counts. Even after adjusting for age and duration of ART, TSH levels had a negative correlation with CD4 [Table - 4]. The median TSH levels in patients receiving a particular drug [Table - 5] were compared to those of patients who had not received the drug. The only statistically significant difference was noted between patients who had and had not received zidovudine. However, it is clinically irrelevant as the median TSH values were within the normal range.

Table 1: Demographic and clinical characteristics of the study participants (n=159) 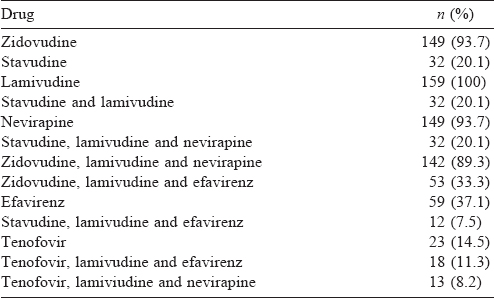 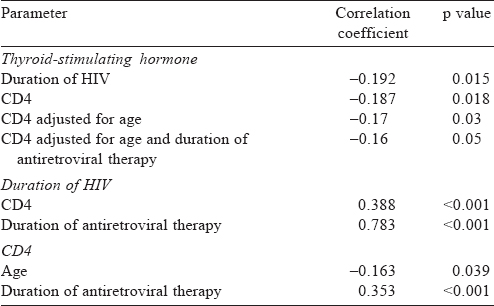 Table 5: Comparison of median thyroid-stimulating hormone levels in patients who did or did not receive various drugs

The most common pattern of thyroid dysfunction is subclinical hypothyroidism, which is consistent across studies. We documented hypothyroidism in 30 (18.9%) patients, of whom only 1 patient had overt disease. In contrast, the prevalence of subclinical hypothyroidism in southern India is <10%.[11],[14] Besides an underactive thyroid, isolated fT4 and indeterminate results of thyroid function tests were also noted in our study. A similar distribution is seen in studies that have categorized the patterns of dysfunction.[1],[5],[12],[15] Isolated low fT4 was as high as 6.8% in the study by Beltran et al.,[5] and was 3.7% in our study. The pathophysiological basis for this has been suggested to be a hypothyroid-like regulation of the pituitary–thyroid axis. The basis of this hypothesis is the elevated 24-hour mean TSH levels and the higher TSH peak response on thyrotropin-releasing hormone stimulation seen in these patients.[16] Assay interference due to HAART agents may be contributory.[1] While isolated fT4 elevation could be the non-thyroidal illness syndrome, isolated fT3 elevation could not be explained or categorized.

In our study, TPO-Ab positivity in patients with hypothyroidism was low, i.e. only 4 of 30 patients. Increased autoimmunity has been observed in early disease, probably due to the effect of the virus on the host tissues.[17],[18] IRIS has also been observed in this context. The 6.2% TPO-Ab positivity in our study was comparable to the Kolkata report of 3.9%.[3] Silva et al. from Brazil,[19] who found 4. 3 % positivity in patients with thyroid dysfunction, did not discard the possibility of autoimmunity in these immunodeficient people, and suggested the need for tissue studies. The lower autoimmune marker status may point to other considerations in the aetiology of thyroid dysfunction in these patients.

Though the role of HAART is questioned by some studies, associations with nucleoside reverse transcriptase inhibitors (NRTIs) and protease inhibitors have been observed. Silva et al.[19] and Beltran et al.[5] suggested a link between the use of stavudine and thyroid dysfunction, as has been described by Zandman- Goddard and Shoenfeld.[17] In the study by Beltran et al., the odds ratio (OR) for hypothyroidism in patients receiving HAART was 2.7.[5] A correlation with NRTI use and elevated TSH has been reported from Austria in a study that enrolled 410 patients.[20]

Another observation from our study is the negative association with CD4 count. Even after adjustments for age and duration of ART, higher CD4 counts were associated with lower TSH.[5] In their study of 50 patients, Jain et al. reported such an association with CD4. They suggested that thyroid abnormalities manifest as CD4 counts fall with advancing disease.[8] Beltran et al. also suggest that low CD4 count is associated with the prevalence of subclinical hypothyroidism with an OR of 2.5 in those with CD4 counts <200.[5] Sharma et al., who made similar observations, suggested that patients with low CD4 counts may have higher viral loads.[3] An Indian study on HIV-infected children has reported an inverse correlation between CD4 and TSH, as observed by us.[9] The association may be due to the increased risk of infections or infiltration of the thyroid gland in patients with lower CD4 counts. However, it requires a tissue diagnosis for confirmation.

The main strength of our study is the inclusion of patients with stable clinical parameters, thus excluding those with the sick euthyroid syndrome. The main drawback of our study is the lack of a comparison group who were not on ART. Anti-thyroglobulin antibodies and imaging studies were also not done.

Subclinical hypothyroidism is the most frequently observed thyroid dysfunction, and TPO-Ab positivity in PLHIV is low. Our study, albeit with limitations, suggests that people with HIV on HAART should be screened for thyroid dysfunction. In this context, it is noteworthy that patients with subclinical hypothyroidism, who have symptoms or suffer from cardiovascular disease require treatment.[21] Larger studies are necessary to evaluate the health of PLHIV and mild thyroid dysfunction as well as pharmaco-economics of screening to better inform guidelines.