In India in 2015, an estimated 2.5% of new cases and 16% of previously treated cases had multidrug-resistant tuberculosis (MDR-TB).[1] A study reported that the percentage of adverse drug reactions (ADRs) among patients with MDR-TB stands at 58%.[2] About 18 adverse events have been reported in various other studies.[3] Not much difference has been observed in previous studies with respect to ADRs as far as the comparison between patients with human immunodeficiency virus (HIV) coinfected with TB and those with TB but HIV-non-infected is concerned.[3] Hepatotoxicity due to pyrazinamide and ethambutol has been reported previously.[4] However, another study reported that hepatotoxicity while on an MDR-TB regimen did not result in poor treatment outcomes.[5] We studied the ADRs and predictors for discontinuation of the MDR-TB regimen.

All patients with MDR-TB above 10 years of age, of either gender, who were on drugs for MDR-TB for at least 2 months (including defaulters), who gave written informed consent were included in the study. The patients were diagnosed as MDR-TB using Cartridge Based-Nucleic Acid Amplification Test (CB-NAAT) at the designated microscopy centre of Sir Takhtsinhji Hospital (government district hospital) of Bhavnagar.

The investigators filled up a one-page questionnaire on ADRs through home visits. The patients’ case papers were also checked for additional data such as laboratory investigations. The questionnaire consisted of sociodemographic variables, addiction, HIV status, duration of treatment, drugs currently on and ADRs, the reason for stopping the particular drug, previous history of default, the reason for default, etc. Tobacco consumption and alcohol drinking were asked for through a single question but were not quantified. The questionnaire was translated into Gujarati for ease of data collection. The translated questionnaire was validated with concurrent validity. The face validity and content validity were checked by a group of experts and the suggested changes were incorporated. The questionnaire was then pilot tested and necessary corrections done.

Independent samples t-test was applied for comparison of a continuous variable among the two groups. Chi-square test was applied for comparison of a pair of categorical variables. Mid-P exact p-values were estimated where the assumptions of chi-square tests were not valid (80% of expected cell values were <5 or 1 of the expected cell values was <1). Open Epi software version 2.2 was used to do all the statistical analyses.[6] Multiple logistic regression was done by the ‘enter’ method, considering discontinuation of the MDR-TB regimen as the dependent variable and entering the following variables as the independent variables (predictors predicting discontinuation) in Step 1: age in years, years of schooling, being single (unmarried), duration of treatment, being in the intensive phase of regimen, presence of ADR and per capita income. Adjusted odds ratios with 95% CI were calculated. A p value <0.05 was considered significant. 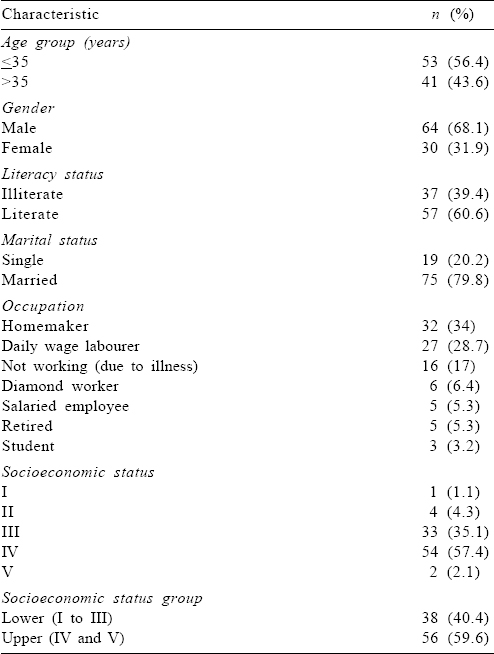 On average, the time since diagnosis of MDR-TB was 14.2 months and patients were on MDR-TB drugs for 17.2 months. A majority of them (95%) had taken Cat-I/Cat-II drugs previously, while only 2% had taken MDR-TB drugs before being put on the current regimen. Among the 94 patients, 49% were in the intensive phase; 43% were in the continuation phase and 8% were taking the Modified Cat-IV regimen. Regarding addictions, 20.2% were tobacco chewers, 5.3% were tobacco smokers and 2.1% were addicted to alcohol. Of the 5 patients presenting with comorbid conditions, 3 had diabetes, 1 had HIV and 1 had chronic renal failure. Of the 3 patients with abnormal blood investigations, 1 had a serum creatinine level of 4 g/dl and the other two had serum uric acid level of 10.9 g/dl.

The prevalence of ADRs among patients with MDR-TB was 73% with 69 patients having at least one ADR. [Table - 2] lists the ADRs of MDR-TB drugs among the respondents. Only 1 of the 94 patients was coinfected with HIV and was on antiretroviral therapy (ART; tenofovir, lamivudine and efavirenz). The CD4 count of the patient was 94 cells/cmm. The patient had a rash, tingling, numbness, vision changes, fatigue and dizziness as ADRs. Since only one patient had HIV coinfection, no comment could be made on the difference in ADRs due to ART. 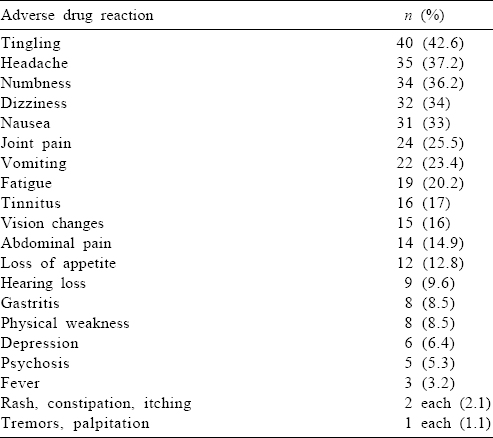 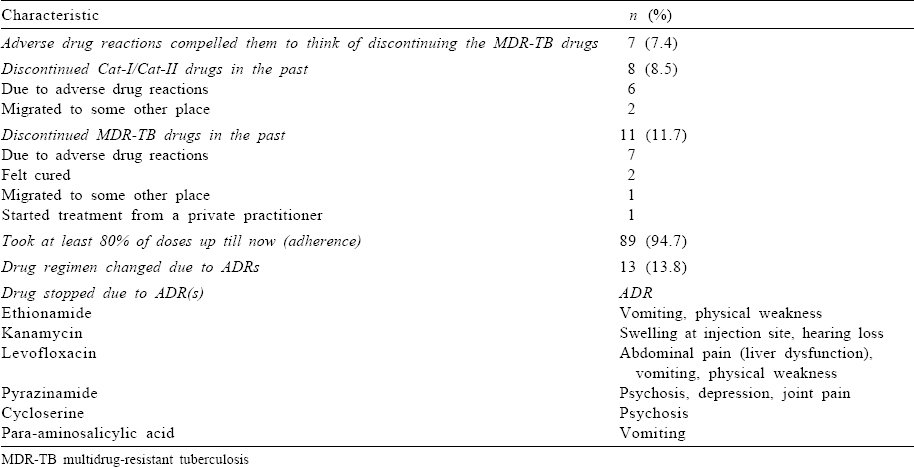 Similarly, there was no statistically significant difference among those having ADR(s) and those not having ADR(s) for years of schooling, per capita income, weight, time since diagnosis of MDR-TB and time since starting treatment of MDR-TB.

There was no statistically significant difference among those discontinuing and those not discontinuing their regimen for age, years of schooling, per capita income, weight, time since diagnosis of MDR-TB, time since starting treatment of MDR-TB and time since experiencing ADR(s).

Adherence to an MDR-TB regimen was associated with a 97.7% reduction in risk of discontinuation than those who did not adhere to their regimen. Tobacco chewers were four times more likely to discontinue their MDR-TB regimen than those not chewing tobacco. Those who were compelled to think of discontinuing their regimen due to ADR(s) were seven times more likely to actually discontinue than those who were not compelled to think so. Discontinuation of the MDR-TB regimen was not statistically significantly associated with age group, gender, literacy status, marital status, socioeconomic status, drug regimen, presence/absence of comorbid conditions, tobacco smoking, alcohol addiction, presence/absence of ADRs and change in drug regimen due to ADRs.

On multiple logistic regression, none of the predictors were found to be statistically significantly associated with discontinuation of the MDR-TB regimen [Table - 4].

Only one patient was reactive for HIV in our study, which was also the case in another study done in Ahmedabad.[9] A study from Lucknow mentioned that none of their 98 patients with MDR-TB had HIV coinfection.[2] Hence, to study the difference in ADRs among HIV-infected and non-infected patients with MDR-TB, we need a larger sample size.

As our study was done in one district, its generalizability to the entire state of Gujarat is questionable. As the sample size was small, our study was not able to compare the ADRs among patients with MDR-TB with or without HIV coinfection.

The frequency of ADRs among patients with MDR-TB is high. Twenty-three patients reported ADRs in our study; tinnitus, headache, numbness, dizziness and nausea were the most common ones. ADRs often compel patients to think of discontinuing treatment and their regimen needs to be changed due to it. ADRs were the main reason for discontinuation of treatment of TB.

A close watch on the occurrence of ADRs and appropriate alteration in treatment of such patients with MDR-TB may allow for a higher compliance to treatment.

This study was financially supported by The Tuberculosis Association of India, New Delhi.