Burden of falls among elderly persons in India: A systematic review and meta-analysis

Background. Falls are one of the leading causes of death and disability among elderly persons. In India, there is paucity of data on the prevalence of falls, particularly among community-dwelling elderly persons. To estimate healthcare costs related to falls and formulation of fall prevention strategies, there is a need of reliable estimates of magnitude of falls. We aimed to provide a community-based pooled estimate of the burden of falls among elderly persons in India.
Methods. A systematic literature search was done manually as well as electronically through PubMed, Google Scholar, Cochrane library, IndMed, Embase and WHO databases. Community-based original studies conducted in India were included. No restriction for the date was used. Meta-analysis was done using the random effects model.
Results. Sixteen studies were included in the review and meta-analysis. These studies included a total of 14 844 elderly persons, of which 2707 reported falling. The pooled prevalence of falls was found to be 31% (95% CI 23%–39%). There was significant heterogeneity between the studies (I2 = 98.08%, p<0.01).
Conclusion. There is a high prevalence of falls among elderly persons in India. However, the available studies have considerable methodological variations and are of limited quality. Realistic estimates are required for designing programmes for prevention of falls and for rehabilitation.

There has been a dramatic demographic transition in India during the past five decades. The increase in life expectancy has resulted in a substantial rise in the number of elderly persons. In 2011, India had 98 million people aged 60 years and above. It is expected that this number will increase to 143 million by 2021.1 However, the elderly in India encounter multiple health issues, including various medical and psychosocial problems. Falls are one of the major problems faced by the elderly.

Fall is defined as ‘inadvertently coming to rest on the ground, floor, or other lower level, excluding intentional change in position to rest’.[2]

Falls are one of the leading causes of death and disability among elderly persons. Falls account for 20%–30% of injuries, and for 50% of injury-related hospitalization in this age group.[3],[4] Even when falls do not result in serious injuries, they do have an impact on mobility and functionality of the elderly.

The available community-based studies have reported the prevalence of falls among elderly persons to be 2.4%–50%. Such varying results may be attributed to the difference in study settings, and time criteria for prevalence. High prevalence of falls in these studies reflects the need for interventions to prevent them. However, there is a need for clear understanding of magnitude of falls for reliable estimates of healthcare costs related to falls, as well as the formulation of fall prevention strategies and programmes.

Hence, in view of varying estimates available from different studies, this meta-analysis was undertaken to determine the realistic magnitude of falls among the elderly. This will help in planning of programmes for prevention of falls, as well as designing of services so that falls-related morbidity and mortality may be addressed.

The manual search was done at the B.B. Dikshit Library of the All India Institute of Medical Sciences, New Delhi, and the National Medical Library, New Delhi. In addition to the hard copies, these libraries have an electronic database of catalogue of theses and other reports. An electronic search was done by the authors and the relevant materials were gathered and read. Potentially relevant quantitative and qualitative studies, as well as review articles, were retrieved.

Authors of two studies with certain missing details were contacted through email and their studies included.

For inclusion in the meta-analysis community/population-based original studies conducted in India were considered. Only English language articles were included in this review. No restriction for date was used.

After removing duplicates, all the titles and abstracts were read by two authors independently (RK and ADG). All the concordant and discordant articles, as reviewed by the two authors, at this stage were included for the screening of full text. The full text of all the relevant articles was further read in detail and judged for inclusion criteria by two authors independently. Any discrepancies were resolved by consensus with a third author (SKG). Bibliography of all the selected articles was further read for any additional studies. Any discrepancies about the inclusion of studies were discussed among the authors and were resolved. All studies fulfilling the above-mentioned criteria were included in the systematic review and meta-analysis [Figure - 1].

Assessment of quality of the studies

Quality assessment of the studies was done by using the ‘Joanna Briggs Institute Critical Appraisal Tool for Prevalence Studies’ developed by Munn et al.[5] This tool included the following criteria, applicable to this review: (i) representativeness of the sample; (ii) appropriateness of the recruitment method; (iii) adequate sample size; (iv) description of study subjects and settings; (v) objective/standard criteria used for measurement of condition; (vi) reliability of the measurement methods; (vii) appropriateness of statistical analyses; and (viii) accounting for confounding factors/subgroups or differences.

Although we assessed the methodological quality of selected studies; however, there were relatively few studies that addressed our research question. Hence, we included all the studies found eligible, irrespective of their quality.

To account for between-study variability, we used the random-effects model to yield a pooled estimate of the prevalence of falls in India.

Sensitivity analysis was undertaken to determine the differences in pooled effects by dropping the studies that were found to be influencing the summary estimates, i.e. Thakur et al.[6] and Ravindran and Kutty.[12] Since there was a difference in the duration of recall for falls (nine studies enquired about falls in the past 12 months, six studies asked for falls in the past 6 months and one study did not mention the duration of recall), pooled estimates were calculated separately for studies reporting falls in the past 6 and 12 months, respectively.

Forest plots were generated to show the prevalence proportions with corresponding 95% CIs for each study and the overall pooled prevalence.

All statistical analysis was done using software Stata 12.0 (Stata Corp LP, College Station, Texas, USA) ‘metaprop’ command. The ‘metaprop’ command is used for pooling proportions in a meta-analysis of multiple studies and displays the results in forest plot. It calculates the confidence interval using the Wilson method and quantifies heterogeneity using the I2 measure.

We identified a total of 1303 titles by computerized and manual searching. Of the 882 articles remaining after omitting duplicates, 777 articles were further excluded based on title and abstracts. Of the 45 remaining articles, 29 were excluded for various reasons such as not prevalence studies (n=5), not regarding falls (n=14), not community-based assessment (n=9) and not in elderly (n=1). Thus, we finally reviewed 16 studies for the metaanalysis. These studies which were done from 2003 to 2017 covered various geographical zones of the country: north zone (n=6), south zone (n=5), west zone (n=2) and east zone (n=2) while one was a multi-centric study.

There were 14 844 elderly individuals surveyed across these 16 studies, of which 2707 individuals reported falling. All the studies interviewed elderly ≥60 years except Johnson and David and Samuel[9] who used age groups of ≥58 years and ≥65 years, respectively. In 12 studies, the sampling strategy has been described as random sampling. 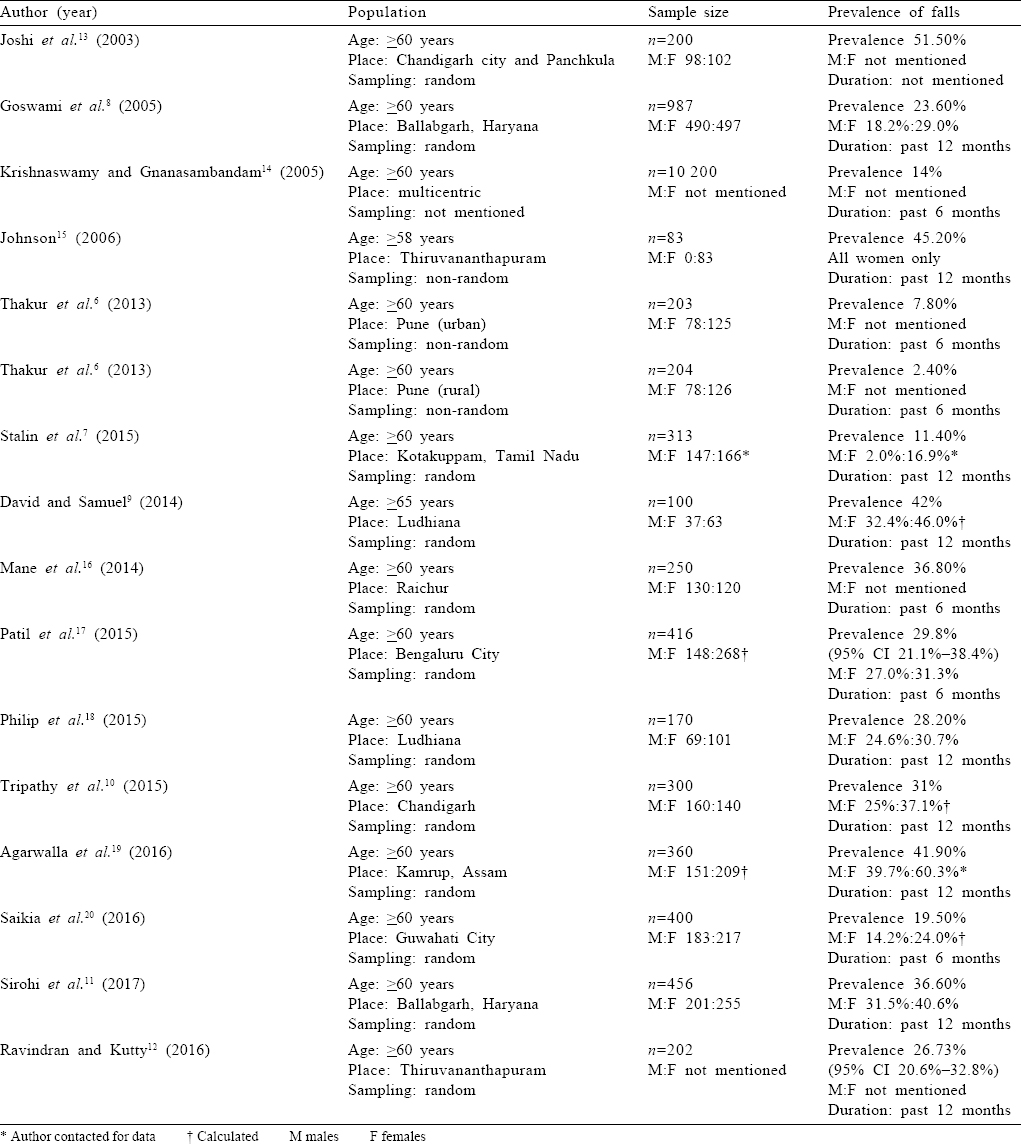 Table 1: Community-based studies on prevalence of falls among elderly included for meta-analysis

A sensitivity analysis was performed after dropping the studies[6],[12] that influenced the pooled estimates. This analysis showed the random effects pooled estimate of the prevalence of falls to be 31% (95% CI 23%–39%). There was significant heterogeneity between the studies (I2=98.08%, p<0.01; [Figure - 3]).

Falls have been recognized as one of the leading causes of death and disability among elderly persons. Besides being more vulnerable to falls due to decreased sensory and locomotor abilities, the elderly are more vulnerable to injuries due to fragility of organs; and time to recover is long due to the slow recovery process.

The prevention of falls has been identified as one of the important measures, which can improve the quality of life among the elderly, and can optimize their health and well-being. With increase in population of the elderly in India, there is a need for clear understanding of the magnitude of falls.

We found a pooled prevalence of 27% (95% CI 22%–33%) in our review. The majority of studies included in this meta-analysis were cross-sectional studies and included data obtained from self-reported history of fall. This might have led to recall bias, resulting in either underestimation or overestimation of burden of falls. Moreover, individuals who might have died due to fall could not be considered in such studies, leading to Neyman bias.

There are few other limitations in our meta-analysis. There was considerable variation in the methodology of the studies included. Most of the studies were conducted in urban settings, while few were in rural settings. The duration of recall for history of fall is also different in various studies. The studies showed high degree of heterogeneity (I2=97.9%). In sensitivity analysis after removing the studies that influenced our results, pooled prevalence was found to be 31% (95% CI 23%–39%), and I2 was found to be 98.0%. The pooled estimate for studies that reported falls in the past 12 months was similar to the overall pooled estimate (31%; 95% CI 23%–39%).

Another limitation of the present analysis is that it may be subject to publication bias. Moreover, we included articles published only in the English language. Although the studies were assessed for quality, we included all the studies in the meta-analysis due to their limited number. Subgroup analysis (by age, gender and place of residence) was not done due to small number of studies.

However, the strength of our review is that we included only community-based studies. The sample size (14 844) is also large, which increased the likelihood of reasonably precise pooled estimate. An effort was made to include unpublished work and grey literature. For details, individual authors (Stalin and Ravindran) were contacted. Separate analysis was done according to the duration of recall for fall (6 and 12 months).

Nearly one-fourth of the elderly experience falls in the community; the overall prevalence being 31%. However, this evidence is of limited validity due to methodological variations across studies. Nationally representative estimates are required to develop programmes for prevention and reduction of falls, including rehabilitation.