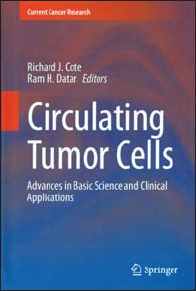 The past 15 years have witnessed unprecedented advances in our basic understanding of the biology of malignant neoplasms paving the way for a so-called era of precision medicine. The latter, in my opinion, is a much-abused term that has been used to convey a variety of ideas, not all of them ‘precise’. This book is a collection of thoughts by accomplished researchers on one emerging cog in the wheel of precision medicine—the idea that solid tumours can be repeatedly characterized not by the old way of biopsy using a gun or a trucut needle but by sampling peripherally circulating venous blood, and thus isolating tumour cells. This idea is intuitive, simple and lends itself to broad application across a range of tumours—and yet, circulating tumour cell (CTC) estimation has not become a major test in the overall framework of cancer management despite being in existence for more than 15 years. One of the main reasons is perhaps the technical challenge of accurately and reproducibly estimating a ‘needle in a haystack’—a few cells from a solid tumour that are shed in circulation among a sea of haematological ones. Moreover, any test in the current era needs to be developed as a ‘companion’ biomarker that ‘predicts’ for benefit (or lack of it) from a defined drug or treatment strategy. Immuno- histochemistry for oestrogen receptor and more recently PD-L1,[1] mutations in genes encoding for epidermal growth factor receptor (EGFR) and RAS and translocations involving anaplastic lymphoma kinase (ALK) are but a few examples. Unfortunately, CTC assays have not been a component of this strategy, which is mainly the result of collaboration between pharmaceutical and diagnostic companies. Unfortunately, one important randomized trial in metastatic breast cancer that used CTC to decide treatment failed to prove its therapeutic role.[2] Now, CTC is in danger of being more or less bypassed by the emerging new techniques of ‘liquid biopsy’ by evaluating circulating cell-free DNA[3] or exosomes. Nevertheless, CTCs have one feature—ability to be characterized at the cellular level and even cultured/grown–that sets them apart from other forms of liquid biopsy. Thus, there is continuing interest and promise in this field.

This book is a contemporary and comprehensive collection of reviews on technologies for estimating CTC, their genomic and functional characterization and clinical applications. In addition, some themes of fundamental importance to tumour biology such as dormancy, metastatic dissemination and metastatic growth are also discussed in considerable detail. I especially enjoyed the chapter on tumour dormancy by Allan and Chambers, which outlines the evolution of this idea and its current theoretical construct supported (as yet) by somewhat sparse experimental evidence. The other chapters are also written in a lucid style and can serve as ‘stand-alone’ reviews for readers desirous of accessing information, references and thoughts by established researchers. The book will prove to be a useful resource for graduate students and established researchers with an interest in this field. It can provide a definitive source for the much-needed but often neglected theoretical framework for hospitals and laboratories desirous of establishing a CTC assay, in addition to providing practical tips. It should be included in the collection of libraries that cater to oncology clinicians, laboratory personnel as well as basic researchers. Thus, it would be appropriate on the library shelves of many hospitals, universities and research institutions in India.