Dermatological diseases in the elderly: An observational study at a tertiary care hospital in northern India

Dermatological diseases in the elderly: An observational study at a tertiary care hospital in northern IndiaDermatological disorders are a common cause of morbidity in the elderly. With an ever increasing population of the elderly it is important to understand the main dermatological problems related to ageing. We did a cross-sectional observational study, approved by our institutional ethics committee, of all patients of either gender, aged 60 years and above, attending the geriatric outpatient department at our tertiary care hospital, between 2014 and 2016. After obtaining consent, a detailed history was followed by examination of the skin, mucosae and nails. Any associated systemic disease was also noted. Data were entered in an Excel sheet and were analysed using descriptive statistics. SPSS software version 18 was used. The data were expressed in frequencies and percentages.

A total of 530 patients aged 60 years and above were analysed. Of these, 320 (60%) were men and 210 (40%) were women. The minimum age was 60 years and the maximum was 90 years. Derma- tological manifestations related to ageing were predominantly senile pruritus, skin tags, freckles, lentigines, cherry angioma, seborrheic keratoses, dermatoses papulosa nigra, wrinkling, senile comedones, senile purpura, xerosis, keratoderma, callosity, sebaceous gland hyperplasia, epidermoid cyst and Favre-Racouchot syndrome and were observed as overlapping dermatoses in 290 (54.7%) patients [Figure - 1]. These were the primary complaints in a few, while others were not bothered by these. Senile pruritus was reported by 140 (26.4%) patients.

Cutaneous infections constituted the most common dermatological disease in our patients and were present in 210 (39.6%) patients [Table - 1]. 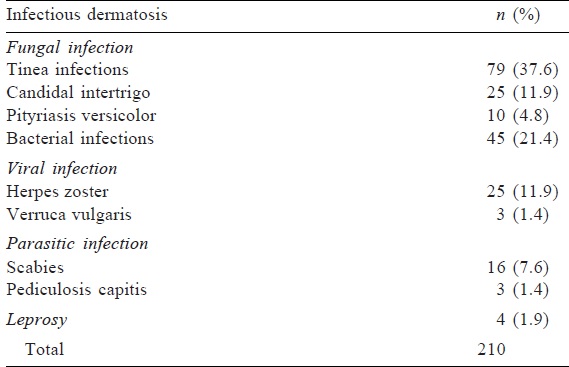 Allergic contact dermatitis mostly due to hair dye and mustard oil were diagnosed in 24 (4.5%) patients, and photoallergic contact dermatitis and air-borne contact dermatitis were seen in 8 (1.5%) and 4 (0.75%) patients, respectively. Neuropathic dermatoses which included post-herpetic neuralgia, diabetic and trophic ulcers were observed in 18 (3.4%) patients. In the immunobullous group, 4 had bullous pemphigoid, 2 had pemphigus vulgaris, while 1 had linear IgA disease. Three patients presented with fixed drug eruption, 6 with lichenoid drug eruption (either to antihypertensive or antidiabetic drugs they were on), while 1 with antitubercular therapy-induced erythroderma. Disorders of pigmentation were also observed and included melasma (20), idiopathic guttate hypomelanosis (135), vitiligo (8), toxic melanosis (4) and post-inflammatory hypo-/hyper- pigmentation (40). Malignant conditions such as basal cell carcinoma were seen in only 2 patients, and squamous cell carcinoma in 1 patient.

Cutaneous infections and infestations (39.6%) were common in our series. Fungal infection was the commonest followed by bacterial infections, which was similar to other studies.[2]·[9] The high frequency of infections in our study could be attributed to high temperatures in Delhi, leading to excessive sweating and overcrowding promoting cross-infection in the family.

Pigmentary dermatoses constituted the third most common group of dermatoses in the the elderly. Idiopathic guttate hypomelanosis is a common, benign pigmentary disorder related to ageing which mimics vitiligo that compels the patient to seek consultation. It was seen in 25.4% in our study, which is similar to other studies.[3],[10] However, Raveendra reported a higher frequency of 33% in his study.[2] The incidence of psoriasis in our study was 5.8%, while in various other studies, it ranged from 1% to 11%.[3],[11],[12],[13] Nearly 12% of patients presented with eczematous disorders, the commonest being asteatotic eczema. This incidence is slightly low as compared to other studies where it ranged from 11.9% to 58%.[2],[7],[9] Immunological disorders were seen in 8% of our patients. The incidence in other studies ranged from 0.5% to 4.1%.[1],[14],[15] The incidence of allergic dermatitis in our patients was 6.8%. This was mostly seen in the group using hair dye and mustard oil. Other studies reported an incidence ranging from as low as 1.5% to as high as 58.7%.[5],[16],[17] This variation may be on account of regional, cultural, environmental and occupational differences.

In various studies, the incidence of bullous disorders ranges from 0.5% to 4.4%, while in our study, it was 1.3% with bullous pemphigoid being the commonest presentation.[1],[2],[7],[10] Trophic ulcer was seen in 8 (4%) cases in a study done by Raveendra.[2] A large number of geriatric patients are on a number of drugs for their comorbid conditions and hence are at higher risk for developing drug-induced dermatoses. The incidence of drug-induced dermatoses in our study was 1.8%.

Associated comorbid conditions such as hypertension and diabetes predispose the elderly to several dermatological diseases and we suggest that multispecialty, one-stop clinics are required for the elderly to minimize inconvenience and for expediting the management of multiple problems including those related to the skin.