Background. We aimed to generate evidence on the social and economic impact of out-of-pocket expenses incurred by households on illness.
Methods. We did a hospital-based cross-sectional study including a convenience sample of 374 inpatients and outpatients.
Results. The median illness expenditure was the same (₹62 500) for inpatients and outpatients. Of all respondents, 51.3% among the rural and 65.5% among the urban patients were employed before illness, but after illness only 24.4% among the rural and 23.4% among the urban patients remained in employment. The proportion of rural households of different socioeconomic categories that experienced decrease in expenditure on food, education and health, and those who had to sell land or cattle, and the education of whose children suffered was statistically significant. The proportion of indebted families in different socioeconomic classes was also statistically significant among both rural and urban patients. The lowest socioeconomic strata depended mostly upon the financial support of their friends to tide over the financial crisis of an illness.
Conclusion. Our study shows that out-of-pocket expenses on healthcare are a burden not only for the poor but also the middle classes.

Verbal consent was obtained from each respondent before filling the proforma. The interviewer explained all the pertinent information related to the study, allowed the respondents to ask questions and verified that they understood what was explained to them. We enrolled a convenience sample of 374 respondents; all patients recruited in the study had an illness for less than a year.

We used a predesigned and pretested semi-structured interview schedule with both closed-ended and open-ended questions containing information on various study variables. Pretesting of the interview schedule was done by administering it to 20 participants. The data collected from pretesting are not included in the results presented. We administered the questionnaire to patients and/or any adult family member close to them.

Table 1: Sociodemographic profile, per capita income and expenditure on illness among the patients studied

Among rural respondents, 51.3% were employed before their illness but only 24.4% were employed after the illness. The corresponding figures for urban respondents were 65.6% and 23.4%. Both changes were statistically significant. Similarly, there was a significant decrease in the mean number of earning members per family after the illness [Table - 2].

Table 2: Distribution of patients by change in employment status after illness

The economic and the social impact of illness on rural as well as urban families in terms of decrease in expenditure on food, education and health, as well as the need to sell land or cattle and the impact on the education of children was statistically significant [Table - 3]. Similarly, the proportion of urban households of different socioeconomic categories, which experienced decrease in savings and expenditure on food and health, as well as households where the spouse started working were significant [Table - 3]. 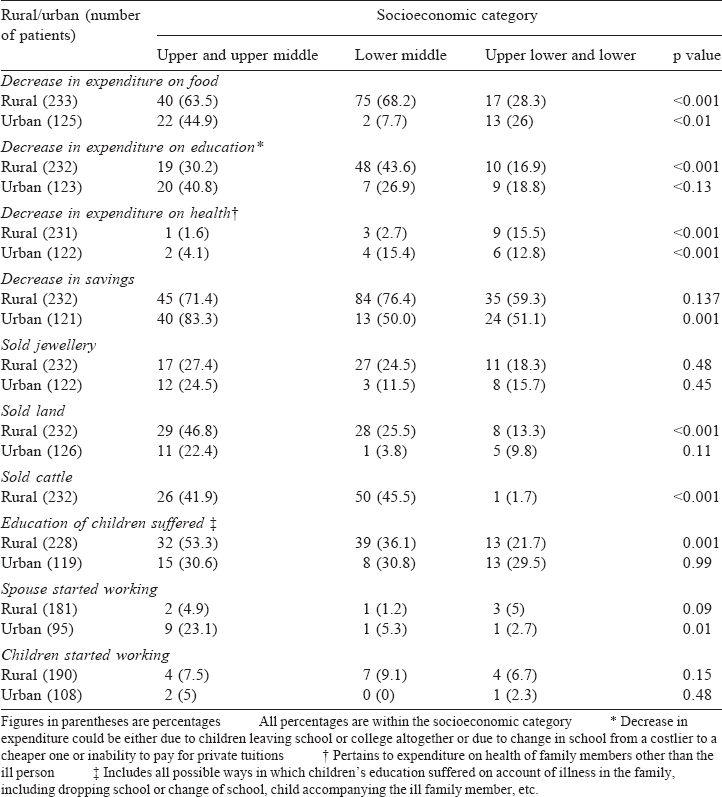 Table 3: Distribution of social and economic changes due to illness among patients of different socioeconomic categories 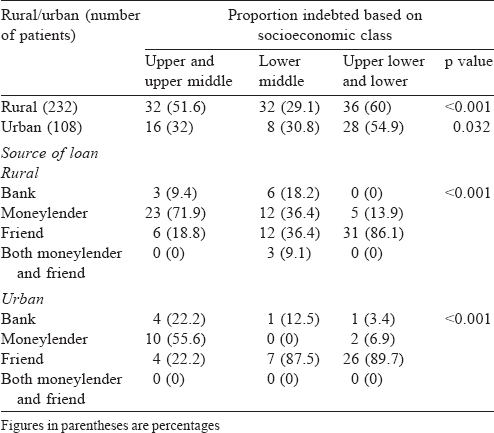 The Constitution enshrines India as a ‘sovereign socialist secular democratic republic’,[5] so it is important to highlight the political context of high out-of-pocket costs on healthcare in India. On the other hand, the USA is a beacon of entrepreneurial capitalism. A comparison of the health financing indicators of India and the USA brings out the paradox [Table - 5].[6] For each indicator, the USA seems to be more ‘socialist’ in the delivery of healthcare compared to India. 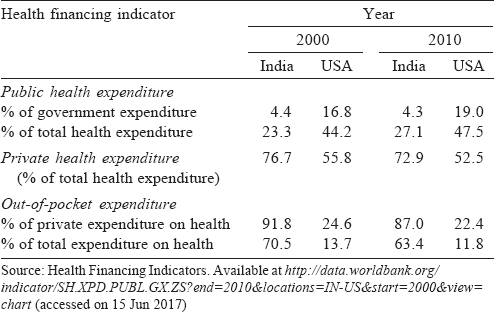 Table 5: Comparison of health financing indicators between India and the USA

While our results show similar expenditure among outpatients and inpatients, this is due to a large number of patients with chronic illnesses being included in our study. As many of the inpatients had been on long follow-up and had been treated earlier as outpatients, it was not possible to categorize illness episodes as outpatient and inpatient. This is a limitation of our study and an aspect that needs to be addressed in the methodology in future studies.

High out-of-pocket expenses on illness of a patient can not only impoverish the family, but can make the economic recovery challenging. This has been variously described as a ‘poverty ratchet’[7] or ‘medical poverty trap’.[8] WHO estimates put nearly a 100 million people around the world who are poor due to healthcare costs, while another 150 million suffer due to catastrophic expenditure on health.[9] Many studies from India have shown that people have been pushed into poverty on account of out-of-pocket expenses on healthcare.[2],[10],[11]

A household confronted with an illness is obliged to meet varied expenses—the cost of treatment and transport, opportunity costs for the sufferer and caregivers and the cost of caring, besides other routine household expenses. The process of meeting these costs can impact household consumption expenditure and the standard of living. Households may simultaneously adopt coping strategies such as borrowing money at high interests, cutting back on food consumption, sale of assets, etc., which potentially push them into a cascading cycle of poverty. Gertler and Gruber[12] provided evidence of health shocks leading to decreased supply of family labour and thereby reduced family incomes. Russell[13] has shown that for a family surviving on a daily income barely enough to meet minimum dietary requirements, even a minor illness may well prove to be the proverbial ‘last straw’. Evidence shows that the consequences of health shocks are not borne equally by members of the household, with women and children being worse off.[14] Social class[15],[16],[17] and caste[15],[18] are important determinants of how successfully a household can weather a health crisis.

We have used the lessons drawn from the above studies to map our conceptual understanding of the pathways to economic and social impact of out-of-pocket expenditure on healthcare [Figure - 1].

Socioeconomic class and cost of treatment

The results of our study can be understood only in the ‘context’ of related developments in society with respect to healthcare. This ‘context’ is defined by the National Sample Survey Organization (NSSO) data.

We found that people from lower socioeconomic background were a minority in our sample while one would expect them to comprise a majority of patients at public health hospitals. As we used a convenience sample it is possible that this was by chance, but it could also suggest that treatment even in public hospitals is gradually getting out of reach for some of the poorest sections of society.

There has been a rise in the cost of treatment in both public and private hospitals, after adjusting for a general rise in prices [Table - 6]. Moreover, the rise has been marginally higher in public hospitals as compared to private hospitals. In successive NSSO rounds there has been an increase in the number of untreated ailments due to financial reasons [Table - 7].[19] Hence, the perception that treatment in public hospitals is subsidized is gradually withering away. This, in our opinion, is a consequence of a policy that has promoted, directly or indirectly, large-scale commercialization of services of public hospitals and user charges for different services have become the norm rather than an exception.

Table 6: Average expenditure (₹) per hospitalized person during past 365 days by type of hospital, over different NSS rounds

Table 7: Number per 1000 spells of ailment during past 15 days untreated due to financial reason over different NSS rounds

While for a lower socioeconomic class access to any form of healthcare is difficult, even the middle and upper sections of the society are finding healthcare to be expensive and at times beyond their means. However, user charges in public hospitals are exempted only to those who have a below poverty line (BPL) card. The problems of public policy on this issue is further illustrated by how the middle and high income groups are defined based on the national consumer expenditure surveys [Table - 8].[20] In 2004–05, a daily per capita expenditure (DPCE) of ₹93 was categorized as ‘high income’. The average cost of hospitalized care in a government hospital in rural areas in 2004 was ₹3238 [Table - 6]. If we presume an average stay of 7 days for each hospitalization, ₹3238 would amount to an expenditure of ₹462.6 per day per hospitalization. For a person with a DPCE of ₹93 this would be an enormous additional burden.

Among the reasons for rising costs of treatment is that consumables such as medicines are often not available and need to be purchased.[1],[21] Due to long waiting times for diagnostic investigations, patients often need to or prefer to get these done at private diagnostic centres. There is also a tendency to over-investigate patients and practise ‘defensive’ medicine.

Loss of employment due to illness

There was a significant decline in the employment status of both urban and rural patients. As we did not gather information on the sector (organized or unorganized) and nature of employment (formal or informal), we can only surmise the reasons for this decrease. Possibly, most patients and their family members were either self-employed or informal workers in the organized/unorganized sector. Such employment provides little job security during an illness.

The movement by the government in the 1990s to outsourcing led to a change with more workers in the informal sector [Table - 9].[22] This has had implications [Figure - 1] for such households on account of expenditure on healthcare in the absence of any healthcare cover/insurance being made available to them.

In rural India, social classes are based on ownership of land. The lower socioeconomic classes are usually landless agricultural labourers or marginal farmers while the upper classes have land holdings.[23],[24] This is reflected in the significant difference in the proportion of rural households of different classes who had to sell land to meet expenditure on illness. The same could be the case with sale of cattle where again the difference in the proportion of families among different classes resorting to sale was significant.

Indebtedness status and the source of loan

The lower socioeconomic classes were expectedly the most indebted; but next to them were the upper and the upper middle classes rather than the intermediate class. Among rural upper and upper middle class families, more than 50% were indebted; this corroborates our finding that among these classes the proportion of families who sold land and cattle was 46.8% and 41.9%, respectively. Even though the lack of availability of institutional loans at low rates of interest to meet illness expenses is of concern, it must be noted that even for the better off sections it is the moneylender who is the source of immediate relief. On the other hand, the poor go without treatment if they fail to raise money from friends and relatives as they are shunned both by banks and the moneylender due to their low creditworthiness.

Our study shows that out-of-pocket expenses on healthcare are not only a formidable obstacle for the poor, but also a drag for the ‘middle classes’ of India. Scrapping ‘user charges’ altogether from the public health system is imperative to improve access to healthcare for large sections of our population.