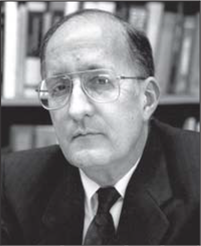 Medical journals are not often forces for change. Their editors are usually quiet scholars who serve their terms, then move on. Annals of Internal Medicine Editor Emeritus Edward J. Huth was different.

A graduate of the University of Pennsylvania (Penn) School of Medicine, Huth was part of the Renal Unit at Penn, doing research on renal physiology. In 1960, he joined his Penn colleague, J. Russell Elkinton, at the American College of Physicians to help edit Annals on a part-time basis. At the time, Annals was considered an archival journal, publishing papers primarily from the College’s annual meeting, with the manuscripts reviewed solely by the editor. Prose styles were stilted and formal. Standards for presentation of data and for conducting research were whatever the authors’ institutions required, and varied widely.

Huth was only in his late 30s when he got captured by medical editing, the beginning of a career of over 50 years. By 1965 he moved to full-time editing, and when Elkinton retired in 1971, Huth was named Annals editor in chief. He and Elkinton had already transformed the journal by introducing peer review to improve content and thorough copy editing to improve readability. They added a letters-to-the editor section, editorials commenting on content, and material on ethical issues and the medical humanities. Their goal was to have Annals content define the field of internal medicine.

Like all editors, Huth sought the best papers. Breakthrough research on AIDS, the first uses of cis-platin in cancer, early research on Legionnaire disease, and papers from the Framingham heart study increased the impact of the journal. A firm believer in the value of synoptic material, he implemented criteria for better review articles and systematic reviews, which are often highly cited.

In 1987, Huth and Brian Haynes of McMaster University in Ontario developed the structured abstract, and Annals was the first to use the format that is now standard in many clinical journals. As a master class in the fundamentals of evidence-based medicine, Haynes and Huth developed a separate publication, ACP Journal Club, to assess the internal medicine literature. Other innovations included Annals being the first American journal to publish full text online (1984) and being among the first journals to use confidence intervals for statistical reporting.

Early in his career Huth reached out to other editors in the medical publishing system. Different editors had different requirements for submission of manuscripts. Before desktop computers, a paper rejected by one journal had to be entirely retyped to meet the submission requirements of another journal. Why couldn’t a single format for submissions be used?

Huth and other editors and librarians met in Vancouver, BC, in 1979 to establish the International Committee of Medical Journal Editors (ICMJE, the Vancouver Group). Coordinated by Huth and Stephen Lock, editor of the British Medical Journal (BMJ), the group agreed on a set of standards called Uniform Requirements for Manuscripts Submitted to Medical Journals (URM). The ICMJE initially listed journals that supported the requirements, but when over 500 had agreed, the list was not updated. The URM has become the de facto standard for submissions to medical journals worldwide.

The ICMJE then issued guidelines on other key aspects of reporting medical research: criteria for authorship, conflicts of interest, the roles of advertising, statistical analysis, metric units, and many others. Forty-two years later, and with expanded international membership, the group is now affiliated with the World Association of Medical Editors (WAME) and has provided important support for new journals and new editors. Huth personally advised the founding editor of The National Medical Journal of India and served on the editorial board.

Matters of editorial style were always a Huth concern, and again he sought standardization. The style committee of the Council of Biology Editors (now the Council of Science Editors, CSE) had issued a brief style manual in 1960, with conventions from international standards groups. Ed joined the style committee for the third edition (1972), which doubled in size, but was still not widely adopted. Huth chaired the group for the CSE Manual sixth edition (2006), which was nearly 800 pages and covered all the life sciences, physical sciences and mathematics. This manual has now become one of the principal scientific style references in editorial offices.

To address a need for more specialized guidance, Huth authored books on how to write for medical journals, with the third edition, Writing and publishing in medicine, issued in 1999. He lectured widely, giving over 200 presentations and taught a course at Penn on the fundamentals of medical research. After his retirement from Annals in 1990, he was editor of the Online Journal of Current Clinical Trials for several years and continued to write articles, review books, and edit books for another 20 years, further enhancing his international reputation as medical journals’ leading scholar.

He and his wife of 64 years raised two sons and have five grandchildren. The Huths travelled widely, partly in support of his many volunteer activities. He was president of the Council of Biology Editors and the American Medical Writers Association and a Regent of the US National Library of Medicine. Always fascinated by history, Huth co-authored two histories of Annals and combined his interest in evidence-based medicine and history to help support the James Lind Library of the Royal College of Physicians of Edinburgh.

Among his many post-retirement activities, Huth and noted neurologist T. Jock Murray of Dalhousie University in Nova Scotia, compiled two editions of a collection of medical quotations. Murray, an experienced author and editor, noted recently, ‘Working with Ed was going back to school on the processes of meticulous editing, writing, citing and researching for publication. There was a good reason he was often referred to as the dean of medical editors.’