Errors of inclusion and exclusion in income-based provisioning of public healthcare: Problems associated with below poverty line cards

This study examined the effect of out-of-pocket expenditure of patients on their illness and other household changes impacting on their well-being, and assessed the socioeconomic status and below poverty line (BPL) card status among patients at the All India Institute of Medical Sciences, New Delhi. We did a hospital-based cross-sectional study of 374 inpatients and outpatients. Among the 374 study subjects, more than 69% of poor did not possess a BPL card. On the other hand, 5.5% of the above poverty line patients among the respondents possessed a BPL card. Of those having BPL cards, 84.4% belonged either to the lower middle, upper lower and lower socioeconomic status categories. Our data suggest that the inaccuracies in providing BPL cards limit access of the genuine poor to healthcare. In the light of national-level surveys on accessing healthcare and out-of-pocket expenditure by patients there is a case against ‘targeting’ in the delivery of public health services and user charges have an adverse impact on access to healthcare by the poor.

Levying of user charges at the time of availing healthcare services is widely prevalent in publicly financed healthcare in India. This practice affects the ability of the poor to access healthcare services is often dismissed on the ground that those possessing below poverty line (BPL) cards are exempt from such payments. A few hospital-based studies provide evidence[1] that there are major errors in the inclusion and exclusion of people in the BPL category. Hence, whether poor patients are actually being excluded from the healthcare safety net remains a matter of conjecture. We did this survey at the All India Institute of Medical Sciences (AIIMS), New Delhi to examine the effect of out-of-pocket (OOP) expenditure of patients on their illness, dietary consumption and other household changes, as well as to assess the socioeconomic and BPL card status of the respondents.

This hospital-based, descriptive, cross-sectional study was done among outpatients and inpatients of the Departments of Gastroenterology and Human Nutrition, and Cardiology as well as Comprehensive Rural Health Services Project hospital, Ballabgarh, Haryana between September–October 2005 and January 2006. The patient and/or any adult family member was the respondent. After obtaining verbal consent, the interviewer explained all the pertinent information of the study and allowed the respondents an opportunity to ask questions and verified that they understood the information.

A pre-designed and pre-tested semi-structured interview schedule with both closed- and open-ended questions was used. The interview schedule was pre-tested by administering it to 20 participants (data not included in this study). Besides questions on per capita income, dietary consumption, expenditure patterns, indebtedness, specific questions on the BPL card were asked including those related to awareness, possession, the ‘free of cost’ services using the card, if eligible have they made efforts to obtain such a card, what problems were faced while making such a card, have they seen/heard of a bribe being paid for making a BPL card, whether they have availed of free treatment at a government hospital using the BPL card, etc.

The patients' family per capita income was also asked for and their socioeconomic status as per the Kuppuswamy socioeconomic[2] status scale revision for the year 2003 was obtained. The BPL/ APL (above poverty line) bifurcation of the respondents was done using the all India poverty cut-offs for 2004–05 as declared by the Planning Commission (2009).[3] These were ₹446.68 for rural and ₹578.80 for urban areas.

The median per capita income of BPL patients based on the income cut-off was almost half that of those who had BPL cards [Table - 1]. Based on the socioeconomic status, 17.7% (8/45) of those with BPL cards belonged to the lower middle category and 66.7% (30/45) to the upper lower and lower categories [Table - 1]. 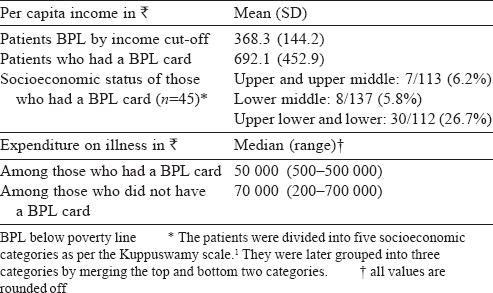 Table 1: Per capita income and socioeconomic status of patients

It is also important that over 50% among those in the BPL category by the income cut-off were not aware of the BPL card.

Poor people being excluded from official security nets are common and have been part of the policy debate in India.[4],[5],[6],[7],[8],[9],[10],[11],[12] Despite the fact that these errors occur in various targeted social sector programmes, policy planners in both developed and developing countries have continued ‘targeting’ and trying to refine the design of these programmes to improve the delivery of social services to the poor.

The evidence from national-level surveys [Table - 2],[Table - 3],[Table - 4],[Table - 5],[Table - 6],[Table - 7] suggests that the strategy of refining designs has not worked. The share of government hospitals for non-hospitalized treatment was already low but this been decreasing over the years even for hospitalized patients [Table - 2]. Thus patients, including those who are in the BPL category have to increasingly depend on private healthcare. This is often because the healthcare facilities are too far (19% responders), they are dissatisfied with the treatment by the doctor/facilities (42%), because of long waiting hours (11%) and lack of required services (5%).[13] Therefore, fewer poor patients are able (or willing) to avail of free treatment that they are entitled to in government hospitals.

Table 3: Per 1000 distribution of hospitalization cases by type of hospital and type of ward as evident from the 60th National Sample Survey (NSS) round

Table 5: Hospitalization expenditure and loss of income (₹) by class and sector

Table 6: Comparative average total expenditure (₹) per hospitalized case during past 365 days by type of hospital—rural and urban, over different rounds of the National Sample Survey (NSS)

Table 7: Number per 1000 spells of ailment during the past 15 days untreated due to financial reasons over different rounds of the National Sample Survey (NSS)

In rural areas, 87.3% of patients from the bottom 20% of the monthly per capita expenditure (MPCE) who sought hospitalization in a government hospital were treated in free wards [Table - 3]. Overall, this proportion was 83.9% for rural areas and 87.8% for bottom 20% of the MPCE and 79.6% all India for urban areas. However, despite the overwhelming number of patients in the bottom 20% being treated under the category of free beds in both rural and urban areas, there was a huge OOP expenditure incurred on hospitalization by these patients [Table - 4]. Much of this expenditure was not due to incidental expenses such as travel, food or accommodation, etc. but due to treatment-related expenses in the hospital. Hence, despite availing of concessions due to BPL patients, there was a large OOP expenditure.

Economic access to healthcare has become increasingly difficult for the poor due to a real increase in the cost of treatment, and financial difficulties have resulted in an increasing proportion of untreated illness [Table - 6] and [Table - 7].

Publicly funded social security nets for the poor can be best ensured when delivered through public facilities. However, deterioration in services at public hospitals has resulted in a drop in their share of hospitalized treatment and even the poor have to access hospitalized care in the private sector. Simultaneously, there has been a real increase in the cost of care in both public and private hospitals over the years, with the rate of increase being marginally higher for public hospitals.[14] This shows that levying user charges in public hospitals on the plea of cross-subsidizing care for the poor by charging those who can afford to pay while exempting those with a BPL card from paying these charges is inappropriate because:

We are not aware of any systematic proactive measures being taken either at AIIMS or at other public hospitals in Delhi, to make poor patients aware of the privileges due to them on possession of a BPL card and the obligation on the part of healthcare providers to honour these provisions. Even if targeted interventions for the poor in hospitals are desirable over universal service delivery, waivers for BPL cardholders can be efficiently facilitated through measures such as posters and notice boards at prominent places within hospital premises providing complete information regarding the rights of BPL cardholders and the process for availing these rights. Help desks can be made available to enable poor patients to avail of their rights. However, getting sanctions for such waivers is cumbersome serving as a deterrent for patients to avail of the facility.

The objective of ‘targeting’ in welfare policy is to narrow down the scope of recipients by applying diagnostic criterion of means or income, through claw back taxes, behavioural requirements or status characteristics.[15]

However, these are camouflaged as ‘cost containment’ and ‘efficiency’ in reaching resources to the genuinely needy because an obvious attempt to dismantle the ‘universal welfare’ model would be untenable in view of its continuing popular appeal, especially in developing countries.

The rhetoric of ‘exempting the poor from user charges’ is further undermined by the receding role of public healthcare in health service delivery. Privatization of the social sector services is a characteristic of the economic liberalization.[16],[17],[18] In India, the growth of private healthcare has come at the cost of public sector healthcare.[19],[20],[21] These developments have implied a gradual deterioration in the services of the public sector due to under-financing and lack of resources resulting in non-availability of drugs and other consumables, non-availability of routine diagnostic tests and deficiency of health manpower. This obliges the patients, including the poor, to source drugs and other consumables and diagnostic tests from the market. All that is then available to them for free is the doctors' consultation, provided they are available, and the hospital bed, presuming that patients are not asked for any informal payments.

As per the 60th NSS round 42.7% of patients even in the bottom 20% of the MPCE class accessed hospitalized care from the private sector [Table - 2]. Thus, if the poor are to be assured of any healthcare services it can be only through strengthening of public provisioning free from the motive of profit.

Our study data are old and hence there may have been changes in the overall performance of the healthcare sector. However, the focus has even recently been on introducing and enhancing user charges. Hence, it is unlikely that the overall situation with regard to access to healthcare with the use of BPL cards has improved. Of all the questions we had planned to ask, data were satisfactorily gathered from all the patients only regarding knowledge and possession of BPL card as these were closed-ended questions with ‘yes’ and ‘no’ answers. Satisfactory data could not be collected with respect to other questions from all the patients because (i) a substantial number of patients did not have any knowledge regarding the BPL card, (ii) many among those who did know about the BPL card or had one were poorly informed regarding the benefits of such a card, (iii) as most were outpatients (82.9%), it was difficult to obtain and record detailed information from them in a crowded outpatient.

The shift from ‘universalism’ to ‘targeting’ in healthcare policy has come with the rightward shift in the political and economic discourse worldwide. This is a generalized thrust towards privatization and commercialization of the healthcare sector where the state is sought to be absolved of its responsibilities towards the welfare of the people. Consequently, all attempts to remedy the numerous errors of exclusion and inclusion in such targeted social sector interventions by improving their design are unlikely to succeed. The need is to create policies to provide healthcare to poor universally without levying user charges or with a motive of profit.