History of medicine in undergraduate medical curriculum in India

Thomas Fuller, an English historian, said: ‘History maketh a young man to be old, without either wrinkles or grey hairs; privileging him with the experience of age, without either the infirmities or inconveniences thereof.’[1] Medicine, as we know today, evolved from the works of centuries of what we may call major and minor breakthroughs. Less than 200 years ago, patients were subjected to restrain and immense pain for even a minor surgical procedure until the anaesthetic property of ether was discovered and used by Crawford Long in 1842.[2] Edward Jenner’s work on the development of smallpox vaccine,[3],[4] a disease that killed nearly 10% of the population at that time,[5] is a monumental milestone in the evolution of medicine. Subsequently, smallpox was eradicated and now remains a part of textbooks only.[6]

History repeats itself, and we must make it our goal to learn from past experiences. Lessons from the past success and even past failures pave the way for future development. The examination of historical manuscripts with perspective of their context teaches how to assess evidence and interpret conflicting evidence.[7] During the early 20th century, it was popularly publicised that cigarettes were good for health, and even physicians were using them. Cigarette brands were featured in popular medical journals and physicians endorsed them publicly. Brands were funding medical conventions and also funding research to substantiate their claims of the benefits of cigarette smoking.[8] It was later that multiple clinical studies established the direct and indirect relationship of tobacco smoking and cancer, and ended the corporate interference of tobacco marketing in the medical sphere.[9]

As noted by Cordell, ‘History of Medicine’ should be taught in medical colleges because, not only does it increase knowledge and curiosity, it also teaches students on how and what to investigate.[10]

James Lind, an English naval physician, was the first to establish that scurvy was cured by citrus fruits in a controlled trial among sick sailors, who recovered by taking citrus fruits and their juices. However, in the following years, he became convinced that citrus fruits offer no cure from scurvy.[11] This was because, instead of fresh juice, he was providing boiled syrup of orange to the sailors. Not knowing the chemical properties of the vitamin at that time, he himself dismissed the utility of citrus fruits in the treatment and prevention of scurvy![12] This shows us that there is a great deal of learning from even errors of the past, which can only be acquired by medical undergraduates from the rich ‘History of Medicine’.

The Medical Council of India (MCI), the apex regulatory body for medical education in India, incorporated teaching ‘History of Medicine’ in the undergraduate medical curriculum, i.e. the MBBS curriculum, nearly a decade ago.[13] Chapter 1: Clause 2, under the heading of ‘General consideration and teaching approach’ of the MCI Regulations on Graduate Medical Education, subclause 19 states that: ‘The students will be given an outline on “History of Medicine”. This will be taught in an integrated manner by subject specialists and will be coordinated by the Medical Education Unit of the College.’[14]

Why Teach ‘History of Medicine’?

Amidst reports of professional burnout among medical students,[15] and depression and stress among them,[16] one could ask if introducing this additional topic is really the need of the hour.

The undergraduate medical curriculum today is flooded with subjects which serve scientific facts per se. Understanding the ordeals of the past, and the struggles attached to those facts is expected to inculcate a sense of pride and identity in the physicians of tomorrow,[17] making the subject easier to comprehend and retain.

Medicine is both a science and an art, which is perfected over time.[18] ‘History of Medicine’ is also plagued with sordid tales of physicians who practised unorthodox, often barbaric, therapy. The violations of ethics by Nazi physicians, and their subsequent trials in the famous ‘Nuremberg trials’, laid the foundation stone of the Nuremberg code of ethics, which holds true for ethics in medical research till date.[19] Exposing medical undergraduates to these instances can prevent such reprehensible acts from happening again. Thus, the study of ‘History of Medicine’ would help to reinforce humanitarian qualities among doctors.[20]

The medical literature is a gold mine of overlooked discoveries and unexplained hypotheses. It has been established that Sushruta, considered the father of surgery in India, used extraocular cataract expulsion as early as 600 BCE.[21],[22] Over a period of time, this knowledge and skill was lost, and cataract became one of the leading causes of blindness worldwide until the method was discovered by a French surgeon Jacques Daviel 2000 years later in 1747.[23] Within the next two centuries, the medical fraternity has refined this procedure to such an extent that cataract surgery is one of the most commonly performed eye surgeries worldwide.[24]

Medical discoveries are laced with instances which amuse and inspire at the same time. One such instance is the discovery of anaesthetic properties of ether in the middle of the 19th century. Crawford W. Long knew about the exhilarating properties of ether, which was used recreationally at that time, in ‘ether frolicks’. He observed bruises on some of the participants, who had been unaware of pain. Long reported that he inhaled ether for its exhilarating properties on numerous occasions. Frequently, at some short time after the inhalation, he discovered bruises or painful spots on his body, of which he had no recollection of causing. This led him to use it as an anaesthetic in a tumour extraction. The patient, Mr James Venable, had no recollection of the surgery and had to be shown the extracted tumour to make him believe that the surgery had indeed been done. Long's observant nature combined with his willingness to end the misery of pain during surgical procedures was the first step in anaesthesia, which is now a core medical specialty.[2] Such instances inspire medical undergraduates to broaden their perspective and deal with problems with simple and innovative solutions.

With the advent of modern medical equipment, imaging and diagnostic modalities, patient–physician contact is declining leading to de-personalization of the patient–physician relationship. A sense of history and tradition may help students acquire qualities essential to being a good doctor, including, in Sir William Osler's words, ‘that which alone can give permanence to powers––the Grace of Humility’.[25]

Evolution of Teaching ‘History of Medicine’

Sir William Osler, also known as the Father of Modern Medicine, advocated the teaching of ‘History of Medicine’.[25] He established the History of Medicine Society at the Royal Society of Medicine, London in 1912. He proposed the utilization of lectures as well as a Historical Club which sat once a month and systematically discussed the contributions of great epochs in medicine. He also integrated ward teachings with ‘History of Medicine’, such as asking students ‘who was Graves?’ when a patient of goitre was being discussed.[26]

Howell, a Professor of Internal Medicine at the University of Michigan, runs an elective course in ‘History of Medicine’ which enrols six students per month.[29] This course revolves around student participation. The goal of this course is to ignite curiosity among students by a ‘hands-on’ experience, such as visiting the library to read historical manuscripts. Students are also taught not to blindly gulp facts; instead critically appraise them. When confronted with an interesting manuscript, they should not only assimilate the findings but also consider who wrote it, when and why?

Other models of teaching ‘History of Medicine’ are somewhat similar and mainly revolve around teaching it as either lectures or seminars, with emphasis on major historical figures and milestones, and eventual evaluation of the students' knowledge at the end of the term. One such example is the ‘History of Medicine’ seminar as a part of ‘Patient, physician, and society’ course in the University Feinberg School of Medicine, Chicago. Students meet in the library for 2 hours a week for 5 weeks and are encouraged to study the historical manuscripts and rare books available there. Students are free to choose the topic of their choice and are encouraged to lay emphasis on the structure and organisation of the book.[30]

A somewhat similar practice is followed at the University of Alabama, Birmingham, where teaching medical history is integrated with the subject. Students of 1st year taking anatomy are required to visit the Reynolds Historical Library and read the manuscript of De humani corporis fabrica, a book on human anatomy by Andreas Vesalius published in 1543. Vesalius is considered as the father of modern anatomy whose understanding of human anatomy by dissecting human cadavers was remarkable.[31] Students are then required to submit an essay on their experience. The success of this exercise can be assessed by the following remark of an undergraduate medical student presented in the paper by Casey and Flannery: ‘These works not only represent the past contributions of physicians to their practice, but they represent the endless possibilities for my classmates and myself.’[32]

When Should ′History of Medicine′ be Taught?

While perusing various models of teaching ‘History of Medicine’, a question which often arises is when should it be ideally introduced in the undergraduate medical curriculum. A study done by Schulz et al. showed that teaching ‘History of Medicine’ continuously, spread over the entire period of training, starting from the first semester itself had a better outcome in terms of ease in teaching and understanding (teach ability) and better scores in assessment (test ability).[33] The MCI also recommends that the entire educational process in undergraduate medical curriculum be put in a historical background, and presented to the students. It states that the ‘History of Medicine’ should form a part of this process. Budding physicians should be sensitized to the evolution of medical knowledge both in India and across the globe.[14]

Current Status of Teaching ‘History of Medicine’ in India

The National Institute Ranking Framework (NIRF), approved by the Ministry of Human Resource Development of the Government of India, released the 2018 rankings of top medical institutions of the country.[34] A detailed review of the website of these institu-tions and/or the websites of the parent universities of these institutions was undertaken [Table - 1] to assess the current state of teaching ‘History of Medicine’ in the MBBS curriculum. The website of the institutions and parent universities were searched for the availability of a detailed MBBS curriculum online. If available, the curriculum was searched for the inclusion of ‘History of Medicine’. Other documents such as examination syllabus and the teaching schedule were also searched to understand the placement and integration of this topic within the curriculum. 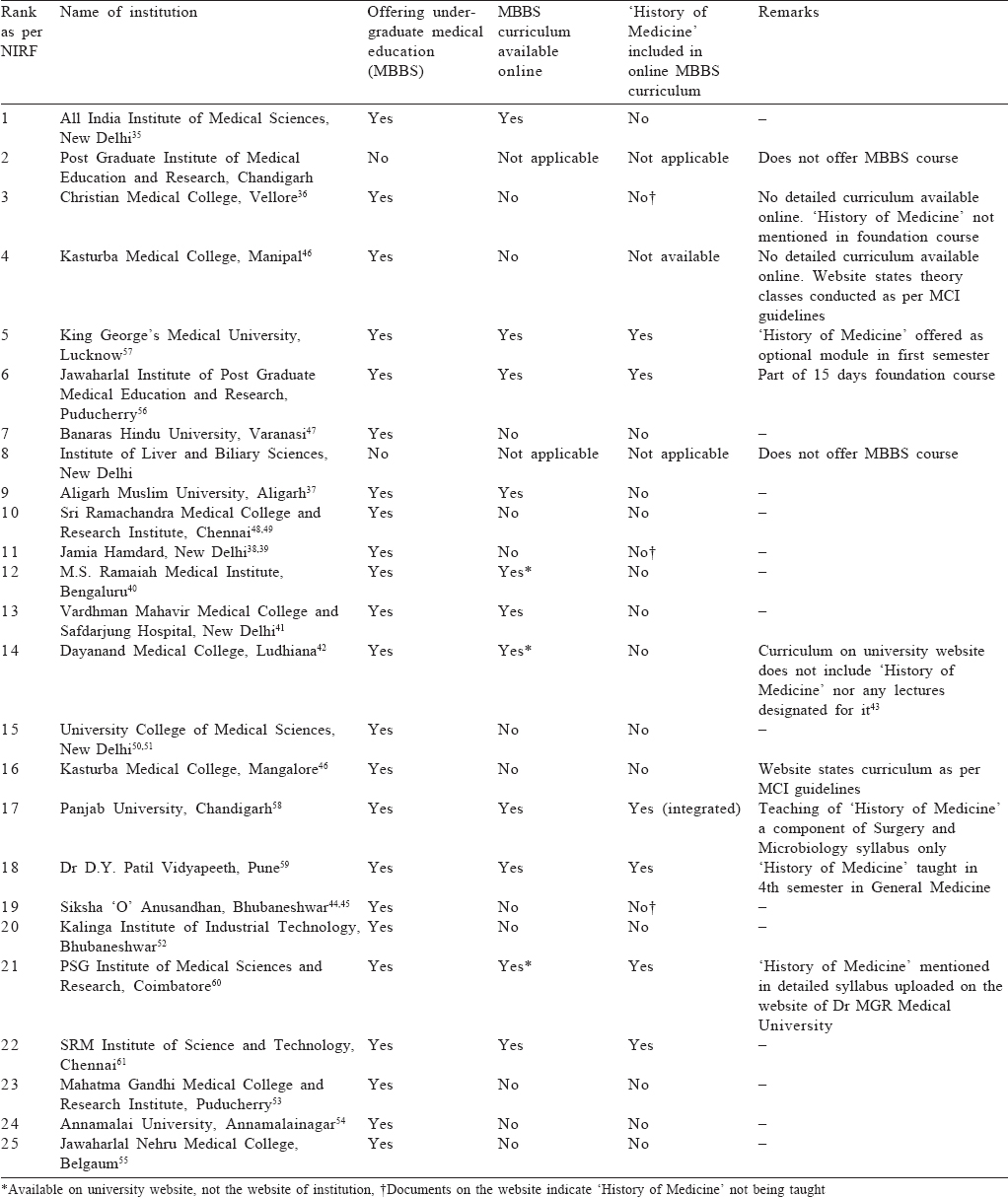 Hence, based on the website search of the top 23 premier undergraduate medical institutions in the country, a quarter of them have a dedicated programme for teaching ‘History of Medicine’. This is just a glimpse into the real picture of teaching ‘History of Medicine’ in India, as there are nearly 500 medical colleges recognized by the MCI, with a net annual intake of nearly 60 000 students in the undergraduate medical programme (MBBS).[62]

Medical knowledge should not be restricted to mere facts and figures. Introducing subjects such as ‘History of Medicine’ can make the curriculum more enjoyable and interesting. Although the MCI has mandated the teaching of ‘History of Medicine’ as a part of the undergraduate medical curriculum, this subject has taken a back seat in the priority of many medical institutions. Medical universities and institutions should proactively introduce this subject to undergraduate medical students. The course structure should ignite curiosity and sense of appreciation in the minds of students so that they can enjoy their rich heritage. Introduction of teaching ‘History of Medicine’ should be early and should continue with each subject specialty in an integrated manner, so that it does not become boring and overload the students. In addition, integrating it with each subject would provide context to the topic and make it appealing to the students.