Background. Cytoreductive surgery followed by hyper- thermic intraperitoneal chemotherapy (HIPEC) has shown better oncological outcomes in peritoneal surface malignancies (PSM). We assessed the feasibility and perioperative outcomes of this procedure in Indian patients.
Methods. In this prospective observational study from February 2013 to April 2015, we included 56 patients (41 females, 73.2%) with PSM. They had a good performance status, were either treatment-naïve or previously treated by surgery and systemic chemotherapy. They underwent cytoreductive surgery followed by HIPEC using a hyperthermia pump, with the temperature at 42 °C for 30-90 minutes. The chemotherapy regimen was based on the primary malignancy. Perioperative outcome data were collected and analysed. We also analysed the short-term oncological outcomes.
Results. Our patients included those with peritoneum confined ovarian carcinoma (32, 57.1%), colorectal carcinoma (9, 16.1%), pseudomyxoma peritonei (7, 12.5%), meso- thelioma (2, 3.6%), gastric carcinoma (2, 3.6%) and others (4, 7.1%). The median duration of surgery including HIPEC was 9 hours and the median hospital stay was 12 days. The median time for gastrointestinal recovery was 5 days. One-fifth of patients (11, 19.7%) required an extended stay in the inten- sive care unit. The most common grades 3 and 4 complications were hypocalcaemia 32.1%, hypokalaemia 32.1%, anaemia 21.4% and thrombocytopenia 7.1%. Major morbidity requiring surgical intervention occurred in 8.9% of patients. The 60-day operative mortality was 1.8%. At a median follow-up of 16 months, 7.1% developed peritoneal recurrence, 8.9% had systemic recurrence and 7.1% succumbed to the disease. Patients with platinum-resistant ovarian carcinomas had more peritoneal recurrence (3.6%).
Conclusion. In patients with PSM, surgical cytoreduction and HIPEC is feasible and potentially beneficial. It can be done with low mortality and acceptable morbidity. It requires a dedicated team of surgeons, anaesthetists and intensivists and proper infrastructure.

Peritoneal surface malignancies (PSM) occur by dissemination and implantation of tumour cells throughout the peritoneal cavity, often resulting in morbidity without systemic metastases. The peritoneal cavity is a common site for metastases of most intraperitoneal malignancies. In general, peritoneal metastases indicate advanced disease with a poor prognosis. Level I data regarding the effectiveness of systemic chemotherapy for PSM have not been published yet. [1] Inadequate drug delivery to solid tumours is a major cause for treatment failure. Hyperthermic intraperitoneal chemotherapy (HIPEC) combines the regional dose intensification of cytotoxic drugs by direct peritoneal administration with the direct cytotoxic effect of hyperthermia. Hyperthermia also enhances tissue penetration of the administered drug. [2] Thus, HIPEC may be an effective treatment option in PSM for local control and to prevent recurrence. We evaluated the feasibility and perioperative outcome of HIPEC in Indian patients with PSM.

We assessed the feasibility and perioperative outcomes of HIPEC in Indian patients with PSM. We also analysed the short-term oncological outcome of the HIPEC procedure. Fifty-six patients with PSM treated with cytoreductive surgery (CRS) and HIPEC at our institute were included in this prospective observational study done between February 2013 and April 2015. Written, voluntary, informed consent was obtained from all patients. The study was approved by the institutional ethics committee.

Patients with PSM, with no distant metastasis and Eastern Cooperative Oncology Group (ECOG) performance status <2 were included in the study. Those excluded were patients with extensive intestinal adhesions, a known allergy to intraperitoneally administered chemotherapeutic agents and with poor respiratory, hepatic, cardiac, kidney and bone marrow function (absolute neutrophil count <1500/cmm, platelet count <150 000/cmm and creatinine clearance <60 ml/minute according to the Cockfort formula).

Patients with PSM were staged with abdominal and chest imaging and underwent CRS. The intraoperative peritoneal carcinomatosis index (PCI) was assessed by the Sugarbaker method. [3] The completeness of cytoreduction (CC) was scored as follows and those with CC scores 0 and 1 underwent HIPEC:

A Belmont® hyperthermia pump (Belmont instrument company, USA) approved by the US Food and Drug Administration (FDA) was used for HIPEC. HIPEC was done by the semi-open or closed method with or without the bidirectional technique. The dose of the intraperitoneal chemotherapeutic agent was calculated according to the body surface area. Different drug regimens were used for different PSM. Cisplatin 100 mg/m 2 , mitomycin 20 mg/m 2 and doxorubicin 15 mg/m 2 in a low calcium peritoneal dialysis solution PD4 (dianeal 13.6 mg/ml, Baxter, Deerfield, IL, USA) was used for ovarian malignancies. For colorectal PSM, the bidirectional method was used with leucovorin 20 mg/m 2 i.v. push followed by 5 fluorouracil 400 mg/m 2 in 500 ml of normal saline over 60 minutes and then oxaliplatin 300 mg/m 2 in electrolyte-free glucose (50 mg/ml) containing perfusate for 30 minutes. [5] Before starting the perfusion, the core body temperature was lowered to 35 °C with the help of the Hemotherm machine (Cincinnati Sub-Zero Products, Inc. Ohio, USA). In both semi-open and closed methods, perfusion was maintained for 90 minutes (in the bidirectional method for 30 minutes) at 42 °C. All patients were observed in the intensive care unit (ICU) for the first 24-48 hours.

Descriptive statistics including means and standard deviations for continuous data and frequencies and percentages for categorical data were calculated. The correlation of the variables with the outcome parameter was calculated by chi-square test for non-continuous variables and Student t test for continuous variables. Statistical significance was defined as a p value <0.05 with 95% confidence intervals. We used SPSS v16 software for the statistical analysis. 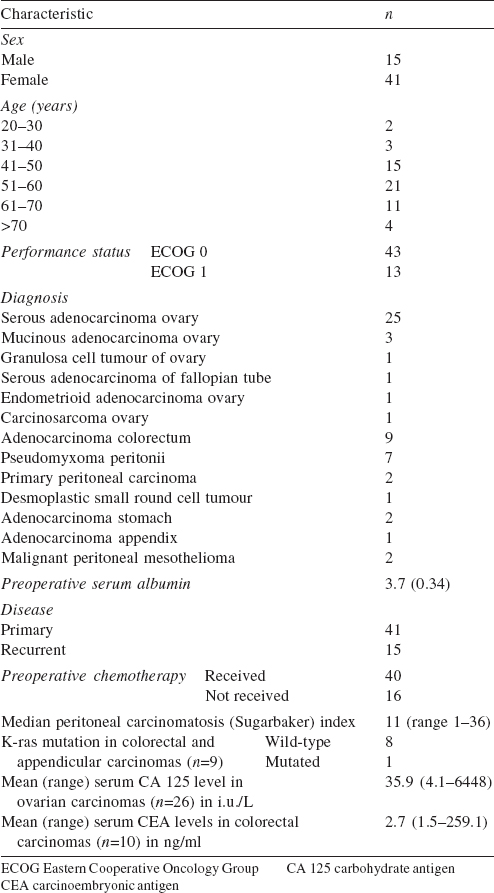 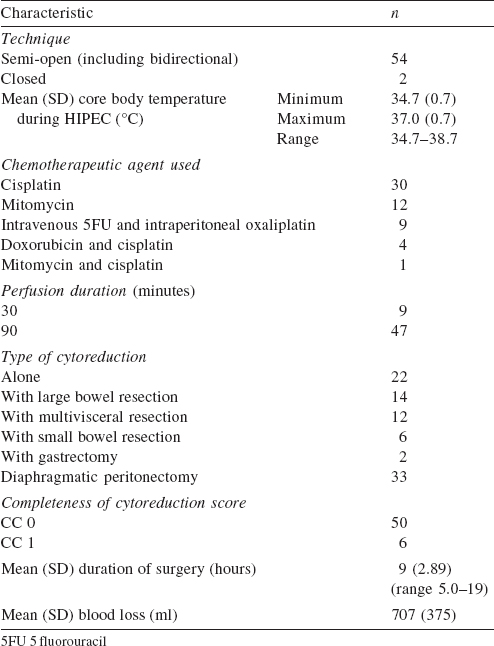 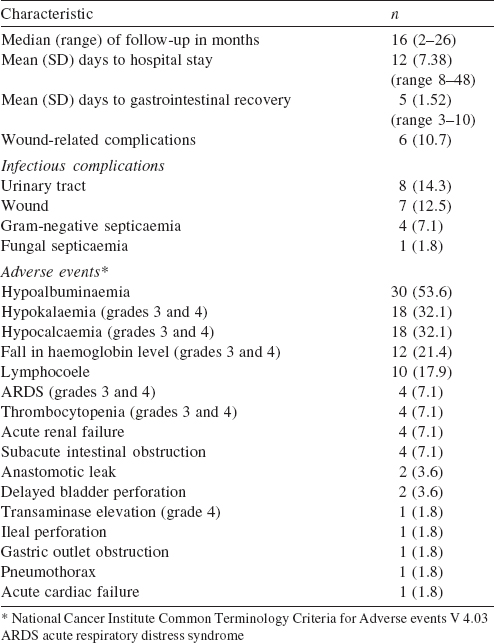 Among patients with ovarian carcinoma, 36 were FIGO stage IIIC (recurrent 30, 53.6% and primary 6, 10.7%) and 2 ( 3.6%) were primary stage IIIA ([Table - 4]). All colorectal patients (primary 7, 12.5% and recurrent 3, 5.4%) were stage IVB. Among 7 pseudomyxoma patients, 4 patients ( 7.1%) had disseminated peritoneal adenomucinosis (DPAM) and 3 had peritoneal mucinous carcinomatosis ( 5.4% PMCA). We included 5 platinum-resistant patients in our study. Thirty patients (interval and secondary CRS) received platinum-based chemotherapy prior to HIPEC.

The cytoreduction with multivisceral resection increased the duration of hospital stay (p<0.001), time for gastrointestinal recovery (p=0.017) and mortality (p<0.001). In our series, recurrent disease (p=0.018) and the closed method (p<0.001) were risk factors for adverse surgical outcomes.

The rationale for using CRS and HIPEC in various cancers is that the peritoneum is the most common site of recurrence (15%-40%). [7] Many drugs have well-established selection criteria such as PCI and CC score, and well-studied pharmacodynamics. Moreover, drug delivery to solid tumours is determined by the physiochemical properties of a drug or particle (molecular or particle size, diffusion and drug binding to major molecules) and biological properties of the tumour. Extravasation and interstitial transport (via diffusion and confection) are diminished by high interstitial pressure, hypovascularity, high tumour density, and/or large fraction of stroma. These problems are more serious in larger and bulky tumours. [8] Hence, a new modality of drug delivery is necessary to treat PSM. Research in the past two decades has improved the techniques and few randomized studies have shown a better outcome.

Our study included patients of all age groups with good performance status. Usually elderly patients are not included as it is considered that they will tolerate the procedure poorly. [9],[10] However, in our study 4 patients were >70 years of age and tolerated CRS and HIPEC as well as younger patients. This suggests that HIPEC is a feasible option even in elderly patients with careful selection and chronological age alone should not be considered for exclusion from CRS and HIPEC.

In the early phase of our learning curve, we encountered thermal injuries to the bowel resulting in bowel perforation. According to Stephens et al., [11] the closed method has a major risk of anastomotic leakage or digestive burns, close to the tip of the inflow drain, where constantly high temperatures are reached due to the inability to manipulate the bowel directly. This made us change our technique to the semi-open method, which we found safe and allowed us to control the high temperature better. Elias et al. [6] in a study of seven HIPEC procedures found that closed methods were not satisfactory and the open technique with traction of the skin upward was superior in terms of technical feasibility, thermal homogeneity and perfusate distribution. However, there is no evidence to establish the superiority of one method over the other with regard to patient outcomes, morbidity or safety for the surgical staff. [7],[12]

The cytotoxic effect of hyperthermia is not only temperature-dependent, but is also related to the time of exposure and its relation to other therapies. [5],[13] Till date there is no consensus about the ideal duration of perfusion. Our protocol was 30 minutes for oxaliplatin using the bidirectional method and 90 minutes for all other chemotherapeutic agents at 42 °C based on various phase II studies. [14],[15] Detroz et al.[16] stated that the anticancer action of heat increases with intraperitoneal temperature between 42-43 °C during HIPEC; this synergism decreases above 43 °C. [17] We used perfusate temperature of 42 °C, which our patients tolerated well with an acceptable change in core body temperature.

CRS followed by HIPEC is challenging with a long learning curve, [18] and the morbidity is not negligible. With reported rates of 27%-56%, [19],[20], [21] the French Registry data of 1290 patients treated at 25 centres shows that during the learning phase the postoperative mortality rate was 4% and grades 3 or 4 complications occurred in 34% of patients. [22] In our initial experience, we encountered biochemical adverse events more commonly. We found recurrent disease and the closed method to be risk factors for adverse surgical outcomes. The expectant management of adverse events with improved anaesthesia management, effective critical care, early start of total parenteral nutrition and postoperative rehabilitation improved our perioperative outcomes in the learning curve phase. Noticeably most patients had subacute intestinal obstruction and 4 patients required readmission. One patient had surgical re-exploration to relieve obstruction. We suggest plenty of oral liquids and decreased intake of roughage to reduce the rates of subacute intestinal obstruction.

Our reoperation rate was 9.8% for complications (bowel perforation, anastomotic leak and gastric outlet obstruction). In the literature, revision surgery was needed in 8.2%-14% of patients. [11],[23],[24] Recent data from the American College of Surgeons National Surgical Quality Improvement Program also showed a reoperation rate of 10% in the first 30 days. [25] The majority of our patients had advanced ovarian carcinoma in which there is a major impact of CRS. The median survival is 86 months after CRS, 46 months when residual tumour deposits are <1 cm and 37 months when they are >1 cm. [26] Given the high rate of recurrence after surgery (65%), HIPEC makes theoretical sense for the treatment of non-visible residual disease. The feasibility of HIPEC is established but neither the technique nor the timing (upfront, as consolidation, or at recurrence), nor the survival benefit is yet established. [27],[28] CRS followed by HIPEC have been used mainly to treat recurrent carcinoma , but there is heterogeneity in selection criteria and in techniques [29],[30],[31],[32],[33], [34] ([Table - 5]).

In the recent series of 246 patients treated for persistent or recurrent ovarian carcinoma, reported by Bakrin et al., [34] the overall median survival was 49 months, which is a good result considering that 25% of patients were platinum-resistant or had developed a recurrence within 6 months after treatment. Four (9.8%) patients had recurrence in the peritoneum on follow-up, of which 2 had platinum-resistant ovarian carcinoma, 1 primary peritoneal carcinoma and 1 desmoplastic small round cell tumour. Our study has a limitation of short median follow-up of 16 months with the longest follow-up being 26 months. Our good results could be due to mandatory preoperative oral protein supplementation with respiratory exercises, achieving good cytoreduction (CC 0 or CC 1, i.e. residual tumour <2.5 mm) and a dedicated team of a cytoreductive surgeon, anaesthetist, medical oncologist and intensivist. Long-term follow-up is required to analyse the oncological outcome. Worldwide, many trials are under way to evaluate the benefit of CRS and HIPEC in ovarian carcinoma. The ongoing trials are: for recurrent ovarian carcinoma CHIPOR (NCT 01376752), HORSE (NCT 01539785) MSKCC trial (NCT 01767675) and for primary ovarian carcinomas OVIHIPEC-1 (NCT 004262257), CHORINE (NCT01091636) and NCT01628380.

In Indian patients with PSM, CRS followed by HIPEC is feasible with acceptable morbidity and low mortality. The semi-open method of HIPEC is safer than the closed method. The use of mitomycin led to more wound-related complications while cisplatin caused electrolyte imbalance more often. The most common events of electrolyte imbalance and tachycardia require intensive care management. Subacute intestinal obstruction may be reduced with long-term liquid diet. Platinum-resistant ovarian carcinomas recurred more often. With increasing experience and good patient selection, morbidity associated with CRS and HIPEC can be reduced.

Conflict of interest: None to declare