The Hospital Cornea Retrieval Programme (HCRP) was started in 1990, to focus on hospital-based deaths and encourage eye donation using a combined method of motivation and grief counselling. It had several advantages such as ready availability of a detailed medical history, availability of tissues from younger donors, reduction of death to corneal retrieval time and cost- effectiveness. Health professionals, including attending doctors, residents, nursing staff and paramedics play a major role in HCRP in counselling and motivating the relatives of the deceased and potential donors. For the past 5 decades, the National Eye Bank, All India Institute of Medical Sciences (AIIMS), New Delhi, has been serving as a non-profitable centre and playing a leading role in policy-making, research, training and corneal transplantation activities. The HCRP has proved to be the backbone for procurement of human corneas at the National Eye Bank, New Delhi. As health professionals can counsel and motivate relatives of deceased patients in the hospital and play a key role in the HCRP for eye donation, we aimed to assess the knowledge and attitude towards eye donation among health professionals.

We did the study at a tertiary eye care centre in northern India during January to June 2012. The study was designed in accordance with the tenets of Helsinki, and after obtaining ethical clearance from the Institute Ethics Committee, the study was commenced. In this cross-sectional study a closed-ended questionnaire was administered to the eligible participants in their local language. Medical social workers were trained to administer the questionnaire to health professionals of the hospital and record responses appropriately. The study population including health professionals such as doctors, nursing staff, research staff and students, technicians and paramedical staff were interviewed. Pretesting and piloting of the administered questions were carried out on 50 healthcare professionals in the tertiary eye care centre.

The sociodemographic characteristics such as age, gender, religion, level of literacy, occupation, religion, type of family and marital status were noted. The responses to the questions regarding knowledge and attitude towards eye donation were noted verbatim in the questionnaire. Twelve questions focused on the areas related to knowledge about eye donation and five questions attempted to assess the attitude and willingness of the participants to pledge their eyes for donation. Depending on the response to the knowledge-based questions on awareness about eye donation, corneal transplantation and donor preservation, ‘knowledge’ was scored between 0 and 3 depending on the correct responses by the participants. Based on one, two or all three correct responses by the participants, knowledge was graded as ‘poor’, ‘good’ and ‘excellent’, respectively. The attitude towards pledging of eyes by health professionals was then evaluated, by assessing the readiness of the study participants to register their eyes for donation.

The data were tabulated and statistical analysis was done using SPSS 20th edition software. All the quantitative data were compared using the chi-square test; p<0.05 was considered statistically significant. 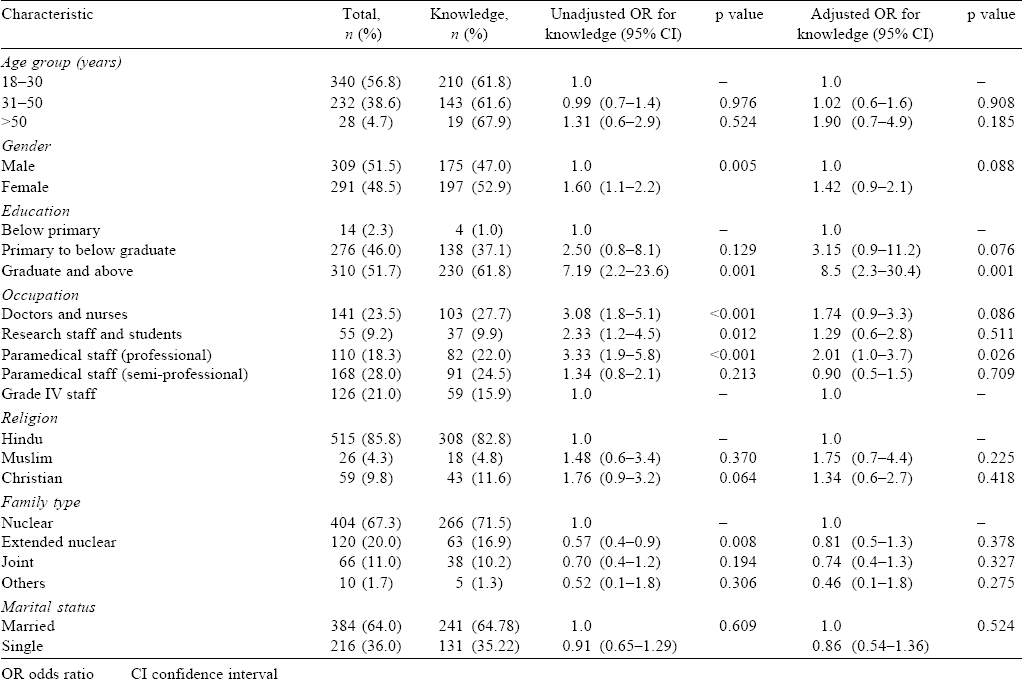 The attitude towards eye donation was assessed by asking the participants if they had pledged their eyes for donation. Only 36 (6%) health professionals had already pledged their eyes. The factors for not pledging were paucity of time (141 [25%]), personal reasons (266 [47.2%]) and other reasons (130 [23%]) like not giving a serious thought to the subject [Table - 4]. Enhancement of awareness about eye donation is essential, to keep pace with the high demand for corneal tissue in developing countries, where the burden of corneal blindness is the greatest.

Our study shows that there was sufficient knowledge about eye donation in over 50% of health professionals at our apex tertiary care centre. However, in terms of willingness, only 6% were ready to pledge their eyes. These results imply that although awareness campaigns among health professionals have been carried out, these have not made an impact on the frequency with which people pledge their eyes. Health professionals with the right knowledge and attitude towards eye donation can motivate their patients and relatives to pledge their eyes, which in turn can generate tremendous impact on the turnover of eyes through the HCRP. Similar studies have been done among medical students of New Delhi in 2002[2] and 2007[3] and showed increased awareness about eye donation from 79.6% to 99.4%, respectively. Studies by Eze et al. and Ogawa et al. reported deficits in knowledge and attitude about eye donation and corneal transplantation in non- medical undergraduates compared to medical undergraduates.[4],[5]

We found no significant association between knowledge of eye donation and age, gender, religion or marital status of the participants. Contrary to this, a study done in Singapore reported poor knowledge among youth regarding corneal donation and transplantation.[6]

Due to gradual stepping up of awareness programmes, improvement in knowledge is expected. Health professionals with lesser education level had poor awareness about the subject. Although well-educated professionals had sufficient knowledge about eye donation, it has not led to a change in their attitude towards pledging their eyes, which implies that the acquired knowledge failed to alter their attitude. Similarly, another study observed that willingness to pledge eyes was not influenced by prior knowledge of eye donation, literacy status and socioeconomic status. However, reasons such as dissuasion by distant relatives, legal problems, and religious beliefs were reported as major barriers for unwillingness.[7]

In our study, a maj or barrier for not pledging eyes was attributed to ‘no serious thought given to eye donation’. Considering these findings, there is a need to reinforce health professionals, especially doctors who certify deaths and allied nursing staff to be trained regularly in grief counselling and motivation. Gogate et al. have aptly described health professionals as the ‘catalyst’ who can facilitate eye donation and improve donor cornea retrieval rates.[8] A trained health professional can counsel relatives of the deceased during the first few crucial hours after death and can emphasize the triple benefits of eye donation in terms of potential vision for two blind people as well as a good deed in the name of the deceased.[3] A study in southern India studied awareness among stakeholders which included donors, their family, community, beneficiaries of corneal donation, surgeons, hospital staff, staff of eye banking facilities and the general population. They found higher awareness levels and willingness to donate eyes among stakeholders.[9]

Though the mass media remains an essential tool to spread awareness, it is still insufficient to improve harvesting from donors. Yadav et al. reported newspapers (34.3%) as the most common source of knowledge on eye donation, followed by television (33.5%), eye specialists (17%), doctors (11.3%) and health workers (3.8%).[10] Similarly, Sadana et al. showed that newspapers (64.8%) contributed as an important source of information about eye donation.[11]

A pivotal role is played by the ‘catalysts’ who facilitate the reaction. Perhaps, regular training, continuous medical education for doctors and nurses about eye donation and periodic campaigns can bring a change. We observed that knowledge about eye donation was acquired by doctors and nurses largely from institutions where they received their professional training, and hence inclusion of eye banking in the curriculum of teaching institutions can promote eye donation in the long run.

Ours was a large study comprising health professionals from an apex institute of the country. It provides us an insight for improving and strengthening the HCRP. However, these data cannot be generalized to other regions of the country. Though we expect that the overall knowledge and attitudes among health professionals in the rest of the country are unlikely to be very different. Hence, to increase the knowledge and awareness about eye donation, first, practising doctors and students who are or will be providers of education about eye donation should be educated. These are the people who can motivate relatives of patients for eye donation. Second, campaigns in the mass media to promote eye donation should be planned.

We acknowledge the contribution of medical social workers, health personnel and the programmer who played an important role in successful implementation of the study and analysis of the results.