Knowledge, attitude and behaviour of the general population towards organ donation: An Indian perspective

Background. The rate of organ donation in India is low and research on organ donation among the general population is limited. We assessed the knowledge, attitude and willingness to donate organs among the general population.
Methods. We carried out a cross-sectional descriptive study among 193 randomly selected relatives of patients (not of those seeking organ donation) attending the outpatient department at a tertiary care centre. We used a structured questionnaire to collect data through face-to-face interviews.
Results. We found that 52.8% of the participants had adequate knowledge and 67% had a positive attitude towards organ donation. While 181 (93.8%) participants were aware of and 147 (76.2%) supported organ donation, only 120 (62.2%) were willing to donate organs after death. Further, there were significant associations between age, gender, education, economic status and background of the participants with their intention to donate organs.
Conclusion. Our study advocates for public education programmes to increase awareness among the general population about the legislation related to organ donation.

Organ donation is defined as an act of giving one or more organs, without compensation, for transplantation to another person. [1] Although, organ donation is a personal issue, the process has medical, legal, ethical, organizational and social implications. [2], [3] Technological advances in the past few decades have enhanced the feasibility of organ transplantation, which has pushed the demand for organs. Consequently, shortage of organs has become a global concern. [4]

In India, the Transplantation of Human Organs Act (THOA) was enacted in 1994. [5] Yet the rate of organ donation in India is poor (0.34 per 100 000 population) compared to developed countries. [6] In addition, organ donation following brainstem death is infrequent in India. THOA (1994) defines brainstem death as ′the stage at which all functions of the brainstem have permanently and irreversibly ceased′. [7] Attitudes are generally influenced by social and cultural factors. [8] Knowledge, attitude and behaviour are the key factors that influence rates of organ donation. [9],[10],[11] Culture and religion have also been documented to affect the decision-making process of organ donation. [8] Hence, it is crucial to assess the knowledge and attitudes of the general population towards organ donation. In India, published evidence on organ donation is mainly from studies among healthcare workers, [12] patients [13] and college students. [14] However, some research is available about organ donation among the general [15] and rural populations. [16] We assessed the knowledge, attitudes and willingness to donate organs among the general population.

We carried out this cross-sectional descriptive survey among relatives of patients attending the outpatient department (OPD) at a tertiary care centre in Bengaluru. The study sample was selected by a lottery method based on the OPD registry. We included all individuals ≥18 years of age and those who were willing to participate. We excluded people with cognitive impairment and relatives of patients who were in need of organs for transplantation. We asked 275 people to participate in our study; of them, 82 (30%) declined due to lack of time and interest. Hence, our final sample had 193 people.

The questionnaire was in four parts. The first part consisted of items about sociodemographic details of the participants such as age, gender, education, religion, economic status, marital status and place of residence. In addition, five questions related to participants′ awareness about organ donation, brain death, legislation, opinion on promotion of organ donation and sources of information about organ donation.

The third part consisted of 22 items assessed on a 5-point Likert scale that ranged from ′strongly disagree′ to ′strongly agree′. These items assessed perceptions and attitudes of participants toward organ donation. [17] Points ranging from 1 to 5 were given to each response such that the more positive the response, the higher the score. The range of scores for this scale was 22 to 110.

The fourth part of the questionnaire measured participants′ willingness to donate organs. Intent to sign the card was measured on a 5-point scale developed by Skumanich and Kintsfather [18] (1: I will definitely sign the card; 2: I will probably sign the card; 3: I am unsure as to whether or not I will sign it; 4: I will probably not sign it; and 5: I will definitely not sign it). A sixth item was added to identify participants who had already signed an organ donation card. [19]

We piloted the questionnaire among a group (n=20) of participants and we found that the study was feasible. The primary author collected the data through a face-to-face interview, in a private room at the treatment facilities where the participants were recruited. It took approximately 45-50 minutes to complete the structured questionnaire.

Of the 193 people interviewed, 103 (53.4%) were men. The majority of participants were between 25 and 40 years (36.3%) with a mean (SD) age of 44.1 (1.55) years ([Table - 1]). The majority were married (85.5%), Hindus (60.1%) and from an urban background (56%). While most of them (93.8%) were aware of organ donation, only 5.7% had heard about the organ donation law ([Table - 2]). With regard to organ donation statistics, the majority of people were not aware about the demand of organs for transplants (100, 51.8%) and that people on the waiting list for transplant die every day because of non-availability of organs (130, 67.4%). Participants possessed better knowledge about the process of organ donation as the majority approved that organ and tissue donation does not disfigure the body, so an open casket funeral is possible (161, 83.4%) and said that selling organs is illegal in India (168, 87%). A majority of the participants were aware that people can specify on a donor card about the organs and tissues they wanted to donate (146, 75.6%), and donors can change their mind about organ donation after signing the donor card (137, 71%). More than half the participants (101, 52.3%) agreed that religious people do not oppose organ and tissue donation. However, the mean (SD) knowledge score (5.81 [1.84] ) showed that only 52.8% of participants had adequate knowledge about organ donation. Regarding experiential knowledge, more participants were familiar with people who were on dialysis (130, 67.4%) and had a corneal transplant (69, 35.8%). 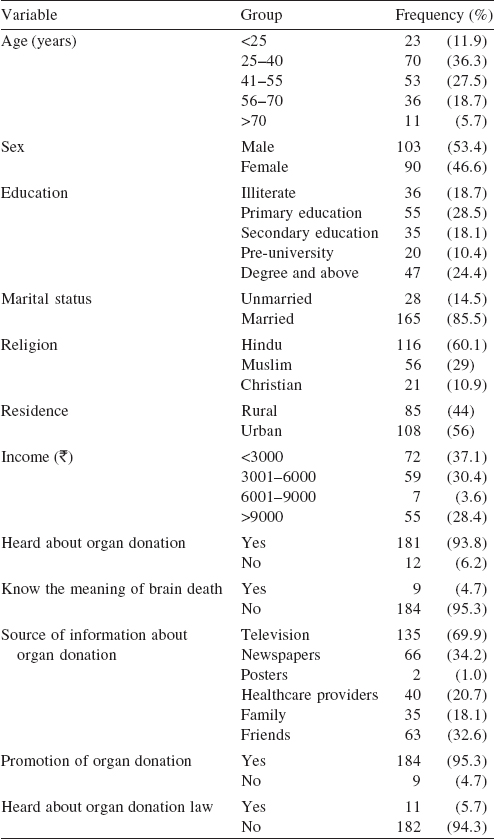 Table 1. Characteristics of the sample 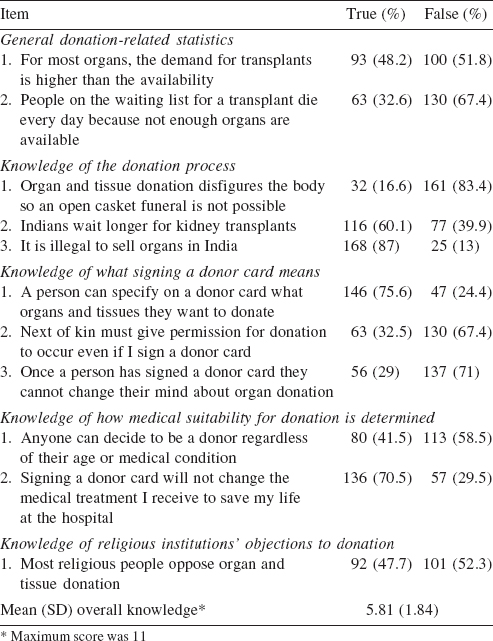 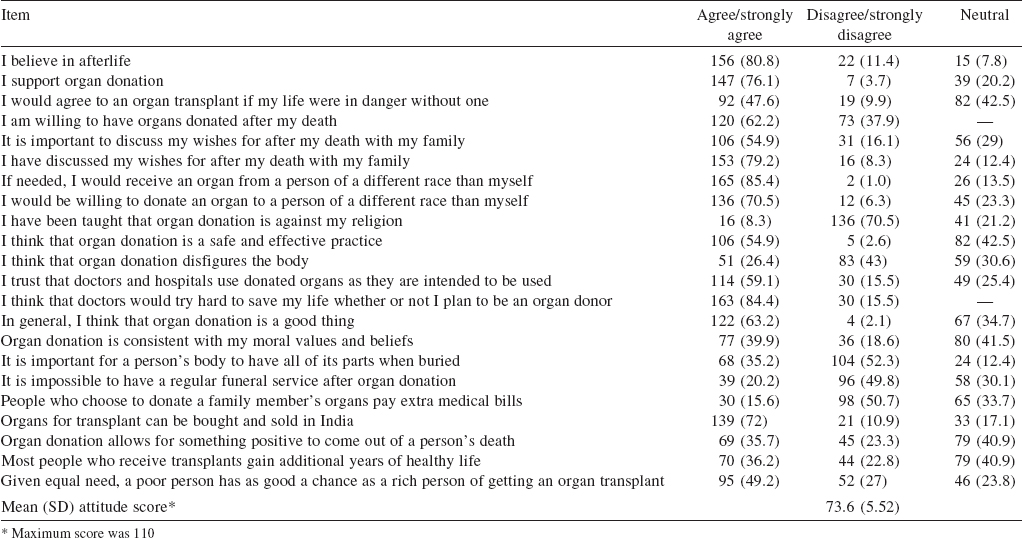 Table 4. Association between knowledge level and willingness to donate organs 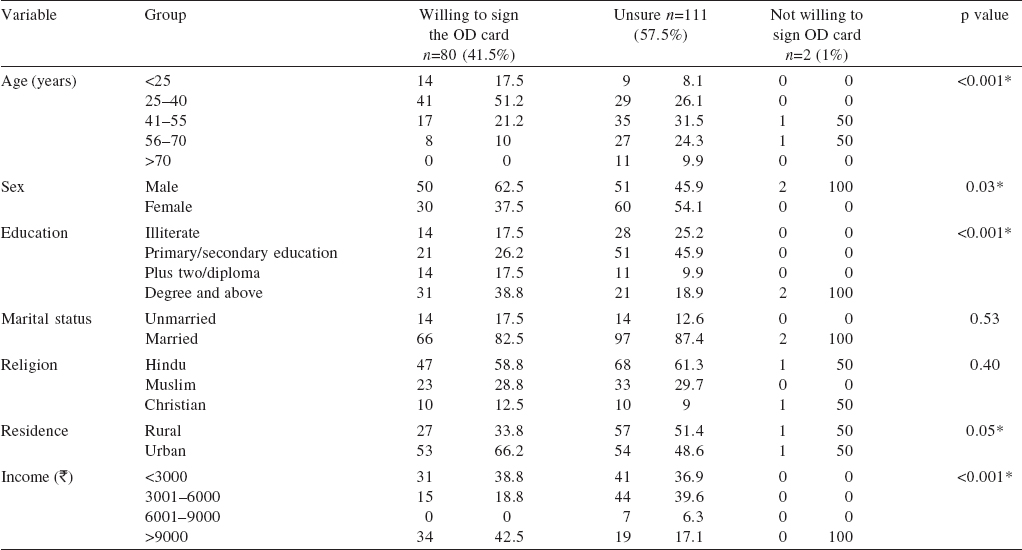 The majority (93.8%) of participants in our study were aware of organ donation and these findings are similar to those of previous studies. [13],[14],[16] In line with previous research, [14],[ [20],[21],[22],[23] we also found that television and newspapers were the major sources of information on organ donation. Similar to previous studies, [14],[24] in the current study merely 20.7% of the participants received information through healthcare providers such as doctors and nurses. Most importantly, only 4.7% of the individuals knew about the meaning of brain death. A recent retrospective case record analysis of over 5 years revealed that of 205 patients diagnosed to be brain dead, organs were donated only in 10 (5%) cases. [25] Hence, governmental and non-governmental agencies should take an active part in creating awareness about brain death among the general population. THOA was enacted in 1995, yet only 5.7% of the participants were aware about legislation related to organ donation. These findings were comparable to the studies which showed that 13.9% and 14.1% of participants were aware of legislation related to organ donation. [14],[23],[26] Nearly all (95.3%) the participants in our study were in favour of organ donation.

In our study, 52.8% of participants had adequate knowledge about organ donation. These findings were comparable to a previous study that showed 41.5% of participants had knowledge about organ donation. [27] The majority of participants in our study opined that organ donation does not disfigure the body so an open casket funeral is possible. Interestingly, this is different from earlier studies that found maintaining body integrity after death to be the most common reason for unwillingness to donate organs. [28] Similar to developed countries, [29] there is a shortage of organs in India, and many patients die while on the waiting list due to the shortage of organs. [14] In general, after signing the organ donation card it will be given to the donor [22] and in case the donor changes their mind about donating organs, they can tear up the organ donation card. [22] The majority (71%) of participants in our study believed that they cannot change their mind once they have signed the organ donation card. Hence, these issues need to be addressed when planning public education programmes. Nearly half the sample thought that various religions oppose organ and tissue donation. These findings were similar to the documented literature which showed that religious beliefs were the major barrier for organ donation. [22],[27],[30]

Evidence in the literature indicates that personal experience about organ donation contributes to the knowledge of individuals [31] and subsequently organ donation rates. Traditionally in India, the family takes care of its members even when they are sick. Hence, the consent of the next of kin is mandatory for organ donation from a deceased donor. [12] Further, 54.9% of participants felt that after their death it is important to know their family′s wishes. In a recent study, 83% of people thought that family/spouse should have the right to make a decision for organ donation. [14] Thus, a positive attitude towards organ donation is necessary among family members. [32] Nonetheless, a majority of them in our study were enthusiastic to either donate or receive organs. [33] Earlier studies indicate that trust in the medical system positively influences peoples′ attitude towards organ donation. [34] For example, fear of premature declaration of death and improper use of organs were the key reasons that hindered organ donation. [35] However, illegal organ donation and misuse of organs are the main reasons for the low rate of organ donation in India. [5] Similar to previous studies, 72% of individuals opined that organs for transplant can be bought and sold in India and this can be a major barrier to organ donation. [15] Similar to a recent study, [23] the majority of participants in our study had a positive attitude towards organ donation. Though 93.8% of participants were aware of and supported organ donation, only 62.2% of participants were willing to sign an organ donation card. Hence, there is an urgent need to identify factors that influence such an attitude. Governmental and non-governmental agencies should clarify issues related to signing organ donation cards. In line with previous research, [37],[38], our study also showed significant associations between age, gender, education, economic status, and background of the participants with intentions to donate the organs. We found that men (62.5%) were more willing to donate their organs than women (37.5%); these findings complement the documented literature. [14],[22],[37] Similar to our study, Azkan and Yilmaz found that those who are young and with higher education had more positive attitudes towards donating organs. [30] Similarly, participants with adequate knowledge were more willing to sign the organ donation card. [31],[38]

Our study has limitations of a cross-sectional design and a small sample that consisted of patient′s relatives. This makes it difficult to generalize the findings. Therefore, future studies should include larger samples and qualitative studies such as focus group discussions for an in-depth understanding of the issues. However, we studied a random sample with participants from various backgrounds, which is a strength of this study.

We suggest that the government should also strengthen the infrastructure of hospitals to maintain potential brainstem dead donors.

We thank all the participants for their valuable contribution.