The structure of Jan Swastha Sahyog (JSS) was explained in the first Letter from Ganiyari which dealt with malnutrition and tuberculosis; [1] a referral hospital with outreach centres and a structure of village health workers (VHWs) that serves about one million people in rural central India.

In public health terms, epilepsy is a poor cousin of tuberculosis: not just a non-communicable disease (NCD) but an NCD waiting its turn for any action behind cancer, hypertension, stroke and diabetes.

Convulsions are a dramatic and frightening affair for people without medical training and of course epilepsy is not the only cause of them. They can accompany innocent fevers in infants, afflict mothers with eclamptic pregnancies, complicate cerebral malaria and are often agonal in self-poisoning with organophosphates. In epilepsy the convulsions are unprovoked by such external causes and are recurrent and unheralded. Epilepsy is at least twice as common in places such as Ganiyari as it is in more affluent places.[2] But the paradox of epilepsy in Ganiyari (just as in vast swathes of the world) is that it mostly goes untreated, despite two-thirds of people with epilepsy becoming seizure-free on relatively cheap treatment. Not many other diseases (let alone neurological diseases) have a number needed-to-treat (NNT) of two for resolution of symptoms in one.

Just as it does everywhere else, epilepsy in Ganiyari exerts a profound effect on both the lives of people affected by it and their families, especially if it is untreated. Most importantly, it can end those lives unceremoniously-adults with epilepsy are 6 times more likely to die than those without it.[3] In India, with a population of 1.2 billion and a mortality rate for those between 15 and 59 years of 3.4/1000 population/year,[4] about 100 000 die each year from epilepsy. For comparison, this is more than those who died from Ebola fever last year in Africa. People with epilepsy die through accidents, drowning but perhaps most frighteningly from status epilepticus where the seizure does not stop. Otherwise disfiguring burns and other accidents are commonplace ([Figure - 1]). The stigma carried by epilepsy in many communities leads to social isolation for families often due to the belief that the condition is contagious. This is particularly devastating for children who are often excluded from schooling.

To understand why this should be, it is instructive to look at how things are arranged in the more affluent world. Here a variety of antiepileptic drugs (AEDs) are readily available but more important there is a framework for delivering and maintaining their use; this comprises community awareness that epilepsy is a medical condition (and not a visitation of evil spirits, for example), easy identification of epilepsy through extensive community medical systems, easy access to a doctor for diagnosis, management and review, education of people with epilepsy about their disease and the side-effects of their AEDs, and usually reliable availability of AEDs. At Ganiyari, although we can subsidize effective relatively low-priced drugs such as carbamazepine, sodium valproate and phenytoin, a support structure like this does not exist.

What help from outside is available for people with epilepsy in Ganiyari?

The WHO at its World Health Assembly meeting in March 2015 passed a resolution urging its member countries to develop programmes for epilepsy care.[5] This is encouraging but it may be many years before its effects are felt at Ganiyari. The previous Global Campaign Against Epilepsy,[6] run jointly by the WHO and the International League Against Epilepsy, never reached Ganiyari even though one of the pilot project studies in that campaign was from a tribal population similar to ours in Jharkand; [7] there was no mechanism for dissemination of its results.

A group of Indian neurologists writing on behalf of the Government of India [8] published a plan setting out a detailed structure for the delivery of comprehensive epilepsy care in the country. Unfortunately this plan is not workable in this part of rural India simply because there are not enough doctors to make it work. Epilepsy care is not on the radar of the state of Chhattisgarh as far as we know. Individual neurologists and epilepsy specialists, with a few notable exceptions, show little interest in untreated epilepsy, concentrating on treated but intractable epilepsy; despite the size of the problem, untreated epilepsy receives scant attention at epilepsy conferences in India. In part there are good reasons for this-untreated epilepsy carries little financial reward.

As no help is forthcoming from outside, epilepsy management at Ganiyari needs to be delivered from within its own scarce resources. But resources are there. We have patients with epilepsy, now on treatment and doing well who can spread the word in their villages and communities that epilepsy is a medical condition which can be greatly helped by medical treatment. We can arrange for these patient advocates to meet up with others in groups (see Box). 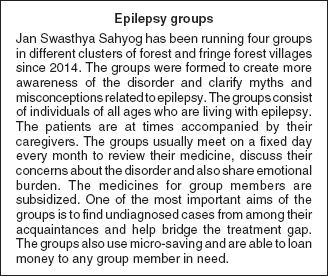 We can support these groups by educational visits from health workers, nurses and doctors. We can use these patient groups and our health worker network to identify other people in the community with epilepsy who might be helped. We can empower our senior health workers to diagnose epilepsy and start treatment for it before the patient gets to see a doctor in either the hospital or at an outreach clinic. We can use our doctors efficiently to provide necessary medical input knowing that other essential information about epilepsy will be provided by the health workers. Finally, we have a visiting epilepsy specialist, Dr Mamta Singh from the All India Institute of Medical Sciences in Delhi, whose visits not only provide some quality assurance for our system of care but also enable us to deal with the inevitable complex problems which can occur in epilepsy.

Does this community approach work? In 2011 before we started it we had a disappointing compliance rate of 40%; it is now >90%. By achieving a sisterhood of people sharing an illness, we are identifying and treating more people. Our health workers are trialling an ′App′ which facilitates diagnosis of epilepsy on a tablet (none of them had ever used one before) and they have identified another 46 people with epilepsy in their communities in the past year.

None of this is rocket science. But neither is it in any textbook. And it is relatively inexpensive.

So can it be replicated in other parts of India? JSS at Ganiyari is one non-governmental organization (NGO) but there are many other NGOs running healthcare systems in India who could replicate this if they chose. Private initiatives might also devise ways of doing this but only if their services were locally accessible and affordable for the patients. Governments both state and national could and probably should underwrite some of the cost. Providing carbamazepine and valproate free of cost and making them widely and consistently available would be a start. But devolving responsibility for much of the medical care of epilepsy to health workers (who need to be paid) as envisaged by the WHO will require a change of approach on the part of health planners and doctors. The results at Ganiyari suggest it is a change worth making.