Multicentric Castleman disease (MCD) is a rare clinical entity characterized by a polyclonal lymphoid proliferation, leading to generalized lymphadenopathy, organomegaly and systemic symptoms. It has been reported in association with either other monoclonal or polyclonal lymphoid disorders, such as POEMS syndrome and immunoglobulin (Ig)G4-related disease. We present a patient showing a variant of MCD, sharing common features with POEMS syndrome and associated with the proliferation of IgG4-producing plasma cells.

Castleman disease (CD) is an uncommon lymphoproliferative disorder.[1] It is historically classified as unicentric, when a single lymph node is involved, showing the classical ‘Castleman-like’ histopathological changes, or multicentric CD (MCD);[2] a subset of MCD is caused by human herpesvirus-8 (HHV-8), whereas HHV-8-negative MCD cases remain idiopathic.[3] Anecdotal cases of overlap with other lymphoproliferative conditions have been reported in the literature; in particular, MCD has been associated with immunoglobulin (Ig)G4-related disease (IgG4-RD), a broad collection of disorders, sharing common features: tumour-like swelling of involved organs with lymphoplasmacytic infiltrate enriched in IgG4-positive plasma cells and a variable degree of fibrosis.[4],[5],[6] Moreover, MCD has been related to POEMS, a syndrome characterized by polyneuropathy, organomegaly, endocrinopathy, monoclonal gammopathy and skin changes.[7]

We report a middle-aged male whose disease fulfilled the diagnostic criteria for MCD while sharing the clinical features of POEMS syndrome and IgG4-RD.

A 56-year-old male was admitted to the emergency room of a university hospital due to shortness of breath associated with anasarca. The patient complained of recent onset of bilateral lower limb pain, associated with dysaesthesia. No chest pain, fever, weight loss or pruritus was reported. His medical history was unremarkable, except for previous alcohol abuse (the patient reported complete abstinence in the past few months) and smoking (60 pack-years). 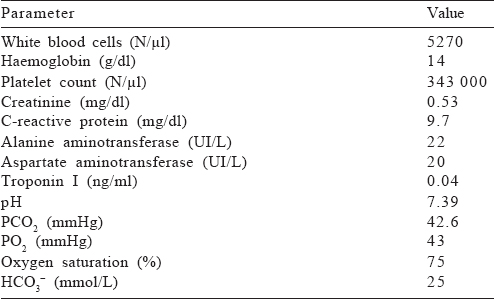 On clinical examination, skin hyperpigmentation and several confluent, pomphoid, non-itching skin lesions were present on the back and forearms; multiple, painless, lateral cervical and inguinal lymphadenopathy, hepatosplenomegaly and bilateral pleural effusion were noted. The patient was admitted to an internal medicine ward and underwent the following investigations:

The clinical scenario of the patient reported here can be summarized as follows: dilated cardiomyopathy, associated with organomegaly; generalized lymphadenopathy with a polyclonal B signature and skin and endocrine manifestations.

On this basis, and according to the histopathological findings, we made a diagnosis of MCD,[8] in its idiopathic variant, being the patient negative for HHV-8. Indeed, fever, night sweats, weight loss and fatigue are common in MCD. Physical examination is typically notable for generalized lymphadenopathy and hepatosplenomegaly, and many patients have evidence of fluid retention with lower extremity oedema, pleural and pericardial effusion and abdominal ascites. Anaemia, elevated inflammatory markers, hypergammaglobulinaemia and hypoalbuminaemia are often present.[9] Our patient shared many of these clinical features; recently, an international consensus provided new diagnostic criteria for idiopathic MCD. The retrospective application of these criteria to our patient confirms the diagnosis.[3] A key aspect of this case is the concomitant presence of heart failure, which might be explained by different potential causes. First, an alcoholic cardiomyopathy is a potential explanation, following the reported alcohol abuse. However, although rare, POEMS has been shown to be associated with heart failure. In a previous cohort of POEMS patients, 3 of 99 patients presented with heart failure and cardiomyopathy that resolved following the treatment of POEMS syndrome. Four other patients developed heart failure during an exacerbation of POEMS syndrome.[10] In our patient, EF improved after treatment from 29% to 37%, suggesting a potential aetiological component from POEMS syndrome.

Our patient has overlapping features of other monoclonal and polyclonal lymphoproliferative disorders, which suggest common pathophysiological mechanisms. While MCD is present in 15%–25% of patients with POEMS,[11] our patient has some features of POEMS (organomegaly; endocrinopathy, characterized by diabetes and adrenal insufficiency; and skin changes), although a proper diagnosis cannot be made because of the absence of monoclonal gammopathy, which is a mandatory criterion.[12] It is, therefore, reasonable to consider these manifestations as the result of proliferation of B cell lineage, either monoclonal or polyclonal, rather than the effect of specific disease mechanisms. Furthermore, the proliferating plasma cells lead to a considerable increase of IgG4 fraction, usually highly specific for IgG4-RD.[13] In our patient, the lymph nodes showed proliferation of IgG4-positive plasma cells, although no other typical clinical features of IgG4-RD were evident.

Based on the clinical diagnosis, the patient was started on a regimen of steroids, with administration of a four-dose rituximab treatment, along with supportive care for his cardiac failure. The choice of rituximab was made because of the B-driven origin of the patient’s condition. CD20 targeting is considered one of the strategies of choice in MCD, despite the lack of clinical trials directly assessing the efficacy of rituximab in this context.[14] Moreover, rituximab is an effective treatment in IgG4-RD.[15] Hence, we decided to use rituximab, which induced a considerable clinical improvement, allowing discharge of the patient who started an outpatient follow-up. However, 5 months later, he had sudden cardiac death.

This is a clinical case of overlapping lymphoproliferative disorders. Some of the clinical entities that we use to label our patients have relatively ill-defined borders. A diagnostic approach based on pathophysiology sometimes precludes categorization into neat classifications. Our case suggests that patients classified as having polyclonal lymphoproliferative disorders such as CD when the proliferating plasma cells produce this subtype IgG4 may present with clinical features of POEMS and/or IgG4-related disorders.