Padma Awards in the field of medicine: A shift in the right direction—from super-specialists to public health practitioners 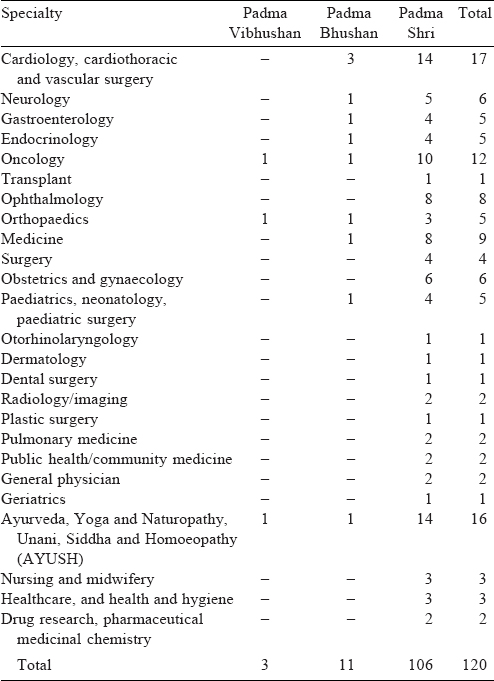 Table 1: Specialties of Padma awardees in medicine and related fields, 2011–18

In an earlier evaluation ofPadma Awards during 2000–10 by Arya et al., it was noticed that almost half the awards (68/137) were given to those working in super-specialties (cardiology, neurology, nephrology, urology, gastroenterology, etc.).[3] The general trend over the years has been such that clinicians have been preferred over the field of public health.[4] However, recent years have witnessed a change in the selection. People working in public health are being increasingly given these prestigious awards; this is particularly conspicuous in the announcements for 2018.[5] Drs Abhay and Rani Bang were awarded for their contribution to community-based child health approach in remote settings. Their immense contribution in bringing down the infant mortality rate in tribal-dominated Gadchiroli district of Maharashtra has been endorsed in India and globally. They are the only Indian medical researchers to have conducted and published three original research papers in reputed journals on three different health problems, each of which was a global first. The first was in 1989 on the high prevalence of gynaecological problems, the second a field trial on treating pneumonia in children in villages which successfully reduced pneumonia-related mortality in villages by 76% and the third, a novel home-based approach to newborn care (HBNC) by training ordinary village women called ‘Arogya Doot’ to decrease preventable neonatal and infant deaths.[6],[7],[8] The HBNC concept that has been adopted by the Government of India is based on the successful community-level interventions by Drs Bang. The Time magazine has honoured them as ‘Global heroes of health’. WHO and United Nations Children Fund too have endorsed their approach to treating newborn babies at home.[9]

Dr M.R. Rajagopal, an eminent physician in the field of palliative care, has been awarded the honour for revolutionizing community- based palliative care, particularly in Kerala. His advocacy has contributed to the amendment of the Narcotic Drugs and Psychotropic Substances Act of India in 2014—a critical step in reducing needless suffering and allowing millions to access pain-relief. He was also instrumental in the initiation of the National Programme for Palliative Care by the Ministry of Health and Family Welfare, Government of India.[10] He has authored many publications on the status and implementation of palliative care in India.[11],[12],[13]

Also, in the recent past, there has been increased recognition of those working in the public health field; Dr Madan Madhav Godbole (2017) for his work on mass implementation of the iodized salt programme and Dr Gulshan Rai Khatri (2013 ), public health specialist, for the successful implementation of tuberculosis control programme with improved outcomes.[17],[18] Dr Suniti Solomon (2012), microbiologist, was honoured posthumously for her immense contribution to HIV/AIDS research and prevention.[19],[20],[21],[22]

There has also been an increased recognition of traditional systems of medicine as is evident by the award of Padma Shri to Yeshi Dhonden, expert in Tibetan medicine ‘Sowa Rigpa’ and Lakshmikutty from Kerala, known as the grandmother of the jungle for her treatment of snake and insect bites using herbal medicines.[14],[15] Ms Sulagatti Narasamma was also awarded the honour for providing midwifery services in backward regions of Karnataka without any medical facilities.[16]

Apart from mainstream medicine, a noticeable aspect is that alternate systems of medicine, Ayurveda, Yoga and Naturopathy, Unani, Siddha and Homoeopathy have been given importance with 16 of 120 awards being given to those who work in these areas. These developments represent a shift in recognition of work beyond tertiary care institutes.

First, this is in alignment with the National Health Policy 2017 which reinforces the need for strengthening the public healthcare delivery system. Second, these awards have shown a rural trend, breaking the existing urban preponderance.

We believe this reward mechanism would encourage other public health practitioners and be a driving force to continue the good work. Given the enormous burden of public health problems that India is facing in the fields of maternal and child health, malnutrition, malaria, tuberculosis, neglected tropical diseases, non-communicable diseases, there is an ever-increasing need to recognize pioneers in this field.

Last, but not the least, these awards should be given on the basis of the impact that a person’s work has had on the population at large rather than an individual. By giving Padma Awards to ‘the unsung heroes of healthcare’, we recognize those who have major contributions to the betterment of health of a large number of people, often in unique ways.