Prevalence of risk factors for non-communicable diseases in a rural tribal population of Mokokchung, Nagaland, India

Background Non-communicable diseases (NCDs) are the leading cause of mortality in India. The northeastern part of India has a high burden of NCDs. However, data on the prevalence of risk factors for NCDs in the rural tribal population of Nagaland are limited. We estimated the prevalence and awareness level of risk factors for NCDs in the rural population of Mokokchung district, Nagaland.
Methods In a cross-sectional survey, we selected 472 subjects aged 25–64 years, stratified by age and sex, in 20 villages, using a cluster sampling technique. The WHO STEPS tools were used to collect data on behavioural risk factors, and anthropometric, blood pressure and capillary glucose measurements. The proportion of subjects with each NCD risk factor was determined overall and in various age and sex subgroups.
Results The 472 subjects had a median age of 44.5 years, 92 (19.5%) reported current smoking and 75 (15.9%) reported current alcohol use. Among 236 males, 90 (38.1 %) were current smokers and 65 (27.5%) were current alcohol users, whereas of the 236 females, only 2 (0.8%) and 10 (4.2%) were current smokers and current alcohol users, respectively. The use of smokeless tobacco was common among both males (139/236; 58.9%) and females (117/ 236; 49.6%). Inadequate intake of fruits and vegetables was reported by 189 (80.1%) males and 221 (93.6%) females. Insufficient physical activity was observed only among 16 (3.4%) participants. Prevalence of hypertension and a body mass index of 23.0–27.49 kg/m2 was 43.2% and 32.4%, respectively.
Conclusions We observed a high prevalence of behavioural risk factors for NCDs and of hypertension in rural tribal people in Nagaland. The primary healthcare system needs to be strengthened in this area to improve detection and management of hypertension. Mass and print media campaigns and provision of cessation services may also be helpful.

Chronic diseases and injuries were the leading causes of death and disability in India in 2011.[1] The common modifiable risk factors that lead to mortality from non-communicable diseases (NCDs) include high blood pressure, suboptimum blood glucose, low intake of fruits and vegetables, use of tobacco, high blood cholesterol, indoor smoke from solid fuels, physical inactivity, overweight and obesity, and use of alcohol.[1] WHO recommends the use of standard tools for surveillance of risk factors for NCDs to enable comparisons across populations.[2]

We did a cross-sectional survey in Mokokchung district, Nagaland. The study population included all those who were 25–64 years of age. As per the 2011 Census, 91.7% of the population in this district belonged to the scheduled tribes (mostly Ao tribe); further, it had an average literacy rate of 91.6% and 71.4% of the people lived in rural areas.[5]

Assuming a 57% prevalence of tobacco use in Nagaland (GATS 2010),[6] one would need a sample size of 118 to achieve 10% absolute precision for 95% confidence interval (CI), with a design effect of 1.25. We multiplied this calculated sample size by 4 to estimate the prevalence in four strata, i.e. males and females in 25–44 years and 45–64 years age group. Therefore, the calculated total sample size was 472.

We used a cluster sampling method to first select 20 villages (primary sampling units) among 108 villages using probability proportional to size linear systematic sampling (PPSLSS) from the list of villages in the district as per the 2011 Census. In each of the selected villages, a household was randomly selected as the starting point and individuals were surveyed in the contiguous households till the target number of eligible participants was reached. In each household, two individuals, one male and one female were surveyed.

Central obesity was defined as waist circumference of ≥90 cm in males and ≥80 cm in females.[8] Obesity and overweight were diagnosed on the basis of modified classification of body mass index (BMI) recommended for Asians.[9]

Proportion of persons with each risk factor and 95% CI were calculated using Epi Info 3.5.4 (from www.cdc.gov/epiinfo/support/downloads/prevversions.html). Prevalence of risk factors was compared across age (25–44 years and 45–64 years) and sex groups.

The study was approved by the National Institute of Epidemiology ethics committee and each participant gave an informed consent. Patients with newly detected hypertension/diabetes were referred to the closest district hospital for further management. 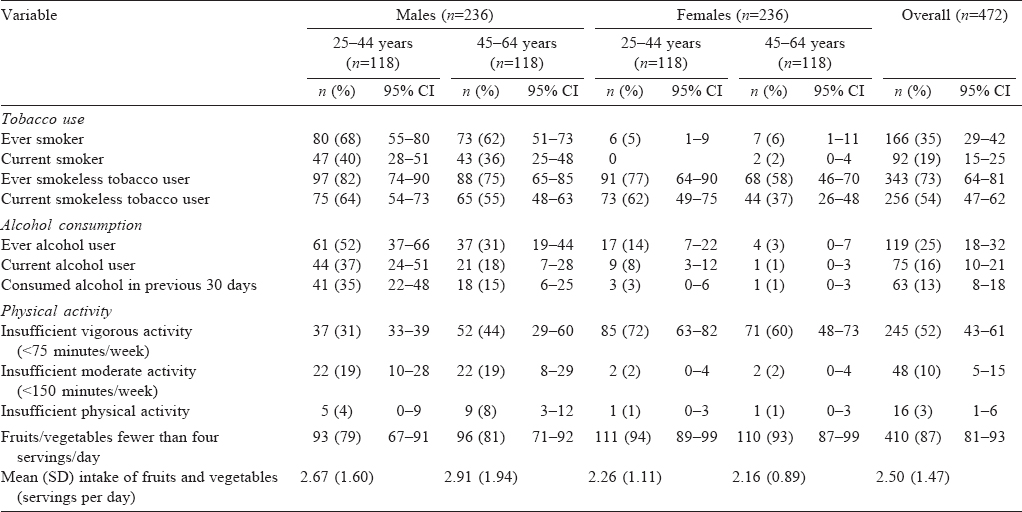 Consumption of fruits and vegetables. The majority of the population (410 [86.9%]) consumed fewer than four servings of fruits and vegetables per day. The frequency of consumption of these items was higher among women than among men [Table - 1]. The most commonly used cooking oil was mustard oil (385 [81.6%]), followed by sunflower oil (24 [5.1%]).

We found tobacco use and alcohol consumption as frequent risk factors for NCDs among rural tribal adults in Mokokchung district of Nagaland. This is consistent with results of previous surveys.[6],[11]

The National Tobacco Control Programme (NTCP) has been launched in Nagaland, but has not yet been implemented in Mokokchung.[12] There is a need to intensify the tobacco control efforts in the state, in particular in rural tribal areas, to prevent young people starting to smoking and to help current smokers quit smoking.

Alcohol consumption was also frequent among those in the younger age group. Nagaland has alcohol prohibition under the Nagaland Liquor Total Prohibition (NLTP) Act, 1989.[13] Consumption of Indian-made foreign liquor (IMFL) by a large proportion of the subjects indicates poor implementation of this Act. Illegal smuggling of liquor into the state due to porous borders with the neighbouring states may also be a contributory factor. Our data emphasize the need to implement various alcohol-containment measures, including those laid down in the ‘Nagaland State Drug Abuse Prevention and Treatment Policy’.[14]

We also observed a high prevalence of inadequate intake of fruits and vegetables. Growing of these crops in Nagaland is confined mainly to small backyard gardens. Failure to grow these as commercial crops has led to poor availability of fruits and vegetables in the state.[15] Another reason for low consumption of these foods may be the sociocultural preference for eating rice and meat.

Insufficient physical activity in our study population was lower than the national estimates.[16] However, the prevalence of overweight was higher than that in the 2005–06 survey (5.7% males and 6.4% females),[17] which is disconcerting. We believe there is a need to understand the factors underlying the increase in the number of overweight people, in the context of active lifestyles followed by this rural tribal population.

A report from Nagaland in 2010, based on diagnoses indicated in death certificates, found that a high proportion (20%) of deaths in the state were related to cardiovascular diseases.[19] This, combined with a high prevalence of risk factors for NCDs, suggests the need for preventive measures aimed at these risk factors in the district. This may include mass media campaigns and community-based interventions to increase awareness regarding healthy eating habits, weight reduction and tobacco cessation. In addition, there is a need to strengthen primary healthcare facilities for counselling and management of hypertension, using low-cost medications, and training of paramedical and medical healthcare providers. Policy interventions to increase production and improve access to fruits and vegetable should also be helpful.

We thank the Government of Nagaland and Chief Medical Officer, Mokokchung, Nagaland for their support during the conduct of the study. We thank field investigators who did data collection and participants of the study for sparing their valuable time and resources towards completion of the survey. This study was funded by the National Institute of Epidemiology, Chennai, Tamil Nadu.