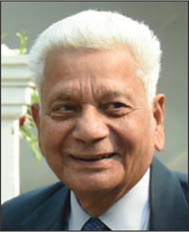 After a long (1972–1990) stint at the Postgraduate Institute of Medical Education and Research (PGIMER), Chandigarh, SPK, as we all call him with respect and affection, moved to the Sanjay Gandhi Post Graduate Institute of Medical Sciences (SGPGIMS), Lucknow where, after some groundwork which had already been done by my colleague Dr Rajan Saxena and myself over the previous two years, SPK conceived, planned, designed and built an ‘edifice’ in the shape of the Department of Surgical Gastroenterology (DoSGE). This edifice was the pioneer of its kind—SGPGIMS was the first institution in the country to offer MCh training in SGE at the national level. The edifice is large, boasting at one time of 10 faculty members (including 5 professors), 6 operating rooms which can run 5 days a week, more than 100 beds and a capacity of training 30 MCh students. The edifice is beautiful as it is usually the first or the second choice of the National Eligibility cum Entrance Test Super Specialty (NEET SS) aspirants in SGE. The edifice is attractive as anyone and everyone in SGE wishes to be invited as a faculty of the SGE week, an annual continuing medical education (CME) activity of the Department at SGPGIMS which was SPK’s brainchild. The edifice has become famous—known not only all over the country but also in several parts of the world, because of its publications which are based primarily on the departmental databases (especially of gallbladder cancer, bile duct injury, biliary stricture and pancreatoduodenectomy) which SPK insisted that they were not only complete but also correct (no falsification, no multiplication and no exaggeration). Unlike many large, beautiful, attractive and famous buildings, this edifice is useful and productive—its product, the alumni of DoSGE SGPGIMS, are occupying senior positions in almost all major teaching and many corporate hospitals in the country and some even abroad. SPK always considered the DoSGE at SGPGIMS a ‘feather in his cap’; even after leaving SGPGIMS, he always took immense and obvious pride in the achievements of the department and its alumni.

Always impeccably dressed and with a charming (some say a lady killer) smile on his face, SPK had a debonair and suave persona. Not only easily approachable, he was cordial with everyone. With a kind-hearted, compassionate and caring attitude and always wanting to help, he was a father-figure for all his students. He did have a difference of views with his counterpart Late Professsor Subhash R. Naik, the Head of the Department of Gastroenterology at SGPGIMS, mainly about whether surgeons should be doing endoscopies, but the two had excellent personal and family relations. He occupied the position of the Head of the Department in an upcoming institution with powers to order and purchase equipment but did not face a single charge of personal corruption; a rare feat these days.

A mole or a scar on a face is not necessarily a blemish; it may actually be a beauty spot. Some traits of a person which are seen by some as negative attributes may actually be positive. SPK was not a strict administrator; he never harmed or punished, not even shouted at or got angry with anyone. He was always cool; never irritated or losing his temper even at his adversaries which, in any case, were few. This was sometimes considered by some people as his weakness and taken undue advantage of. He had great faith in the honesty and integrity of people. He would often sign blank papers and forms presented to him by his subordinates believing that they will write or fill what is required and is correct. He was once hoodwinked by a subordinate who filled an exorbitant amount resulting in financial loss to the institution for which he (SPK) had to even face an inquiry. When I came to know about this episode, I asked him not to sign such blank papers anymore; ‘I cannot punish 99 honest people just because one person is dishonest,’ he said and continued to do so. I do not remember having seen him sad, sulking or depressed; in fact, he was jovial and had a great sense of humour. He was fond of telling jokes. He was once invited as a faculty member to the Annual Congress of the Japan Surgical Society (JSS). ‘A resident was assigned to look after me throughout my stay. The poor fellow will accompany me everywhere; I was worried he may follow me in the loo also!’ he quipped while praising the hospitality of the Japanese surgeons on his return from the visit.

SPK was not a dominating personality but his genes are dominant; they were obviously passed on to his first-generation students (those who trained under him) but are present in his second-generation students, i.e. the students of his students also. When I appealed to the SGE alumni of SGPGIMS to institute a scholarship under the auspices of the Global Medical Gurukul (GMG), the society formed by seven faculty members of SGPGIMS which also manages the online education portal Prashna India (http://prashna-india.weebly.com/), to honour SPK, contributions, some fairly large in amount, started pouring in immediately—not only from his primary students but also from his secondary students. He was visibly (on WhatsApp) happy and grateful when, just 2 weeks before he was to leave us, I sent him the details of four meritorious and needy MBBS students studying at government medical colleges who were identified for and awarded the GMG-SPK Scholarship (http://prashna-india.weebly.com/scholarships.html).

SPK was born as Satyendra on 18 April 1939 at Mawana, Meerut in western UP as the youngest child of an 8-sibling-family to Mrs Premwati and Mr J.P. Kaushik. He obtained MBBS from Lucknow University in 1961. He married his colleague Soma on 12 August 1962. He then went to the UK and obtained the Fellowship of the Royal College of Surgeons at Edinburgh in 1967. After his return to India in 1968, he joined the Jawaharlal Institute of Postgraduate Medical Education and Research, Pondicherry (now Puducherry) and then moved to PGIMER, Chandigarh. He was a family man—giving time to his wife and children. He would always find time for golf, bridge and gossip with his friends (and students when he went for conferences). He is survived by his wife Professor Soma Kaushik (formerly Head of the Department of Anesthesiology at SGPGIMS); his sons Amit and Robin (Professor of Surgery at Government Medical College Chandigarh) and his ‘adopted’ son TD Yadav (Professor of Surgical Gastroenterology at PGIMER, Chandigarh), an alumnus of DoSGE SGPGIMS.

Many in medicine and surgery do much, grow tall and achieve a lot but there are few who let others working under them, grow and achieve (I am one of the many beneficiaries of his largesse)—SPK was one of such rare breeds. Not only on his students, SPK has left an indelible mark of his personality and style on his young faculty colleagues at SGPGIMS (including S.S. Sikora, Ashok Kumar I, Anu Behari and myself).

On the fateful morning of 3 August 2021, both Robin and T.D. Yadav informed me that he has passed away; ‘You are wrong,’ I said, ‘he has NOT passed away, he has passed on his legacy to all of us to carry it forward and carry it we will.’ His associates (including myself) and his students, the alumni of DoSGE at SGPGIMS have decided to celebrate his life and achievements.

Record-keeping, data and audit were his obsession. All numbers had to tally; all i’s were to be dotted and all t’s must be crossed; if not, he will become impatient. After his demise, many people wished for his soul to rest in peace (RIP) but I am sure even ‘there’ he must be instructing Chitragupta to correct his records and conduct a proper audit of Covid deaths in India.

A teacher, a mentor, a true guru, a pioneer, a leader, SPK was indeed a ‘tall figure in a small frame’.