Scientific literacy and the medical student: A cross-sectional study

Background. Problem-solving, critical thinking, communication skills and the ability to interpret data are four core components of scientific literacy, which any student must acquire during the educational process. This is of specific relevance to the medical profession as doctors need to be ‘scientific’ in their approach. The nine domains of scientific literacy are further grouped under two major abilities: understanding methods of enquiry that lead to scientific knowledge and the ability to organize, analyse and interpret quantitative data and scientific information.
Methods. We included all first-year medical students within the first 2 months of admission in four medical colleges of India. We used the Test of Scientific Literacy Skills, a self- administered questionnaire, which is a validated and standardized tool for evaluating scientific literacy among students.
Results. A total of 525 medical students participated in our study over 3 years—335 were males and the majority of students (73.5%) had joined medical college from schools affiliated with the Central Board of School Education system. The presence of scientific literacy skills across the study sample was low.
Conclusion. The relative lack of scientific literacy uncovered by our study needs to be addressed by medical colleges, using innovative student-centred approaches and incorporating social media literacy. Reforms are urgently required in the school education system, which serves as a feeder to the medical education system.

The ability to identify contentious issues, to ask discerning questions, to have a deeper understanding of our surroundings and to have the ability to make evidence-based conclusions with an appropriate application of the current knowledge can be considered to be the primary expressions of scientific temperament. Indeed, all these must be a part of the repertoire of a modern doctor's skill set, apart from a thorough knowledge of medicine. A recent news story, which appeared after the results of the Central Board of School Education (CBSE) class XII examinations were declared in May 2019, had people discussing whether high scores equal better knowledge.[1]

Scientific literacy is the ability to creatively utilize appropriate evidence-based scientific knowledge and skills, particularly with relevance for everyday life and a career, in solving personally challenging yet meaningful scientific problems as well as making responsible socio-scientific decisions.[2] Another aspect to this issue of scientific literacy is that if people can have a broader understanding of their environment and their body, and make sense of the onslaught of conflicting information they receive daily through the all-pervasive influence of social media, they will have a different perspective on health and their environment and related issues.[3] Problem-solving, critical thinking, oral and written communication and the ability to interpret data are four core components of scientific literacy, which a student must acquire during the educational process.[4] A basic education in science at the school level is imparted essentially to prepare scholars to obtain further education in various disciplines of science and to provide them with a background required for entering technology-driven or science-based occupations or professions. A broader view could be that of creating an enlightened citizenry.[5]

Medical education in India is evolving, and the new competency-based curriculum for medical colleges[6] needs to be evaluated in the future, on whether it has addressed critical gaps in scientific literacy, such as those identified by our study.

We carried out this study on a sample of four medical colleges across the country. Institutional ethical clearance was obtained. All first-year medical students within the first 2 months of admission to their medical college were included. Students with any self-reported psychiatric or mental health issues were excluded from the study. Informed consent was obtained. A validated Test of Scientific Literacy Skills (TOSLS) questionnaire[7] was self-administered in a defined time-frame, with the investigators being available for clarification of the questions. This questionnaire has multiple choice-questions with the maximum scientific literacy score (SLS) being 28. This score comprises and represents nine skills and domains of scientific literacy. The nine domains have been further grouped under two major abilities: understanding methods of enquiry that lead to scientific knowledge and the ability to organize, analyse and interpret quantitative data and scientific information.

The information obtained from the study was tabulated into an Excel sheet and analysed using SPSS ver 22.0 and R Studio software. Appropriate statistical testing was done, with the one-sample binomial testing being preferred due to the data being mostly ordinal. 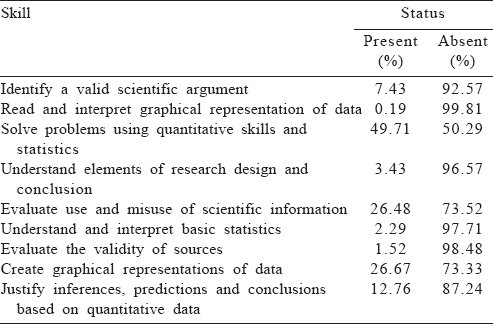 On statistical analysis, no effect of age was found on scientific literacy and associated scientific literacy scores, with all students being in the age range of 18–23 years. There was no significant association of any of the demographic factors with the scientific literacy scores. For analysis, combined groups were created for age, gender, aggregate percentage of marks obtained in class XII examinations, special achievements in school and most liked school individuals. Subsequently, a sample binomial test (α=0.05) was conducted for each of the nine skills where the assumed or targeted percentage of presence of each skill was 50%. The various skills were not found to have any statistically significant associations with any of the background information obtained from the students. Most of the skills had a low percentage of presence in the overall sample, which affected the statistical analysis for the association.

Society expects from its medical practitioners, the ability to appropriately use scientific evidence, to be able to identify bias, to ascertain credibility and reliability of sources of information. These qualities are of utmost importance in the modern era of easily accessible information ranging from suspicious to spurious content of unknown provenance. Social media and its tools have transformed communication and are rapidly transforming healthcare. With increase in the use of social media in clinical care, we need to be aware of its implications on the medical profession.[8]

While statistics is a bugbear for many in the medical profession, the average doctor needs to understand the principles of research methodology to be able to make informed decisions based on available information. Scientific literacy skills are ideally required to be fostered among students by the completion of their school education to make them better learners, citizens and doctors.

Medical colleges in India usually attract the relatively higher percentile of aspirational students having finished 12 years of school education, and having been educated in science at the school level. Hence, it was expected that this group of students would have a reasonably high level of scientific literacy as obtained from the administration of the TOSLS test. However, as [Table - 2] and [Table - 3] show, the low level of scientific literacy skills among our student population is a cause for concern, which needs to be addressed by not only medical education planners, but also the boards for school education. The general awareness of even medical postgraduates towards not only scientific issues but also important current social and environmental issues has often been found wanting,[9],[10] which indicates the need to re-align and not just tweak our medical education system.

In our study, students who were educated in the CBSE system had a relatively higher score of SLS compared to other systems of school education. While the numbers are too few to lend to statistical comparison, they highlight the need for our apex education regulatory authorities to undertake much-needed reforms. The school system serves as a feeder for the higher education system, and hence as a stakeholder, the Medical Council of India or its successor medical education regulatory agency must ensure measures for laying the foundation for scientific literacy at the school level.

If over the years, our students continue to have low scientific literacy skills, the outcome may be graduates who are not equipped with the skills they need to stay in synchrony with the rapid advances of science.[11] While awaiting educational reform at the school level, the medical education system needs to take cognizance of this relative lack of scientific literacy skills, and focus urgently on measures such as suitably designed research methodology capsules and also social media literacy initiatives targeted at the medical student community.