Background. Acute encephalitis syndrome (AES) is a clinical condition, of which the most common cause is Japanese encephalitis (JE). Though there is deficiency of data on AES and JE from Bihar, the state ranks third in the reporting of JE cases after Uttar Pradesh and Assam. We aimed to assess the status and trends of AES and JE cases in Bihar and to know the status of the disease in the districts.
Methods. We collected monthly epidemiological data for AES and JE for the period 2009–2014.
Results. A total of 4400 cases (733 cases/year) with an average case fatality rate (CFR) of 30% for AES for the entire study period. A total of 396 cases of JE were reported with approximately 14% CFR. The disease peaks were during the start and end of the Indian summer and monsoon months for AES and JE, respectively. Districts such as Patna, Jehanabad, Nawada, Gaya and East Champaran reported the maximum number of AES and JE cases with annual incidence rates of 4.7–25.0 and 0.546–1.78 per 100 000 population, respectively.
Conclusion. Since 2009, the incidence of AES and JE cases has been increasing in Bihar.

Acute encephalitis syndrome (AES) is a multifactorial clinical condition, the most common cause being Japanese encephalitis (JE). JE is a vector-borne viral disease caused by the JE virus of group B arbovirus (Flavivirus) and is transmitted to humans by the Culicine mosquito. JE affects the central nervous system (CNS), and can cause serious complications and death. The case fatality rate (CFR) is high and those who survive may suffer from neurological sequelae such as convulsions, episodic headache, autonomic disturbance, abnormal behaviour, mood disorder, intellectual deficit, paresis, incoordination of movements, jerky limb movements, speech disorder, cranial nerve palsy, gaze palsy, parkinsonian features, impaired hearing, etc.[1] An estimated 25% of affected children die from the disease, and among those who survive, 30%–40% suffer from physical and mental impairment. Children suffer the highest attack rate due to lack of cumulative immunity from natural infections.[2] JE was first recognized in Japan in 1924. Since the late 1960s, the extent of epidemics in Japan and China has steadily declined. It is estimated that 3 billion people are at risk, and the disease has spread to new territories.[3]

According to WHO, JE is endemic in large parts of the Asia and Pacific regions, especially in the South Asian and Western Pacific regions. According to WHO statistics, 3187 cases of JE were reported in 2013 from all over the world; of these, 42% were from countries in the South-East Asia region, and of these 80% were from India.[4] According to a systematic review by Campbell in 2011, India falls in the medium-to-high incidence areas with an expanding vaccination programme and shares its place with Sri Lanka, Thailand and Vietnam. The population of these endemic areas is about 538.1 million.[5] A fatality rate of 3 0%–50% has been attributed to JE in southern and eastern Asia.[6]

The first case of JE was reported in India in 1955 from Vellore, Tamil Nadu and the first major outbreak was reported in 1973 from Burdwan district of West Bengal. Since then, in India, AES and JE have been reported from 171 districts of 19 states. In India, the JE virus has been isolated from more than 15 species of mosquitos belonging to genera Culex, Aedes and Anopheles; Culex tritaeniorhynchus and Culex vishnui are considered the main vectors.[7] A major outbreak of JE was reported from eastern Uttar Pradesh (UP) during 2005 with more than 6000 cases and 1500 deaths. This led to the introduction of the JE vaccine in endemic areas. Bihar, which is adjacent to eastern UP, has also reported a rise in the number of patients with AES and JE with periodic epidemics in some districts, including Muzaffarpur district.[8]

The outbreaks of JE in Gorakhpur and Basti divisions in eastern UP during 2005, led to the development of surveillance guidelines for AES and JE by the National Vector Borne Disease Control Programme (NVBDCP). These guidelines required JE to be reported as an AES and after confirmation from the sentinel sites, a line-list of JE cases needed to be drawn and sent in prescribed formats.[9]

There is deficiency of data on AES and JE from Bihar. We aimed to ascertain the status and trends of AES and JE in Bihar to suggest measures for prevention and control.

The Bihar plain is divided into two unequal halves by the river Ganga which flows from west to east. With a population of 10.38 crore (103.8 million), 17% of the state population is in the 0–6 years age group. The literacy rate of Bihar is 63.8% and decadal growth is 25%. Bihar, consisting of 38 districts, is a complex state for healthcare services in terms of resources and accessibility.[10]

The NVBDCP follows the case definition of JE based on a syndromic approach. Epidemiological surveillance is done for AES, and suspected JE cases are reported as follows: ‘Clinically, a case of AES is defined as a person of any age, at any time of year with the acute onset of fever and a change in mental status (including symptoms such as confusion, disorientation, coma, or inability to talk) and/or new onset of seizures (excluding simple febrile seizures). Other early clinical findings may include an increase in irritability, somnolence or abnormal behaviour greater than that seen with usual febrile illness.’ Continuous surveillance of the disease is done through the Integrated Disease Surveillance Project (IDSP).[11] JE surveillance aims to identify patients with AES and subsequently confirm JE virus infection using IgM ELISA (enzyme-linked immunosorbent assay).[2] Laboratory confirmation of suspected cases of JE is done at identified sentinel laboratories, where the preferred test for diagnosis of JE is the IgM Capture ELISA. The samples are initially processed in district sentinel laboratories. Samples are then sent for confirmation to designated national laboratories.[12]

The cases are reported by health workers to district health authorities. In-charge nodal officers from the district regularly visit facilities reporting AES cases for validation of the reported data. At the state level, reports are received from the districts according to the status of the disease, i.e. daily reports during outbreaks, weekly reports during the transmission period and monthly reports in the inter-epidemic period. The districts are monitored for regular reporting. The data are then merged at the state level, collated and immediately transmitted through specified proformas.[12] We collected the monthly epidemiological data of AES and JE for the period 2009–2014. We accessed the data with permission from the state health authorities. 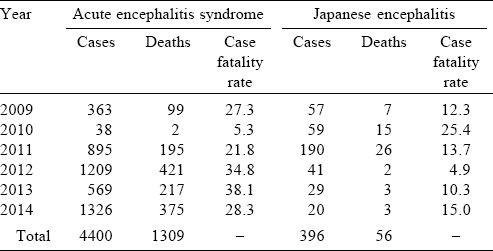 From 2009 to 2014, AES cases started to appear in April–May, reached a peak during June and declined from October [Figure - 1]. A similar pattern is seen each year. Two peaks are seen, one in June and another in September and October. The maximum number of cases and the highest peak was in 2014. The trend of JE (confirmed) cases over the years mirrored the trend in AES cases [Figure - 2].

The districts of Patna, Nalanda, Jehenabad, Nawada, Gaya, Aurangabad, Vaishali, Muzaffarpur, Sheohar and East Champaran had the highest annual incidence rate (4.7–25 per 100 000 population) for AES [Figure - 3]. District such as Saran, Siwan, Bhojpur, Buxar, West Champaran, Jamui and Sitamarhi had a lower annual incidence rate of 2.2 to 4.73 per 100 000 population and fall in the third quartile. Districts such as Kaimur, Darbhanga, Madhubani and others were in the first quartile and added little to the pool of AES cases.

The districts of Patna, Jehenabad, Nawada, Gaya, Lakhisarai, Gopalganj, Siwan, East Champaran and West Champaran have annual incidence rate of JE ranging from 0.546 to 1.78 per 100 000 population, which falls in the fourth quartile. Kaimur, Rohtas, Vaishali, Sheohar, Begusarai, Munger, Supaul, Araria, Purnia, Katihar and Kishanganj did not report any cases of JE. However, Aurangabad, Arwal, Bhojpur, Buxar, Saran, Nalanda, Khagaria and Banka were in the third quartile [Figure - 4].

The AES cases had a seasonal distribution—beginning in the months of April and May and peaking in June. The cases started to decline from October. A similar pattern was seen in confirmed cases of JE. Most previous studies too reported epidemics between May and October, and mostly from the northern and eastern parts of India.[17] In UP, the reported JE cases between 1998 and 2007 were sporadic in June and peaked in September before declining. Seasonal peaks of cases of JE have occurred during July to October, coinciding with the rainy and post-rainy seasons. The onset of winter brings a decline in the cases of JE.[10] In Nepal, cases of AES and JE started a little earlier, in April–May, and reached a peak during late August to early September, and then declined.[16] Saxena et al. studied the trend of AES cases and suggested that JE was increasing in northern India, which may result in larger epidemics in the future.[18] In India, Karnataka has been reported to have two epidemics each year, a severe form from April to July and a milder one from September to December along with the rest of India.[15] In Tamil Nadu, of 561 AES cases reported during a study, JE was confirmed in 4.9% with an increasing trend from 4.1% in 2007 to 5.3% in 2009.[19] The minimum reported incidence in a tropical setting for all ages was 6.34 per 100 000 population.[20] Districts of Patna, Nalanda, Jehenabad, Nawada, Gaya, Aurangabad, Vaishali, Muzaffarpur, Sheohar and East Champaran had the maximum number of cases of AES cases with an annual incidence ranging from 4.7 to 24.8 per 100 000 population. Dinesh et al.[21] and Mishra et al.[8],[22] have also reported a similar distribution of cases.

With all districts reporting cases of AES and JE, the disease is endemic in Bihar. The cases of AES start appearing in April and reach a peak in June and then decline. There is another peak of JE cases in October. The CFR of AES and JE ranges from 5% to 35% in Bihar. The annual incidence rate of AES ranges from 0.05 to 25 per 100 000 population with all districts reporting cases. Confirmed cases of JE have an annual incidence ranging from 0 to 2 per 100 000 population and 75% of the districts report cases of JE. The reporting and surveillance mechanism needs to be strengthened in all the districts of the state. Private practitioners who participate less in surveillance activities need to be encouraged to do so especially for cases of AES. Intense information, education and communication (IEC) activities must be started at the village level to increase participation from the community and to improve the long-term passive surveillance. Hence, there is a need to intensify efforts for prevention and control during April–June.

Conflicts of interest. None