V.Q.E: The Tale of an Indian Physician in the United Kingdom of the 1980's. 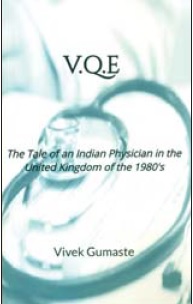 This intriguingly titled, slim volume is a slice from the life of Dr Vivek Gumaste, currently working as a gastroenterologist in the USA. It offers a glimpse into his journey from being a newly minted doctor in India to his final-chosen destination overseas.

This is an unusual book in that its title is an enigmatic acronym, which most doctors of the current generation may not be familiar with. In the 1980s, Indian physicians aspiring to work in the USA needed to pass the Visa Qualifying Examination (VQE), which has now been replaced by the United States Medical Licensing Examination (USMLE). To further compound matters, the Indian government did not allow the examination to be held in India. The only convenient centres for Indian doctors were Karachi, Manila and London. Travel being expensive and the result of the examination uncertain, Dr Gumaste decided to enter the UK medical system by doing the Professional and Linguistics Assessment Board (PLAB) examination, with his sights firmly set on eventually making it to the USA.

This set the stage for the next 2 years and 6 months of which this book is a recollection.

It is an unvarnished account of all that Dr Gumaste experienced during his time in the UK. What strikes the reader instantly is the remarkable honesty with which he has described this period in his life. There are no euphemisms and no attempt to whitewash any of the incidents that took place.

One needs to keep in mind that the author was only 26 years old when he came to England and, by his own admission, abhorred all things British. As going back to India without achieving his ambition was not an option and working long term in the UK was not acceptable, he was left with no choice but to take up a series of temporary locum jobs all over Britain.

His first test came when he had to pass the PLAB which, in addition to testing his medical knowledge, included a linguistic component involving a comprehension of various British accents. Fortunately, 3 weeks later, he was informed that he had passed! This set the stage for his career in the UK as a locum physician, working at temporary jobs sometimes as short as a weekend, moving from place to place in search of work with the added uncertainty that no work often meant nowhere to stay. We are also introduced to Dr Gumaste′s perplexing dislike for geriatrics and for rheumatology which he considered ′unglamorous′ and non- challenging.

Along the way, he met an entire ensemble cast of characters including a 90-year-old lady in her hospital bed screaming ′Blackie, Blackie! I don′t want to be treated by Blackies,′ There was a Sri

Lankan doctor who changed his name from Dr Marianyagam to Dr Marion to fit in with his British colleagues; Dr Tiruchirapalli Krishnamachari who resisted being renamed Dr Chris by his consultant and Dr Dutta, the Bengali consultant, married to a British lady, who wore a bow tie and left no stone unturned to act and sound British. His Indian origins asserted themselves at mealtimes when he generously shared his stock of green chillies with fellow diners.

There were many struggles in store for the author in England- the weather which was always cold, the food which he found too bland, the cubicle-like accommodation for young doctors, the long working hours and the barely suppressed racism including a terrifying encounter with skinheads on the London underground. Commenting on the English system of healthcare, Dr Gumaste highlights both the chaotic and haphazard career progression and the invisible glass ceiling which kept many overseas doctors in relatively junior positions.

The book also offers a glimpse into the major political events of the time including the Falklands war, Margaret Thatcher′s opposition to immigrants and Enoch Powell′s infamous speech exhorting the need for ′voluntary re-emigration′.

What shines through in this narrative is the author′s frankness and honesty in providing an unvarnished account of his time in the UK and his struggle to come to terms with his situation in every way. It offers a rare glimpse into the lives of Indian doctors when they moved overseas to greener pastures 40 years back.

It was Dr Gumaste′s sheer grit and single-mindedness of purpose to achieve his goal of getting to the USA that saw him through some difficult times. His story would serve as an inspiration even today to young physicians to dream and to follow their dreams.

Who should read this book? It would be primarily of interest to Indian doctors, especially those aspiring to go abroad. It would also attract older physicians who could reminisce about their time in the UK. Physicians in Britain would do well to look back at how the system of work and education in the National Health Service has evolved over time. For the sake of the lay reader, Dr Gumaste has given explanations of medical terms and procedures although this would be superfluous for the medical reader.

With 210 pages, the book is a handy and easy-to-carry memoir. The typeface is clear, and the material is chronologically arranged.

This book awaits a sequel chronicling Dr Gumaste′s initial experiences in the USA after he made it there. Maybe ′Life after VQE.′?