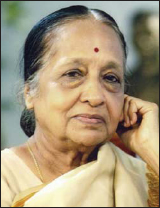 Mother of Oncology in India

Dr Viswanathan Shanta, Chairperson, Cancer Institute (WIA) was born on 11 March 1927 in a family which had two Nobel Laureates—Sir C.V. Raman (granduncle) and Dr S. Chandrasekar (uncle). She did her MBBS, DGO and MD from Madras Medical College (MMC) and joined the Cancer Institute in 1955 in response to a call from the Founder of the Institute, Dr S. Krishnamurthi. Dr Krishnamurthi, the visionary would be her mentor for the next 55 years, till his passing away in July 2010. Together they formed a fantastic team (his ideas and vision were executed to perfection by Dr Shanta) building the institute brick by brick, from a 12-bedded cottage hospital to a comprehensive cancer centre with over 550 beds dedicated to the treatment of cancer patients. Unlike other premier institutions, Cancer Institute (WIA) was a voluntary charitable cancer centre with more than 70% of patients treated free or at a subsidized cost. She was particularly efficient in fund raising for the institute. From 1955 till her passing away on 19 January 2021, she lived in a single room within the old campus.

In the early days, with hardly any medical staff to help, she donned the cap of a surgeon, nurse, theatre assistant and resident with consummate ease. Dr Krishnamurthi and Dr Shanta did the first Wertheim's surgery, and she did bedside duty for the patient, for days, till the patient stabilized. Often, she would spend the night taking care of sick patients and still be ready for the next day's rigour.

My first meeting with Dr Shanta was in the month of April 1985, soon after my MD results were announced. I met her seeking a job in the Medical Oncology Department, carrying a recommendation letter from Dr Suniti Solomon (who was the first to identify an HIV-infected patient in India), my mentor during my MMC days. Dr Shanta was busy in her outpatient but was kind enough to spare a few minutes to read the letter and inform me that they did not have a vacancy in the department but that I could apply the following year for a DM in Medical Oncology.

Once I joined the institute in March 1986 for my DM course, Dr Shanta was my mentor. She always appreciated an initiative that helped patient care and, at the same time, never minced words if one was found lacking in good patient care. After finishing my DM Medical Oncology in 1988, with both Dr Krishnamurthi and Dr Shanta's support, I received the Commonwealth Fellowship in 1991 to do my PhD in Molecular Oncology at the Imperial Clinical Research Facility (ICRF) Laboratory, Hammersmith Hospital, UK. With their support, I was able to establish the Department of Molecular Oncology after returning from the UK in 1994 and both were incredibly supportive in setting up a state-of-the-art department, which was later recognized by the Department of Science and Technology, Government of India, as a Centre of Excellence. Dr Shanta was always keen to know the new achievements in the department and she was delighted to hear that we had developed an assay for early detection of breast cancer and had applied for a patent.

The primary defining characteristics of Dr Shanta were her commitment to all patients, discipline, hard work and exemplary empathy and care. For her, clinical examination was paramount and fancy investigations were used to a bare minimum and only if absolutely necessary. Irrespective of what time it was, we were required as trainees to call her if a patient's condition deteriorated. Patient care was her mantra. She and Dr Krishnamurthi had drilled this and made sure that if there was any failing, the person was taken to task (including an enquiry when it was a serious issue). This is one of the reasons that the institute was world renowned where patients came first and were provided care irrespective of their social, religious and financial status.

Dr Shanta trained herself in Radiation Oncology and Medical Oncology in the days when there was no specialization or super-specialization in Oncology. She set up a separate Children's ward for the Paediatric Oncology Unit, the first of its kind in the country in 1960. She was also interested in Cancer Epidemiology and successfully completed the Chengalpattu cancer screening programme (1962–1964). Based on the results, she started the WHO Cancer Control Project at Kanchipuram in 1969, which unfortunately she could not continue since the funds were later provided to the Government Arignar Anna Hospital, Kanchipuram.

Among the several measures they introduced, Dr Krishnamurthi and Dr Shanta were able to get the Ministry of Railways to provide concessional travel for a cancer patient and one accompanying person. Later this concession was extended to bus and air travel. In the 1970s, Dr Shanta advocated for exemption of customs duty on anti-cancer life-saving drugs for poor patients. She convinced the Government of Tamil Nadu to allow morphine to be available freely through selected centres to the needy cancer patients and others with pain.

She and Dr Krishnamurthi introduced the super-specialty degrees in Medical (DM) and Surgical (MCh) Oncology, again a first in the country. The alumni from the institute are spread across the country in senior positions. She collaborated with the National Cancer Institute (NCI), Bethesda, USA to develop a protocol for the treatment of acute lymphoblastic leukaemia, to improve the cure rates in this potentially curable blood cancer. She started new facilities and newer departments to keep pace with rapid advances in the scientific world. She kept herself abreast of the developments in the field of oncology. For her, 24 hours a day was simply not enough.

Her untiring work to help cancer patients was recognized by over hundred awards including the Padma Shri in 1986, Padma Bhushan in 2006, Padma Vibhushan in 2016; the prestigious Magsaysay Award in 2004; DSc (Hon Causa), etc., which she dedicated to the institute.

She had a stroke in December 2007 but through sheer will, she overcame the paralysis; she had to stop operating but continued her OPD till the beginning of the Covid-19 pandemic, when the government staff asked her to stop seeing patients, to avoid risking herself. Although she was upset, she had to follow the government order. Till her last day she was concerned about her patients. On developing severe chest pain, she was transferred to a corporate hospital, where she passed away on 19 January 2021 early morning due to an iatrogenic cause. The nation lost one of its icon's and cancer patients and the institute staff lost their Mother. We pray her soul rests in peace.