Background. Many people with diabetes, who practise Islam, are passionate about fasting during Ramadan despite their medical condition and exemption from the religion. These patients are at risk of hypoglycaemia, hyperglycaemia, diabetic ketoacidosis, dehydration and thrombosis. We evaluated the acceptability of an individualized management plan for such people.
Methods. We conducted a survey to assess the knowledge and ability of patients to manage their diabetes while observing the fast during Ramadan. Then, the acceptance of an educational intervention was assessed among patients, which was provided 1 month before Ramadan. Patients were followed up at 2 weeks into and after Ramadan.
Results. Of the survey population, only 14.7% of patients volunteered for pre-Ramadan assessment and 97.5% of patients recollected suffering from symptoms suggestive or hypoglycaemia or hyperglycaemia. Following the intervention, 17 of 50 patients did not fast; 26 patients followed dietary advice, while 7 patients did not. Symptoms suggestive of hypoglycaemia and hyperglycaemia were reported by 21 of 33 patients who fasted and 21 of 28 patients reported lower body weight. Insulin and hypoglycaemic drugs were changed from morning to evening dosing in 41% of patients while 18% of patients had their drugs stopped.
Conclusion. An educational intervention generated awareness among the patients and helped 43 of 50 patients in making rational decisions about control of diabetes during Ramadan.

Fasting during Ramadan is one of the five main pillars of Islam and is passionately practised by millions of Muslims across the world. During the fast, healthy adult Muslims are required to refrain from oral intake of food, water, beverages or drugs. Most people eat two meals––before sunrise (Suhur) and after sunset (Iftar).

Although the Quran exempts those who have an illness from fasting, the majority of Muslims who have diabetes do not perceive themselves as ill and observe fasts.[1] The nature of Ramadan fasting may affect glycaemic levels and/or medical compliance of the patient. Moreover, such patients may be at a higher risk of hypoglycaemia, hyperglycaemia, diabetic ketoacidosis (DKA), dehydration and thrombosis.[2],[3]

The first guideline for the management of diabetes during the month of Ramadan was issued in 2005 by the American Diabetes Association (ADA) in which monitoring was recommended before, during and after Ramadan, and educational programmes for patients were proposed to help them reduce the above-mentioned risks.

The objective of Ramadan-focused education is to raise awareness of the risks associated with diabetes and fasting, and to provide strategies to minimize them. In reported studies, Ramadan-focused educational programmes have been successful in preventing serious acute events in people with diabetes.[2],[4] The pivotal Epidemiology of Diabetes and Ramadan (EPIDIAR) study, done in 13 countries including India involving 12 914 patients, showed that only two-thirds of people with diabetes received recommendations from their healthcare professionals (HCPs) regarding management of diabetes during Ramadan and highlighted a need for more intensive education before fasting.[5] In the more recent CREED study, which was conducted in 13 countries including India, 96% of physicians said that they provided advice to fasting patients, although only 63% used guidelines or recommendations to do so. In addition, only 67% of physicians used a Ramadan-focused educational programme; however, specific data regarding Indian patients are not available.[6]

Although the guidelines for the management of diabetes during Ramadan are available, it is not known to what extent these guidelines are followed in routine medical practice in India. In addition, lifestyle changes and alterations in the treatment during Ramadan in India remain largely unknown.

In this pilot study, we attempted to ascertain the present state of knowledge of patients who practise Islam, regarding diabetes, its management during Ramadan fast and the acceptance of an educational intervention on lifestyle modification.

The study was designed in two parts. Initially, a survey was done and after analysing the results, an educational intervention was done. The duration of the study was 6.5 months.

The survey was conducted to assess the experience of Muslims with diabetes during the month of Ramadan fast and their knowledge regarding the required lifestyle modifications. We used a questionnaire based on guidelines meant for management of diabetes during Ramadan fast [Table - 1]. We referred to the guidelines of ADA and International Diabetes Federation in collaboration with Diabetes and Ramadan International Alliance (IDF-DAR).

Table 1: Details of the survey questionnaire

The pre-Ramadan structured diabetes education and counselling programme was a 2.5-month study and 50 patients were included [Table - 2]. Those patients who did not observe fast during the previous Ramadan were excluded from the intervention.

After the pre-Ramadan assessment (PRA) patients were sent for a counselling session. Each patient was explained about the study and they were given a consent form. After obtaining consent, either individual or group counselling was done. The patients were informed about diabetes, symptoms suggestive of hypoglycaemia and hyperglycaemia, risks of fasting, conditions in which they should end their fast and lifestyle changes including diet and exercise that were required during Ramadan to reduce the risks associated with it. In the second week of Ramadan, the patients were followed for symptoms suggestive of hypoglycaemia and hyperglycaemia. After Ramadan the patients were called for a post-Ramadan follow-up wherein their weight, and symptoms suggestive of hypoglycaemia and hyperglycaemia, if any, were recorded. They were also queried to check their adherence to the dietary and medical advice.

A handout was prepared as a reference tool for the patients. It contained diet charts of 1600, 1800 and 2000 kcal that could be followed during Ramadan. The food items in the diet chart were selected on the basis of the glycaemic index. Food items of low glycaemic index were preferred, and their quantity was adjusted as per calorie requirement. Patients with <150 cm height were given 1600 and 1800 kcal diet chart and patients with height >150 cm were advised 2000 kcal by the dietician. This distribution of calories on the basis of height was obtained from the IDF-DAR practical guidelines. The patients were also sent to the dietician for dietary advice. The diet consisted of 45%–50% of carbohydrates, 20%–30% of proteins and 20%–35% of fats.

The handout also had sections on general advice for patients on lifestyle modification and warning symptoms of hypoglycaemia and hyperglycaemia. The medical advice given by the HCP after the PRA was recorded with all the demographic and medical data.

The survey was approved by the Research Project Advisory Committee (RPAC) of Hamdard Institute of Medical Sciences and Research and by the Jamia Hamdard Institutional Ethics Committee (JHIEC). Similarly, the trial was approved by RPAC and JHIEC. The intervention was registered in the Clinical Trials Registry of India (CTRI registration number CTRI/2017/06/ 008747). Informed consent was obtained from each patient who participated in the study.

The primary outcome was acceptance of the intervention and the secondary outcome was weight control in patients. The study was carried out in the outpatient of the internal medicine department in Hakeem Abdul Hameed Centenary Hospital.

Data are presented as percentage of patients providing feedback of their experience during Ramadan, the demographic data such as age, height, weight and body mass index (BMI) are presented as mean (SD) and the population participating in the survey and intervention was compared using a Z test.

Table 3: Demographic details of patients participating in the survey and the intervention

The study individuals were relatively young, mean age being 51.5 years in the survey and 47.2 years in the intervention ([Table - 2]; Z=2.54, Zα=1.96 at 5%), the mean BMI was also similar in the survey and intervention individuals (Z=1.26) of the two sample populations (Zα=1.96 at 5%). In the survey, only 14.7% of patients volunteered for PRA [Table - 4]. About 42% of patients believed that pricking skin for blood glucose testing will invalidate their Ramadan fast. About 35% of patients claimed that they did not experience any unusual conditions while fasting, but when individual symptoms of hypoglycaemia, hyperglycaemia and dehydration were enquired, more patients responded in the affirmative [Table - 4]. Only 25.9% of patients followed a specific meal plan during Ramadan. 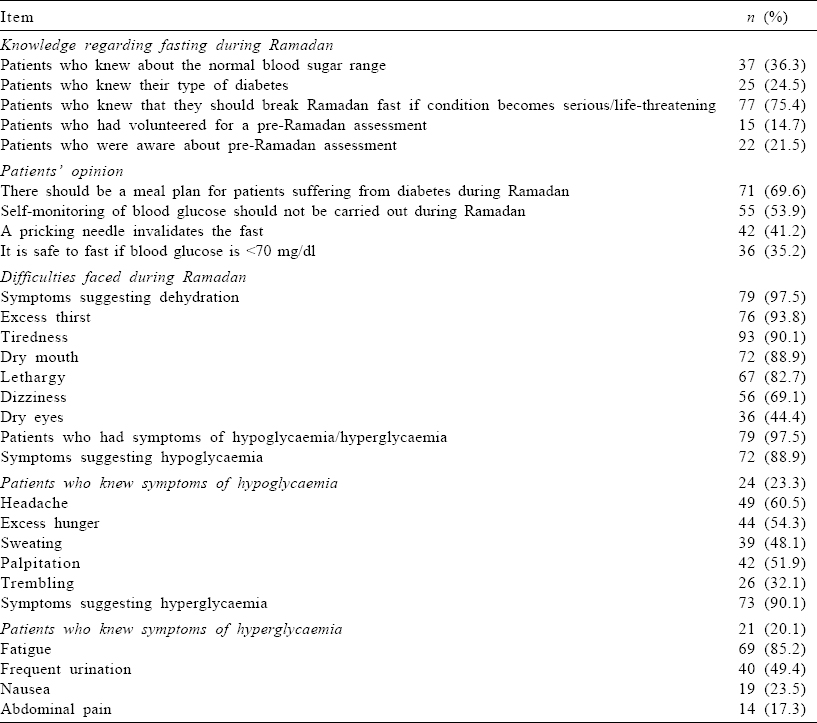 Table 4: Knowledge of patients and their attitude towards self-care and health complaints during Ramadan, recorded during the survey

About 79.4% and 66.7% of patients with type 2 diabetes mellitus (T2DM) reported fasting during Ramadan in the survey and intervention, respectively [Table - 5]. In the survey, 46.1% received medical advice regarding fasting during Ramadan; 7.8% were allowed fasting and 38.2% were advised against fasting while in the educational intervention all patients received medical advice wherein 52% were allowed to fast and 48% were advised against fasting. 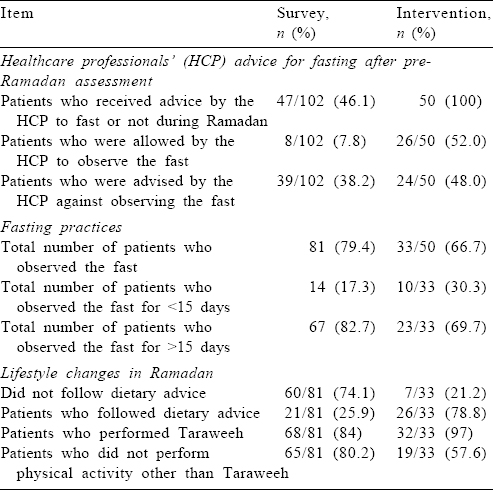 Table 5: Fasting practices and lifestyle changes of patients during Ramadan

Demographic and anthropometric data of patients participating in the survey and the intervention were similar, although the intervention had slightly younger patients. The study population of the present study was similar to the patients included in EPIDIAR (54 years) and CREED (56.9 years) studies. The average age of the intervention population in our study (47.2 years) was lower than those who received the educational intervention in the READ programme (group A 58.1 years),[4] a study conducted among patients with diabetes in the UK, where there was 58.2% risk reduction with a structured educational programme provided before Ramadan. There is no effect of age on the knowledge and attitude towards diabetes as a disease among the patients who suffer from it.[7]

In the survey part of our study, <50% of the study population received PRA and <10% of them were allowed by the HCP to fast during Ramadan. This was contrary to the retrospective, multicentre CREED study where 96% of investigators reported fasting-specific advice to the patients. While the information was requested from physicians in the CREED study, the relevant information was collected from the patients in our study.

Fewer patients observed the Ramadan fast after the intervention in the present study indicating that most of them understood the effect of fasting on diabetes and their health, if explained in a culturally sensitive manner. The intervention reduced the communication gap between the HCP and patients. Furthermore, the patients who observed fast against medical advice were put under closer supervision of the HCP, thereby ensuring safer fasting.

It should be noted that Ramadan is not only a religious fasting period, but also a festival that is celebrated every day after sunset during this month. This feasting period leads to increased intake of meals rich in carbohydrate, supersaturated oils and sugar. This can contribute to hyperglycaemic episodes in the evening and increase in weight of the patients. Observations from the READ programme suggest that people who fast during Ramadan gain weight.[4] This is also a challenge in achieving control in diabetes during Ramadan. In the present study, a diet chart was provided to the patients overcoming this challenge. Twenty-one of 28 individuals had reduced body weight after Ramadan compared to their pre-Ramadan weight (mean 2.86 kg) while in the READ study, there was a mean weight reduction of 0.7 kg (n=57, p<0.001, 95% confidence interval –0.98 to –0.42) after Ramadan.

Thus, the survey concluded that the knowledge of patients regarding diabetes was low and their opinion regarding fasting practices was not correct. The lack of knowledge and awareness among patients resulted in a large number of them fasting without medical advice and experiencing events that suggest hyperglycaemia, hypoglycaemia and dehydration. Educational interventions help in creating awareness among patients and can aid in achieving safer fasting practice by controlling weight and frequency of events that suggest hypoglycaemic and hyperglycaemic symptoms.

However, it should be noted that the present study was a pilot study to identify the acceptability of the educational intervention. The sample size in the intervention population was small, thus a multicentric study is required to reliably record benefits from an educational intervention. In addition, in the absence of a concurrent control population, there is a possibility that other factors apart from the intervention might have contributed to the weight gain/loss observed in the patients participating in the study.

Thus, we suggest that educational programmes should be carried out for patients with diabetes to generate awareness and for HCPs to be more sensitive to the patients' needs before the month of Ramadan. However, such programmes should be first evaluated involving a control group with a large sample size and capillary monitoring of blood glucose, to record the benefits reliably.