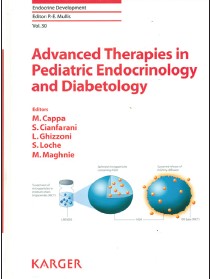 This book is a part of Endocrine Development, a series of published proceedings of workshops and symposiums held on the latest in advanced therapies for endocrine disorders. The chapters provide the latest information on innovative technologies used in the treatment of paediatric endocrine disorders. Written by the very experts leading these advances, it is of immense interest to paediatric endocrinologists and endocrinologists wanting to stay abreast of the developments, many of which are likely to emerge as future therapies.

The future of therapy for type 1 diabetes lies in the development of an ′artificial pancreas′ that would act as a glucose sensor and insulin pump simultaneously. The chapter on the automation of insulin delivery devices discusses advances in the development of closed loop insulin delivery systems. Other future therapies, including islet cell transplantation, and the current status and indications both of autotransplantation (carried out after pancreatectomy for chronic pancreatitis) and allotransplantation in type 1 diabetes, are discussed in detail.

Childhood obesity is a challenging disorder to treat and is often refractory to lifestyle modification, diet and drugs. However, the emergence of new pharmacotherapy may change this situation by giving us hope of an effective therapeutic option. Glucagon-like peptide-1 (GLP-1) receptor agonists have been widely used in adults with type 2 diabetes and have been found to be effective in causing weight loss among obese patients. Randomized controlled trials (RCTs) in the treatment of adolescent obesity with GLP-1 receptor agonist, exenatide, have shown promising results and the book covers the literature and mechanism of action of exenatide in detail. Non-alcoholic fatty liver disease (NAFLD) is a complication of obesity, for which there is no effective therapy currently. The n-3 polyunsaturated fatty acid, docosahexaenoic acid, is emerging as a potential therapy for this condition. It is postulated to have anti-inflammatory effects and insulin-sensitizing properties through its action on G-protein-complex receptor 120 (GPR-120), which is expressed in hepatic macrophages. In randomized trials of paediatric NAFLD, docosahexaenoic acid improved insulin resistance, and decreased serum triglyceride levels and hepatic steatosis.

The prenatal diagnosis of congenital adrenal hyperplasia (CAH) and treatment of affected foetuses in utero has been an area of controversy. Treatment with dexamethasone before 9 weeks′ gestation prevents virilization of affected female foetuses. However, such therapy entails exposure of unaffected foetuses to steroids till the diagnosis is ruled out by chorionic villus biopsy/amniocentesis in the second trimester. Hence, an early diagnosis of CAH (before 9 weeks of gestation) by non-invasive methods would be useful in preventing unnecessary treatment of unaffected foetuses. Experts in this field are discussing an innovative strategy for early prenatal diagnosis that could be validated in the clinical setting later on.

Hydrocortisone is the mainstay of therapy in CAH and adrenal insufficiency. It is difficult to replicate the physiological circadian rhythm with the current drug regimens. This causes metabolic complications among these patients and results in a poor quality of life. The chapter on hydrocortisone therapy discusses advances in the development of new, improved, modified dual-release hydrocortisone formulations (Chronocort; , Plenaderm; ) and subcutaneous infusion.

The chapter on the treatment of hypogonadotropic hypogonadism covers the physiology of puberty, including physical changes in puberty and the aetiology of delayed puberty. Clinicians would find the discussion on the management of delayed puberty very useful. The discussion on the kisspeptin/neurokinin B (NKB)/dynorphin neuropeptide system, which regulates the gonadotropin-releasing hormone (GnRH) pulse regulator of puberty, makes for interesting read. There is an additional chapter on neuroendocrine agonists and antagonists of the kisspeptin/NKB system in modulating the hypothalamic-pituitary-gonadal axis. The chapter discusses the future therapeutic uses of these drugs, such as for pubertal disorders and anovulatory conditions, including polycystic ovarian disease.

Current topics of interest, such as long-acting growth hormone (GH) analogues, are covered in detail. At present, GH therapy is administered daily, but the compliance rate is poor and this decreases the therapeutic response. If it is given once a week, compliance might improve. The technologies used to develop sustained release GH are discussed in depth and various manufacturers′ formulations, mostly in phase 2/3 trials, are presented. The advantages and disadvantages of long-acting GnRH analogue histrelin implants (for the treatment of precocious puberty) and aromatase inhibitors (used for idiopathic short stature) are covered well in the respective chapters.

It is heartening to know that effective therapy is on the horizon for achondroplasia, the most common skeletal dysplasia for which no real therapy existed hitherto. This is in the form of C-type natriuretic peptide analogue, which is undergoing phase 2 trials. The chapter on gene therapy and novel therapeutic drugs for modifying disease progression in adrenoleukodystrophy is an eye-opener. These two chapters, as well as the discussion of prenatal diagnosis of CAH, would be of interest to medical and clinical geneticists.