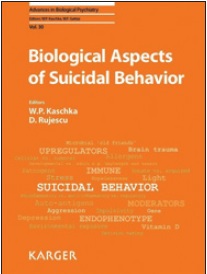 Suicidal behaviour is an important public health is sue, which poses a maj or challenge in terms of risk identification and prevention. The phenomenon of suicide is a complex one, determined by interactions between diverse factors. Despite decades of research, a comprehensive understanding of the aetiology of suicidal behaviours remains elusive. In the twenty-first century, much of the research has focused on finding biological correlates of suicide and related behaviours. Recent advances in biological research, using various genetic, molecular, neurochemical and neuroimaging approaches, have yielded new insights into the pathophysiology of suicide. The rapidly evolving knowledge base holds potential for the development of novel therapeutic interventions and preventive strategies. This book aims at providing a comprehensive overview of the neurobiological and psychopharmacological aspects of suicide, and critically examines the existing body of research evidence. It forms part of the series of books titled Advances in Biological Psychiatry, which focuses primarily on bringing clinicians and researchers up to date on the latest international research in selected areas. The editors of this volume are experienced researchers in the field of suicidal behaviours and meaningfully showcase the contributions ofvarious international experts from a wide range of disciplines. This book is essentially a compendium of the latest scientific reviews covering a broad spectrum of topics. It offers interested clinicians and researchers an amazing opportunity to keep pace with continuing developments in the field of suicidology.

The book is well-organized and sequentially elucidates the neurobiological underpinnings of suicidal behaviours occurring independently and across mental disorders. It begins by describing the global epidemiology of suicide, stating the magnitude of the problem and its public health impact. Further sections synthesize the evidence and analyse the role of neurotransmitters, genetics, neuropsychology, neurophysiology, imaging and immunological factors in predicting suicidal behaviours. Several proposed pathophysiological mechanisms and their potential therapeutic implications have also been discussed. These sections are sub-categorized into individual chapters, which are very informative and present an analytical critique of the latest studies in relevant areas.

Conceptualizing this volume is reflective of good academic writing and the book has several positive features. There is an implicit emphasis on scientifically synthesizing the current state of knowledge rather than merely listing or cataloguing evidence from research studies. One particular strength of this book, across all its sections, lies in the thorough discussion of the intricate methodological and ethical challenges of conducting research on suicide. The chapters are enriched with updated literature, empirical data supporting the authors’ arguments and extensive bibliographies that are helpful for cross-referencing to those interested in a deeper study. Some of these chapters succinctly describe the authors’ own original work in the area, comparing it with previous literature and attempting to evolve a hypothesis. One of the chapters, titled ‘GABA, depression and suicide’, makes for interesting reading for clinicians and researchers alike. In it, the authors highlight the salient findings of their research group and critically evaluate the existing evidence in support of the role of the dysfunction of the GABA system in suicide. They also successfully focus the reader's attention on their proposed model that links molecular and cellular changes to the symptom dimensions in depression and suicide, and its potential therapeutic implications. Another well-written chapter, ‘Neurocognitive processes and decision-making in suicidal behavior’, integrates the latest findings from neuropsychological and functional neuroanatomical research to explore the role of specific neurocognitive impairments in increasing the vulnerability to suicide. Besides evaluating the current behavioural findings, the chapter logically traces the pathways linking reduced cognitive control and deficient abilities in the area of value-based decisionmaking to a range of suicidal behaviours. The chapter, ‘The contributions of lithium and clozapine for the prophylaxis and treatment of suicidal behavior’, is a must-read for all psychiatry residents. It presents a focused commentary on the psycho-pharmacological mechanisms of the anti-suicidal properties of psychotropic agents. The authors meticulously scrutinize the strength of the documented evidence supporting the unique specific effects of lithium and clozapine, and debate the promising possibilities that could explain these interesting observations.

On the flip side, this book has a few limitations, especially from the perspective of students and clinicians. The content in a few sections is highly factual and dense on information, which makes it tedious to read. The presentation of information could have been more user-friendly, e.g. tables and illustrations could have been added while explaining complex theoretical concepts and summarizing research findings. The book attracts a selective readership, primarily biological researchers and academicians. Its value is limited to serving as a reference guide for trainees and practising psychiatrists. Although the authors have tried to comprehensively translate the biological evidence into clinically relevant information, some of the chapters could do with detailed elaboration on the clinical implications of their conclusions. For the sake of completeness, it would have been desirable had the editors addressed conceptual issues related to defining suicidal behaviours and given an overview of the ‘deliberate self-harm’ spectrum in the first section of the book. Non-suicidal self-injury (NSSI), which is known to predispose a person to suicidal behaviours, is currently a subject of intense neurobiological investigation. A brief synopsis of the current research in this area, illustrating the biological relationship between suicidal and non-suicidal self-harm, could have been a meaningful addition to this volume.

Overall, this is a clear, concise and up-to-date research work, which is ideally suited for a medical library. The book succeeds in fulfilling its objective of highlighting the recent advances and future directions in the field of suicide studies. It has the potential to serve as a key reference material on the subject for psychiatry trainees and faculty, and a valuable resource for suicide researchers.