The dawn of medical oncology

Throughout human history, cancer has primarily been viewed as a disease of excessive growth or proliferation. Hence, treatments for cancer focused on removing the new growth or killing the proliferating cells. Modern medical oncology began evolving as a byproduct of chemical warfare during the Second World War, based on the antilymphoma effect of nitrogen mustard. The following 40 years witnessed the discovery, development and approval of numerous chemotherapeutic agents. The principles of combination chemotherapy were established. Empirical efforts resulted in dramatic successes such as high cure rates in Hodgkin disease, childhood acute leukaemia and testicular cancer. However, the same trials also revealed that chemotherapy was associated with major toxicity due to mechanism-related adverse effects on normal tissues and had limited efficacy in most of the common solid tumours.

The advent of molecular techniques for analysis of nucleic acids made it easier to interrogate the genetic changes in cancer. These technologies also laid the foundations for biotechnology drugs that would change the nature of therapeutics, especially in oncology, forever. The first example of efficacy of these drugs against cancer was the use of alphainterferon in the treatment of hairy cell leukaemia and chronic myelogenous leukaemia, which led to complete remissions in many patients.[1],[2] Through the 1980s, the oncogene hypothesis of cancer was firmly established and culminated in the acceptance of multistep genetic evolution of cancer.[3] An understanding of the molecular genetic changes led to the discovery and development of first-generation oncogene-directed therapies, namely, imatinib (small molecule tyrosine kinase inhibitor [TKI] of abl kinase) and trastuzumab (humanized monoclonal antibody against human epidermal growth factor receptor 2 [HER2] oncoprotein).

Resistance to chemotherapy is often multifactorial and poorly understood. However, when a treatment is targeted to a specific genetic alteration, it is feasible to interrogate the patient's tumour to delineate escape pathways. Such an understanding can lead to second-generation treatments targeted against specific resistance mechanisms. Excellent examples of these include second- and third-generation TKIs against resistant mutants of EGFR (e.g. afatinib and osimertinib) and bcr–abl (ponatinib) as well as antibodies against HER2 (e.g. pertuzumab and ado-trastuzumab emtansine). This trend is likely to continue.[4]

Even as treatments directed at genetic alterations led to dramatic improvements in outcome for certain subgroups of difficult-to-treat, bad prognosis tumours, it also became clear that the evolution and sustenance of tumours are far more complex than a relatively simple linear model of multistep genetic evolution. It is increasingly being recognized that the behaviour of cancer and its response to treatment reflects a complex interplay between the tumour cell, its microenvironment and the host. This has led to the development of therapies that target the tumour microenvironment. At present, these can broadly be divided into two categories: (i) treatments that overcome the immunosuppressive effects of tumours; and (ii) treatments that redirect immune cells to attack the cancer cells.

Overcoming immunosuppressive microenvironment: Inhibitors of checkpoint activators The first among the current wave of drugs in this category is ipilimumab. It targets cytotoxic T-lymphocyte-associated antigen 4, a known checkpoint protein that is expressed on regulatory T-cells and dampens the immune response. It showed a modest ~10% response rate in melanoma, often at the expense of considerable toxicity related to multiorgan autoimmune side-effects. However, it was noted that responses, albeit infrequent, were durable and about 20% of patients with melanoma treated with this drug had durable benefit leading to improved survival.[5] This was followed by the development of antibodies targeting another checkpoint, programmed death 1 (PD-1). These antibodies have shown activity in subsets of patients across numerous tumour types and many are approved to treat a variety of common tumours including melanoma, NSCLC, renal cell carcinoma, hepatocellular carcinoma and Hodgkin disease. Clinical data suggest that these antibodies are most efficacious for patients whose tumours express PD-L1 and/or are genetically unstable. Many other checkpoint inhibitors are currently being tested in clinical trials, as monotherapy and in combinations.[6]

An alternative and highly potent approach is to harness T cells for antitumour effect directly using antibodies or living cells. The antibody approach utilizes bispecific scaffolds where one part of the scaffold is directed towards an antigen on tumour cells, and the other part is directed to T cells. The first such construct to progress to phase 3 trials and be approved is blinatumomab, a bispecific T cell engaging antibody-directed against CD19 and CD3. This showed high rates of complete remission in relapsed/refractory B cell acute lymphoblastic leukaemia (ALL) as well as diffuse large cell lymphomas.[7]

An alternative approach involves engineering a patient's own T cells to fight their own cancer. These cells are called chimeric antigen receptor (CAR)-T cells. CARs are engineered molecules that have a tumour targeting ectodomain of the variable chain of an antibody linked to T cell signalling domains. The objective is for T cells to be activated upon binding of the ectodomain to the tumour cell surface leading to killing of cancer cells. The process involves taking a patient's T cells, growing them in the laboratory, transfecting them with the relevant CAR and administering the cells back to the patient. This field is still in its infancy with numerous issues related to optimization of production, clinical treatment paradigm and toxicity still to be sorted out. A detailed discussion of these is outside the scope of this editorial. However, even at this early stage, dramatic efficacy has been observed with a number of constructs. The first cellular therapy based on this approach has recently been approved to treat children with ALL and more are expected.[8]

The reasons for the lack of responsiveness of the majority of tumours to drugs such as anti-PD-1 antibodies are likely to be multifactorial. However, some important insights are beginning to emerge. One such insight is that certain tumours are ‘cold’, i.e. they lack the immune-inflammatory infiltrate required to mount an anticancer attack. One promising approach to convert these tumours to ‘hot’ tumours is the use of oncolytic viruses. Viruses are effective in activating the innate arm of the immune system leading to production of type 1 interferon, increased expression of major histocompatibility complex (MHC) molecules as well as immune co-stimulatory ligands, etc. Lytic virus replication also results in the release of various cellular components and cell fragments, which may also lead to the induction of adaptive immunity. Intratumoural injection of such a virus, talimogene laherparepvec led to improvement in overall survival in a phase 3 trial in melanoma.[9] This is the first time a local therapy has produced survival benefit in patients with systemic disease. This confirms that the virus is working more like a therapeutic cancer vaccine rather than simply causing lysis of cancer cells. It is particularly interesting that this virus in combination with an anti-PD-1 antibody in a phase 1 study led to the conversion of ‘cold’ tumours to ‘hot’ and an even higher response rate with excellent durability, which merits further investigation.[10] Many other approaches, both local and systemic, to modify the tumour microenvironment are under investigation.

A look to the future

We have entered the golden age of oncology. Our understanding of the molecular basis of cancer is increasing rapidly, leading to many new drugs and other modalities of cancer therapy [Table - 1].[11] This pace will only accelerate over the next couple of decades and we can expect that each patient's treatment will be dictated by a comprehensive understanding of their tumour's molecular phenotype and the associated microenvironment.[4] This will obviously be expensive for patients and healthcare systems. The issue of ‘financial toxicity’ of cancer drugs has become imminent, but is outside the scope of this science-focused editorial. The reader is referred to other thoughtful publications on this topic.[12] It is important to ensure that cost concerns do not derail us from the journey we are on, a journey that will lead us to cure an increasing number of patients with cancer and will convert most other patients' cancers to chronic diseases that they can live with for an extended period of time. 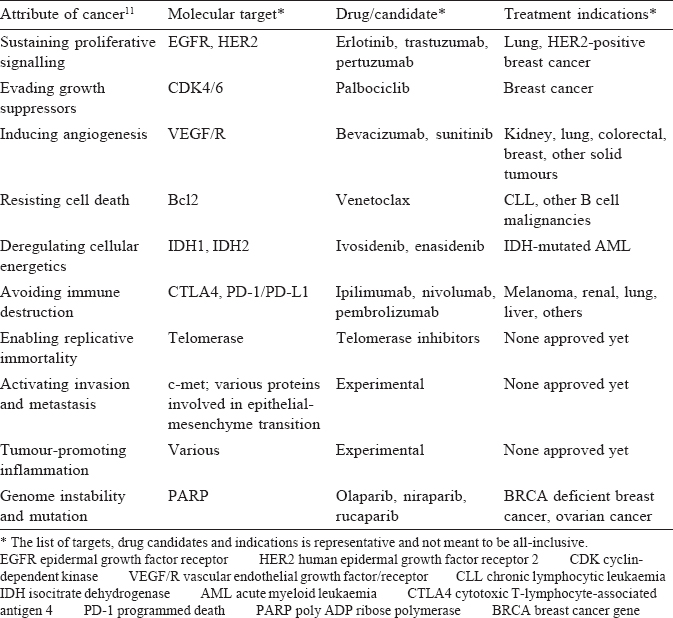 Table 1: Targeting the hallmarks of cancer

Conflicts of interest. None