Burden of poisoning on a critical care unit in southern India

Background. Poisoning inflicts a considerable economic cost on the health sector. Few cases of poisoning may require intensive management in a critical care unit and thus add to the financial burden. In this study, our primary objective was to analyse the financial burden of poisoning on critical care facilities and the secondary objective was to analyse the critical care needs and treatment outcomes of patients with poisoning.
Methods. We did this retrospective study of patients admitted with poisoning in the critical care unit of Government Medical College Hospital, Thiruvananthapuram, Kerala (12- bedded critical care unit of 2500-bedded medical college hospital) from January 2011 to December 2013. Patients <13 years of age were excluded. Cost was estimated using the hospital expenditure data.
Results. A total of 118 patients, comprising 2.5% of the total critical care unit admissions, were included in the study. The average cost of providing critical care for cases of poisoning was ₹367 333 per annum. Organophosphorus poison was the most common agent (33.9%) with the highest cost per admission of approximately ₹1 8 500. The highest number of deaths was due to phosphide poisoning with a case fatality rate of 83%.
Conclusions. Poisoning imposes a considerable burden on the limited critical care services. Organophosphorus was the most common substance consumed for poisoning and it led to the highest expenditure per admission.

According to a study in 2012, the age-standardized suicide death rate per 100 000 people was generally higher in southern India, with the highest in Kerala for men and in Tamil Nadu for women.[4]

During the study period, a total of 118 patients with poisoning (40 women and 78 men) were admitted to the critical care unit, comprising 2.5% of the total critical care admissions. Fifty per cent of the study population was >40 years of age [Table - 1]. The number of patients admitted in the first 2 years were 47 each and in the last year were 24. [Figure - 1] shows the month-wise trend of admission to the critical unit due to poisoning. Organophosphorus was the most common poison consumed (34%; [Table - 2]); it incurred the highest cumulative expenditure (₹830 000) and highest expenditure per admission (₹18 500; [Table - 2]). The cost to facility for providing critical care for poisoning was ₹102 000 for 2011–2013 with a mean of ₹367 333 per year [Table - 3]. The cost of medications other than atropine was not analysed. Considering the per capita income of Kerala in 2012 to be ₹90 000 and the mean age of 33 patients who died to be 44 years, the approximate cost of life would be ₹4 752 000. 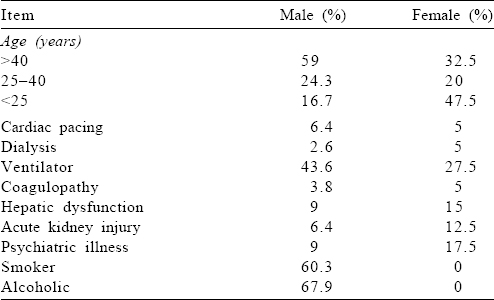 Table 1: Baseline characteristics of patients admitted to the critical care unit due to poisoning

Table 3: Cost to critical care facility for treating patients admitted due to poisoning

The mean (SD) duration of hospital stay was 4.6 (9.4) days and the longest duration of 15 days was for a patient admitted with consumption of Strychnos nux-vomica. Ventilator, temporary pacemaker and dialysis were required in 45, 7 and 4 patients, respectively. Mechanical ventilation was required mainly for organophosphorus poisoning (23 patients) and temporary pacemaker for 5 patients with cardiac glycoside (odollum) poisoning. The highest number of deaths was due to aluminium phosphide poisoning (10) with a case fatality rate of 83%.

Our study confirms that organophosphorus is most commonly used as a poison in India, as in other Asian countries.[5] Patients with organophosphorus poisoning remained in the critical care unit for a longer duration (6.5 days) and caused the highest expenditure, compared to other patients with poisoning. This has implications, especially for the public sector health service in a tropical location struggling with a huge burden of infectious diseases and trauma.

We calculated expenditure based on the data from the hospital’s financial statistics. The results are likely to be lower than the actual expenditure because we included only the expenditure of the critical care facilities. The cost of medications used in the treatment of these patients was not analysed. Moreover, considerable expenditure might have been incurred after the patient was shifted to the ward.

It is difficult to limit expenditure in the treatment of patients with poisoning. One way of reducing the expenditure is to limit unnecessary hospitalization of patients with poisoning.[6] The low frequency of completed suicides in relation to attempts and reported ideation indicates that most inpatients labelled suicidal are hospitalized unnecessarily.[7] Thus, inpatient treatment should be considered for those whose attempts have a high chance of being lethal and those with suicidal ideation who are at a high risk because of other factors. However, this cannot be applied to patients with poisoning who are critically ill and require ICU care.

According to studies from India, common contributors to suicide are a combination of social problems such as financial difficulties, interpersonal and family problems and pre-existing mental illness.[8],[9] An effective model for decreasing expenditure due to poisoning is to address the root cause and thereby prevent poisoning. Hence, the production and distribution patterns of organophosphate and carbamate agents need to be investigated, as these were the common and most expensive agents in our study.

This study is limited by its retrospective nature. In the case files, some patient information such as marital status, income, educational status, comorbid conditions and reason for self-harm were not obtained or documented. Few of the patients were lost to follow-up in the wards. As this study was retrospective, it was not possible to determine whether poisoning was accidental (mainly organophosphorus compounds).

Poisoning imposes a considerable burden on government’s limited resources. The cost of critical care unit for poisoning cases was on average of ₹367 333 per annum.

Organophosphorus poison was the most common agent ingested (33.9%) and the approximate cost per admission due to this agent was ₹18 500. Sales of these compounds need to be urgently regulated. There is a need for public health education on the dangers of ingesting such substances.