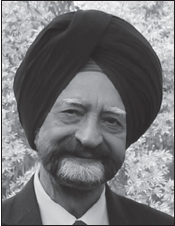 Professor Kirpal Singh Chugh, fondly called the Father of Nephrology in India, passed away in Chandigarh, India on 17 September 2017. He was 85 years old.

Born on 12 December 1932 at Patti, a village 48 kilometres away from Amritsar, the city of Golden Temple, Dr Chugh did his MBBS from Medical College, Amritsar. Nephrology was on the move in the 1950s, with the invention of dialysis machine, the introduction of kidney biopsy as a diagnostic tool and successful kidney transplantation. Remarkably, he followed these developments as a medical student from India.

His tenacity and refusal to take no for an answer, for which he would become known and even feared, came to light early when he chose ‘Evaluation of renal biopsy as a diagnostic procedure’ as the topic for his MD thesis and applied to Panjab University for permission to do MD (Medicine) with kidney diseases as a special subject. Only cardiology, gastroenterology and neurology were the recognized disciplines at that time; so while his thesis plan was approved, the request to consider kidney diseases as a special subject was denied on the grounds that it did not exist anywhere in the world. Undeterred, he reapplied, was again refused but succeeded in his third attempt, evidently with a comment from the Dean of the Faculty of Medical Sciences, ‘this person seems to be mad, let him do MD Medicine with kidney diseases if he ' s insistent on doing so '.

This episode encapsulated Dr Chugh's approach to seemingly insurmountable problems. This never-say-die attitude helped him push through and do what others had given up on—he did the first percutaneous kidney biopsy and the first peritoneal dialysis in India.

In 1965, he set up the nephrology department at the newly established Postgraduate Institute of Medical Education and Research (PGIMER), Chandigarh and started the first training programme in South Asia, which would ultimately be his biggest legacy.

Through this rigorous training programme, he inculcated a culture of excellence, spirit of enquiry, global leadership and high aspirations among his students. He would invite world leaders in the field of nephrology to visit PGIMER and spend time with the residents, to ignite high expectations and a responsibility to contribute towards advancement of science and patient care. The residents he trained over a span of three decades went on to lead nephrology departments in India and abroad, and achieved leadership positions at the highest levels of global nephrology societies. He is rightfully acknowledged as the Dronacharya of Nephrology, after the legendary teacher in Mahabharata.

Dr Chugh enjoyed the cut and thrust of academic discussions. Disagreements during ward rounds were resolved over coffee with opening of textbooks and journals of nephrology. Sentences would be dissected and the meanings clarified. Acceptance of a student having the better argument was grudging, but one could sense that he respected the student adversaries for successfully defending their positions. This spirit of enquiry, taking responsibility for one's patients and decisions and fighting for one's convictions is what embodied the training at PGIMER.

He was the first renal researcher in India. His obsessive recordkeeping was the reason the world got to know of epidemiology of kidney diseases in India, and woe betide a student who mislaid an important piece of evidence—an X-ray, a piece of tissue or a case file. The pioneering work on snake-venom-induced acute renal failure in animal models in his laboratory was ahead of its time. His research work in Tropical Nephrology and kidney disease in the developing world is reflected in his long list of publications, numerous textbook chapters, the lectures delivered in conferences and institutions around the world and participation at the high table of nephrology. His distinctive turban and engaging personality made him a standout at global nephrology conferences.

He was an academic writer par excellence. Getting a manuscript draft back from him was a moment of revelation for the aspiring writer. The paper suddenly looked more attractive and made a lot more sense after he had wielded his pen—fixed awkward sentences, struck-off unnecessary adjectives, turned passive voice into active, substituted words or phrases with more meaningful ones, asked for data that mattered, removed unnecessary tables and focused the discussion!

Dr Chugh was the ultimate lifelong mentor to his students. They came first, and he would spare no time or effort to ensure that every clinical, teaching or research question raised had been answered in its entirety. He would protect them fiercely from external ‘threats’ such as criticisms in the infamous PGIMER mortality meetings, support them during presentations in conferences, provide career advice, pull strings to get jobs and fellowships and even manage a posting or a transfer! He took interest in their families, remembered the names of spouses and children and would greet them years later as if the previous meeting had been only the previous week!

His students and colleagues recalled his many qualities, including his exactitude at work as well as social grace out of it. According to Professor M.S. Amaresan, the first to graduate from his training programme in 1971: ‘During the duty hours he was a terror. He was disciplined, punctual, industrious and instilled the same values in those who came under his fold. As a person, however, he was very affectionate, hospitable, simple and humble. '

‘I can say confidently that there was no nephrology in India prior to Dr Chugh. I was lured to PGIMER in February 1965 because he started dialysis,' said Professor V.K. Bansal, an early colleague at PGIMER and currently Professor of Nephrology and Hypertension at Loyola University, Chicago, USA.

His large-heartedness was not constrained; his support and encouragement was recalled affectionately by many who did not train directly under him. Professor Rubina Naqvi, Professor at the Sindh Institute of Urology and Transplantation, Karachi, Pakistan recalls: ‘He was my mentor, my first guiding teacher. For my postgraduation thesis on AKI (acute kidney injury), he brought hand-outs of all his publications on the subject when came to know that I was working on this topic and provided me the tips to proceed with it.' ‘I still remember his advice (and happiness) soon after I joined nephrology. His impact was truly enormous,' recalled Professor Prabir Roy-Chaudhuri, Professor of Medicine and Director of the Division of Nephrology at the University of Arizona Health Sciences.

Many in South Asia looked up to, and received support from, Dr Chugh in their pursuits. Professor S. Adibul Hasan Rizvi, Director of the Sindh Institute of Urology and Transplantation, recalls: ‘I followed his philosophy of promoting indigenous talents to bring them at par with the rest of the world. He was the first nephrologist from the Indian subcontinent who trained indigenously and became a towering personality in the world of nephrology. He was honest, ethical and generous throughout his life. He gave us a sense of pride and confidence that we can stand on our own feet and develop the science of nephrology.'

In addition to his reputation for steadfast devotion to scholarship, Dr Chugh was an embodiment of bonhomie and camaraderie. These qualities of head and heart made Dr Chugh a star in a social setting. No nephrology meeting was complete without his rendition of Punjabi folk songs and ghazals. A true son of Punjab, he could shake a leg when the occasion demanded and would drag the stiff ones to the dance floor. ‘He was particularly adept in charming the spouses of his trainees, who found it difficult to understand why their other halves were so terrified of him. He was more than ably supported by his wife Harjeet in setting a high bar in hospitality and affection that came to be known as a “Chugh trait”, which his trainees took along as they set up departments and institutions of their own’, recalled Dr Brian Pereira, Past President of the National Kidney Foundation of USA.

Dr Chugh's commitment to high-quality patient care remained undiminished till the very end. Managing a programme where the residents do the bulk of clinical work is one thing, but his penchant to write long clinical notes in longhand even in his mid-80s was remarkable, and a matter of curiosity for the fellows in an era when the art of history taking and physical examination has all but disappeared.

The force of his personality meant that everyone who met him had an opinion—many who had their first encounters with him as an examiner felt shaken. His success brought resentment—that he occupied too much intellectual space, and was partial towards his students. The fact was that he cut a path through a jungle so that the journey for others was easier. ‘Young nephrologists of today will hardly know the travails of the handful of nephrologists who established nephrology as a scientific discipline in this country, of whom Dr Chugh was one of the first and certainly the most prominent. He will always have a special place in Indian nephrology, and in the great institution he founded,' said Dr M.K. Mani, chief nephrologist at Apollo Hospital, Chennai and Professor Chugh's peer. Most who j ousted with him at some point eventually came around to respecting him.

The list of influential positions he held in the institutions and organizations he was associated with, and the recognition and awards he received over a 5-decade period is long—and listing them here would be pointless. He will be remembered by his admirers and patients not because of these awards but by how he touched and shaped their lives, and left them better for it.