Disability is an umbrella term for impairments, activity limitations and participation restrictions.[1] Based on the 2010 global population estimates, about 15% of the world's population is estimated to live with some form of disability.[2] The Global Burden of Disease Report has estimated that around 975 million (19.4%) persons aged ≥15 years live with some disability with nearly 190 million (3.8%) having ‘severe disability’ such as quadriplegia, severe depression or blindness.[3] In India, information on physical and mental disability is collected during the census once every 10 years and during periodic surveys by the National Sample Survey Office (NSSO).

Each state in India according to the Constitution has the responsibility, within the limits of its economic capacity and development, to make effective provision for securing the right to work, education and public assistance in case of unemployment, old age, sickness and disablement.[4] Moreover, people with disabilities suffer undue hardships and they continue to be marginalized, discriminated and abused.[4] It is essential that access to affordable healthcare and rehabilitation be offered to persons with disability. The state of Tamil Nadu has a better healthcare system, which is reflected in its better performance in key health indicators compared to other states.[5] There is a need to quantify the burden of disability since this information is essential for the government to formulate policies, allocate adequate resources and implement appropriate intervention programmes for persons with disability.

According to the 2011 Census of India, 1 in every 50 Indian citizens (2.2%) is either physically or mentally disabled.[6] We aimed to measure the prevalence of disability and describe types of disability in Tamil Nadu based on the Census 2011 data. We also estimated the distribution of disabilities by gender, age and geographical regions.

The Census in India is conducted once every 10 years. The 2011 Census questionnaire had three questions pertaining to disability which captured information on (i) presence of mental or physical disability (Yes 1, No 2); (ii) disability type (seeing 1, hearing 2, speech 3, movement 4, mental retardation 5, mental illness 6, any other 7, multiple 8); and (iii) the nature of disabilities (maximum of 3) in people in whom the response to the second question was ‘multiple disability’.[7]

The procedure for enumeration of disability in the census survey and definitions used for various types of disability are outlined in the Manual on Disability Statistics.[7]

Disability rates per 100 000 population were calculated. The 2011 data from C20 Table pertaining to Tamil Nadu was used for the numerator which consisted of the number of disabled persons by type of disability, age, gender and type of residence (rural/urban).[8]

Age-adjusted disability rates calculated by the direct standardization method were used for comparison and ranking of the districts with respect to each type of disability. The 2011 population of Tamil Nadu with the following age intervals: 0–4 years, 5–9 years, 10–19 years, 20–29 years, 30–39 years, 40–49 years, 50–59 years, 60–69 years, 70–79 years, 80+years, and age not stated was used as the standard population for calculating the age-adjusted disability rates. The data were analysed using Microsoft Excel windows 2007. 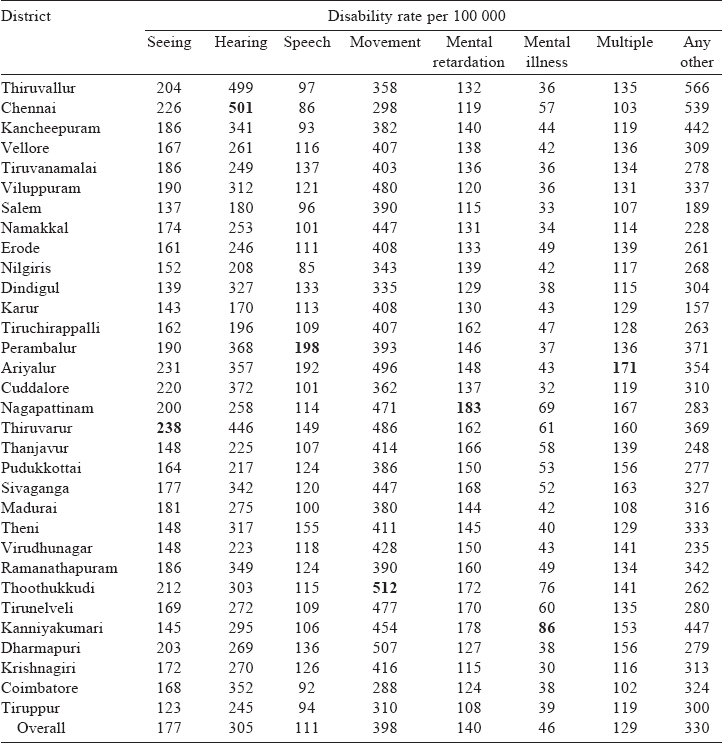 Table 1: Age-standardized disability rates per 100 000 according to type of disability in districts of Tamil Nadu, 2011 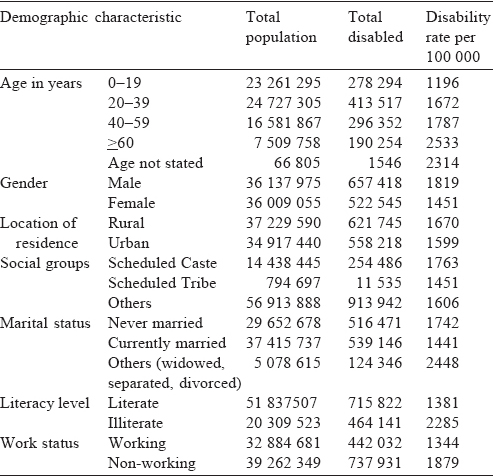 Types of disability by age, gender and residence

Table 3: Differences in type of disability based on age groups 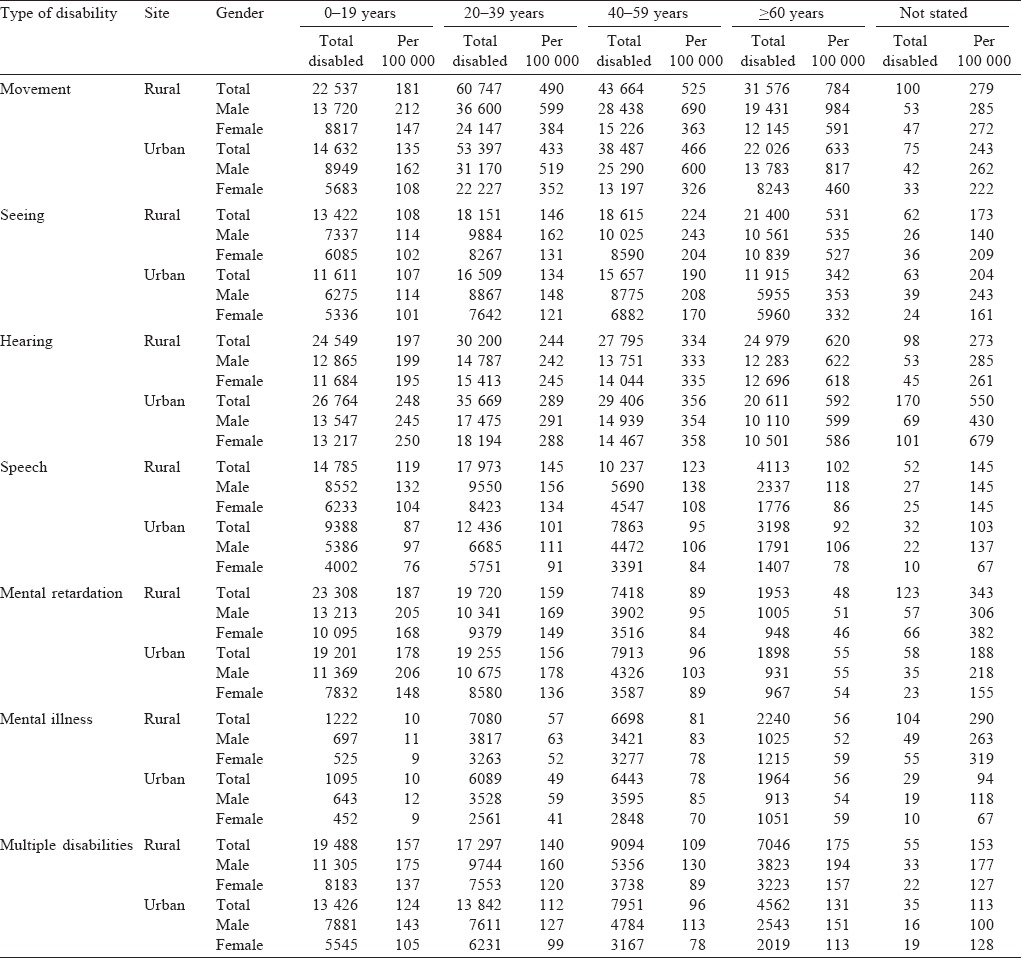 Table 4: Disability rates by age, gender and location of residence (urban/rural) according to the type of disability in Tamil Nadu, 2011

We observed that about 1 in every 100 person in Tamil Nadu (1635 per 100 000 persons) is either physically or mentally disabled based on the data of Census 2011. This is similar to the analysis of 14 household surveys from 13 developing countries, which suggested that 1%–2% of the population have disabilities.[11] In the USA, overall 22.2% of adults reported any disability in 2013.[12] However, the prevalence rates for disability are not strictly comparable owing to the differences in the definition used. The percentage of disabled population to total population in Tamil Nadu (1.6%) is lower compared to other states and Union Territories.[6] The states of Jammu and Kashmir, Sikkim and Odisha had 2.9% disabled in their population.[6] Assam, Meghalaya and Mizoram had lower disabled population (< 1.5%) compared to Tamil Nadu.[6] The reason for Tamil Nadu to have a lower proportion of population with disability could be better healthcare facilities and access to healthcare compared to that of other states. However, this needs further exploration and research for varied disability rates across different states in India.

Old age, other illnesses and injury featured among the main reasons for movement, visual, hearing, speech disability in the country-wide NSSO survey 2002 on disability.[13] The other reasons identified in the survey according to the type of disability were poliomyelitis, cerebral palsy, leprosy, stroke, arthritis for movement-related disability; cataract, corneal opacity, glaucoma, eye diseases for visual disability; ear discharge; noise-induced hearing loss for disability related to hearing and voice disorder, paralysis, injury, mental retardation, mental illness, cleft palate/ lip resulting in speech-related disability.[13] Understanding the causes of disability is important to plan appropriate preventive strategies and research is warranted in this area.

‘Elderly’ is defined as a person who is 60 years or more in age.[14] We observed the burden of disability to be high in the elderly in Tamil Nadu. This would probably increase since the proportion of the elderly (≥60 years) in India by 2026 is projected to be 12.17% of the overall population compared to 8.6% in 2011.[15] The observation of high burden of mental retardation, multiple disability in the age group of 0–19 years (children) and movement, hearing-related disability between 20 and 59 years (economically productive age group) in our analysis is a matter of concern. Identification of factors and predictors of disability in these categories through research studies is critical.

Persons with disability could have been disadvantaged in getting educated, employed or married and this might be reflecting high disability rates in those sections of the population observed in our analysis. Lower educational attainment among adults with disabilities has been reported from developing countries.[11] In the USA, lower prevalence of disability was observed in adults with higher levels of education and among those employed.[12] A study from the Organization for Economic Co-operation and Development (OECD) in 27 countries reported that persons with disability have significantly lower levels of education and working-age persons with disabilities experience significant labour market disadvantage than working-age persons without disabilities.[16] The lives of disabled people are affected by poor health outcomes, lower educational achievements, less economic participation, high rates of poverty and increased dependency.[2] The Government of Tamil Nadu is responsive to the needs of the disabled and offers many schemes and scholarships for rehabilitation of the disabled. These include special education, training, reservation of jobs/ seats in educational institutions, financial assistance, assistive devices and care centres.[17] However, a focus group multicentered study in India done in Chennai, Bengaluru and Delhi among persons with physical, mental and alcohol/drug-related disability has revealed problems pertaining to discrimination, poor awareness regarding social programmes and under-utilization of the available resources to be primarily related to stigmatization of individuals with specific disabilities.[18] The programme managers have to address the barriers to healthcare, rehabilitation, education, employment, support and assistance services and create enabling environments.[2] Rehabilitation builds human capacity and there should be emphasis on early intervention.[2] Integrating rehabilitation into primary and secondary healthcare settings can improve its availability. In addition, training programmes for capacity building of rehabilitation professionals are essential to ensure a continuum of care.[2] Access to assistive technologies has to be improved in terms of availability and affordability.

In India, the Chief Commissioner for Persons with Disabilities at the Centre and a Commissioner in each state are appointed to safeguard the rights of persons with disabilities.[19] In addition, the National Programme for Prevention and Control of Cancer, Diabetes, Cardiovascular Diseases and Stroke Programme, National Mental Health Programme, National Programme for Prevention and Control of Deafness, National Programme for Health Care of the Elderly and National Blindness Control Programme have a major role in providing preventive, curative and rehabilitative services to reduce the burden of disability in their areas of operation. Early detection and management of comorbid illness and visual impairment, prevention of injury and addressing noise pollution could potentially prevent disabilities.

The strengths of the Census survey include its implementation through universal reach and use of standardized protocols in data collection. However, there are limitations due to non-response and under-reporting might result due to inability to capture the complex and sensitive information related to disability. To estimate the current burden of disability in Tamil Nadu, appropriate statistical modelling will have to be applied to the Census data of 2011.

Disability rates reflect the overall health status of the population. We have presented the estimates of disability prevalence, geographical and gender differentials in the disability rates in Tamil Nadu. To understand the reasons, additional research studies will have to be planned. Implementing effective and focused strategies for prevention will help to reduce the burden of disability in Tamil Nadu in the years to come.

We acknowledge the Office of the Registrar General and Census Commissioner, India for providing access to the data on disability and population enumeration which was used for the analysis.

Conflict of interest. None declared.