Over the past decade, India’s non-communicable disease (NCD) burden has become a focus of intense national and international research and programmatic work. It is easy to see why, in a densely populated country, NCDs are now the leading cause of death in all states, regardless of their level of economic development.[1] Furthermore, Indians face a disproportionate risk for certain conditions, developing diabetes even at a normal body mass index (BMI)[2] or manifesting heart attacks nearly a decade earlier than other ethnicities.[3] In combination with the lack of patient awareness of early-stage disease, the excess relative risk for cardiovascular disease and diabetes applied to a large, ageing population leads to a staggering absolute burden of both early-stage disease and late-stage complications.

Even as an increasing number of studies recount the heavy burden and dismal management, we lack clear evidence-based pathways to tackle NCDs.[4] Since its inception in 1993, the Disease Control Priorities (DCP3) initiative has attempted to fill this evidence gap by identifying priority areas for health intervention for policy-makers working in resource-constrained countries. In Volume 5 of its third edition, the DCP3 initiative has identified evidence-based, effective and cost-effective interventions that can be implemented at various levels within the health system, from health policy interventions to subspecialty/third-level hospital care. Many of the interventions identified in the essential package of cardiovascular, respiratory and related disorders (CVRDs) volume overlap with strategies set forth in India’s National Health Mission, especially the National Programme for Prevention and Control of Cancer, Diabetes, Cardiovascular Diseases and Stroke (NPCDCS). We highlight and recommended interventions specifically relevant to the Indian context and their overlap or differences from the National Health Mission.

The DCP initiative takes on the perspective of health policy-makers who face tight budgets and competing demands. By distilling the existing clinical evidence and assembling multidisciplinary experts including epidemiologists, clinical researchers and health economists, DCP generates recommendations to policy-makers for effective and affordable interventions, feasible to their context.[5] The first edition of DCP was a companion to the World Bank’s World Development Report in identifying priorities for health. The second edition assembled more than 600 contributors, was widely disseminated to policy-makers and translated into multiple languages. The third edition presents 9 volumes, covering a range of essential health interventions or conditions including cancer and surgery. Volume 5 is on CVRD including diabetes and kidney disease, with the rationale that these interlinked disorders share common pathways for risk factor control and many overlapping early-stage interventions. After a comprehensive review of the literature—the depth and scope of which has increased exponentially after the 2011 United Nations’ spotlight on NCD as the major health challenge for all countries—the volume’s authors and editors created a package of 36 interventions. Cost of implementation for a low-middle income country was estimated at US$ 23 per person, or an additional 1.25% of India’s gross national income devoted to health.

While India’s relatively advanced health technologies are capable of adopting the entire proposed essential package interventions, the following are more relevant to the Indian context:

Few studies quantify the amount of trans-fat in the Indian diet,[9] but indirect evidence suggests that some of it at least come from commercial oil preparations and re-use of these oils. Drawing on powerful data showing drop in cardiovascular mortality following Denmark’s trans-fat bans,[10] many countries have adopted a complete ban on trans-fats in manufactured and restaurant food products. While India’s Food Safety and Standard Authority is making progress towards this goal by restricting the allowable proportion of trans-fats in oils, we have yet to see a complete ban on transfats in manufactured food products.

Overlap and distinction from the National Health Mission

The National Health Mission of India lays out several policy priorities for addressing NCDs and designates several new centres or institutes to address specific conditions. Several of these institutes are relevant to CVRD, including the NPCDCS, National Tobacco Control Programme (NTCP) and National Programme for Palliative Care.

On a policy level, the NTCP framework emphasizes ongoing enforcement of plans for public smoking and pharmacological treatments for nicotine addiction, all recommendations in line with the WHO mPOWER and DCP3’s Essential Package. Evaluation of fiscal policies aimed at altering dietary patterns (e.g. compulsory salt reduction or bans of transfats in manufactured food products) is not emphasized in the framework to tackle CVRDs but is recommended for consideration by DCP3.

On a disease-specific level, the NPCDCS outlines a general framework for health promotion, screening and management. Further, via a new initiative called Aayushman Bharat, direct support is being provided to supplanting subcentres with health and wellness clinics, with a heavy and broad focus on primary care. [Table - 1] gives some specific recommendations drawn from DCP3 work that could help to operationalize this framework. 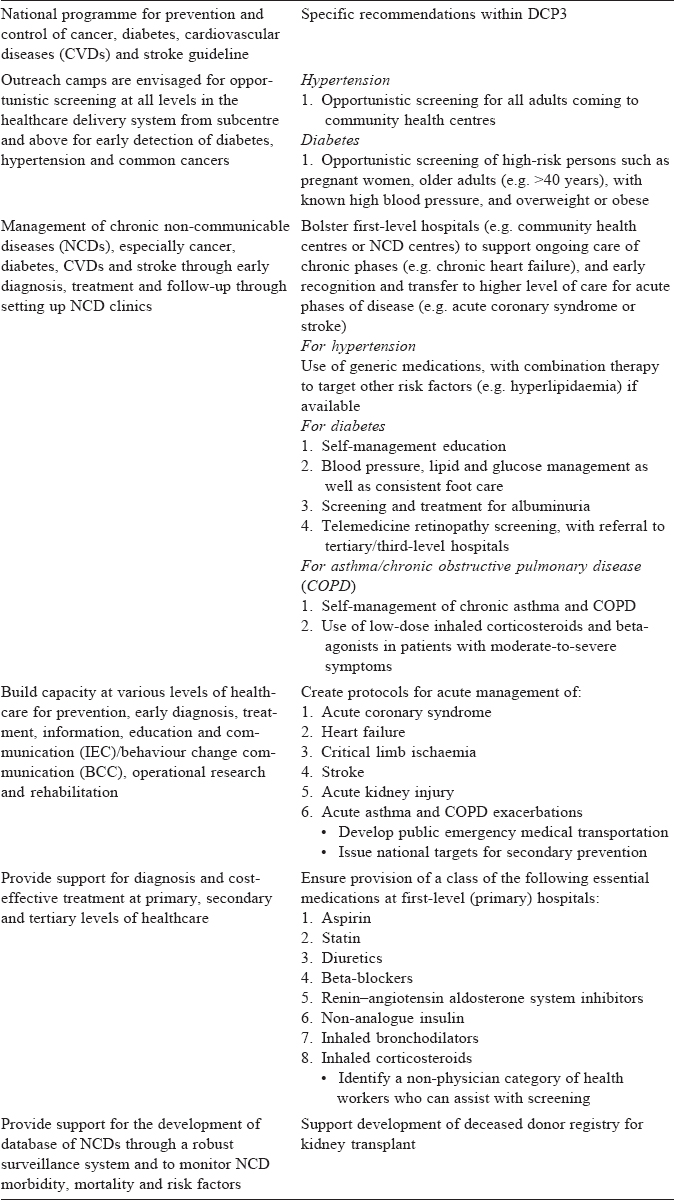 The National Health Protection Scheme and Aayushman Bharat make important strides by placing NCDs on India ' s health agenda. There are several similarities to recommendations made by DCP3—the most impactful of which is emphasis on bolstering primary care— but there are some differences. DCP3 recommends opportunistic screening for hypertension and diabetes, while the Government of India envisages universal screening, which is likely to be an expensive strategy with marginal incremental benefits. Effectiveness of screening depends on screened persons’ health-seeking behaviour and easy access to appropriate medical care, both of which are not likely to be optimal when mass screening is used. Second, the DCP3 proposes a limited set of specific interventions (e.g. use of generic medications to control blood pressure, or provision of regular foot care in diabetes) that can not only be implemented in a universal healthcare package, but are also likely to provide for financial protection of affected families and individuals. Third, DCP has recommendations on what not to invest in, for example, advanced therapies for heart failure such as implantable cardioverter defibrillators or analogue insulin, whereas the NPCDCS does not attempt to prioritize the menu of interventions available for specific interventions. Despite these differences, we believe that the broad framework laid out by NPCDCS in Aayushman Bharat can accommodate several evidence-based and cost-effective interventions advocated by DCP3, particularly when disease-specific protocols are developed and implemented.