India still has a shortage of physicians.[2] The current estimated physician-to-population ratio in India is 1:1700, against a target of 1:1000.[2]

Why the need to focus on rural medical education?

The location of medical colleges in rural districts with public ownership is among the variables strongly associated with a tendency to produce rural graduates.[6] Wang found that rural medical schools play an important role in overcoming the shortage of physicians in rural communities.[7]

Training rural health workers in a rural location is likely to enhance recruitment and retention of skilled healthcare providers in the rural areas, and possibly help in limiting the role of quacks in healthcare issues.[12]

Also, WHO had defined social accountability of medical schools as ‘the obligation to direct their education, research and service activities towards addressing the priority health concerns of the community, region and the nation that they have a mandate to serve.‘[13]

We used the Medical Council of India (MCI) database as on 27 April 2017.[19] A list of medical colleges for a state was obtained from the website of the MCI and from the Ministry of Health and Family Welfare about autonomous institutes such as the All India Institute of Medical Sciences, Jawaharlal Institute of Postgraduate Medical Education and Research.[19],[20] Population of the states and districts, and percentage of urban/rural population in districts was taken from Census 2011.[5] All the 640 districts of India were included for the study with a total population of 1210.9 million.

Classification of all the 640 districts of India based on rural population >70% and urban population >30% was done with the help of district-level factsheets of states of the National Family Health Survey· 2015–16.[21]

As per the MCI, a medical college is an academic institute that offers an MBBS course of five-and-a-half years, including 1-year compulsory rotating internship.[2]

Operational definitions of rural districts and shortage of medical colleges

Data entry was done in Excel, and percentages and ratios were calculated.

We used publicly available databases available on the websites of the MCI, Ministry of Health and Family Welfare and Census 2011 data. No ethical approval was sought. 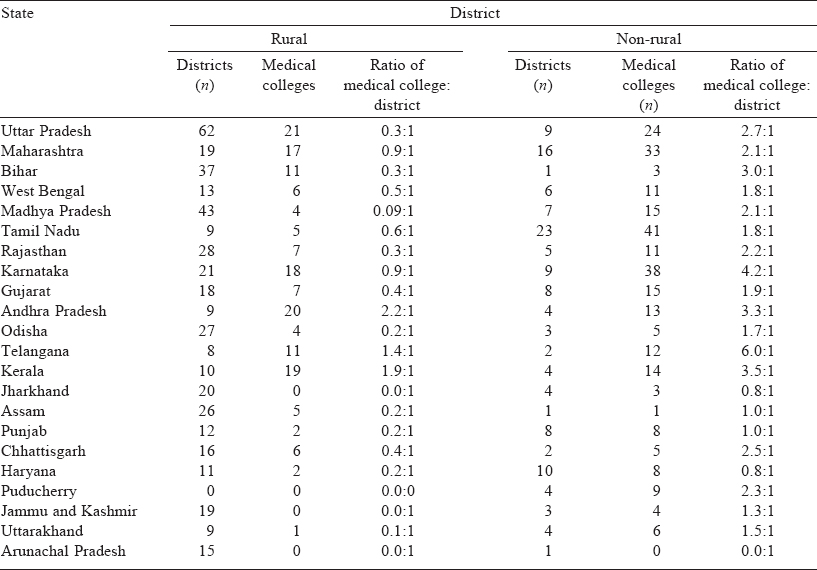 Table 1: Distribution of medical colleges as per rural and non-rural districts in states of India 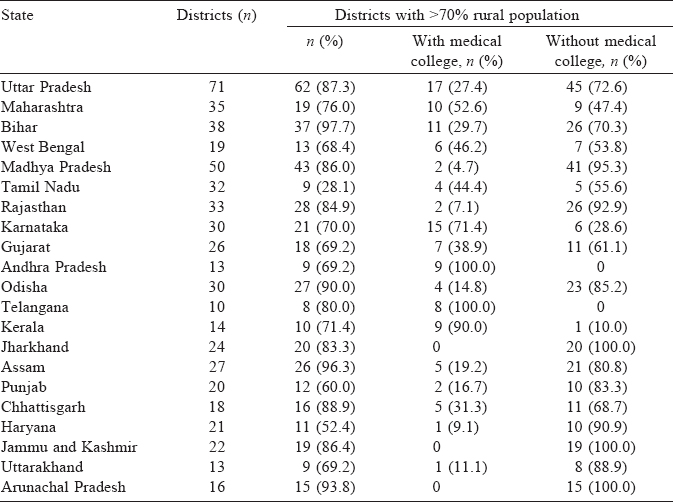 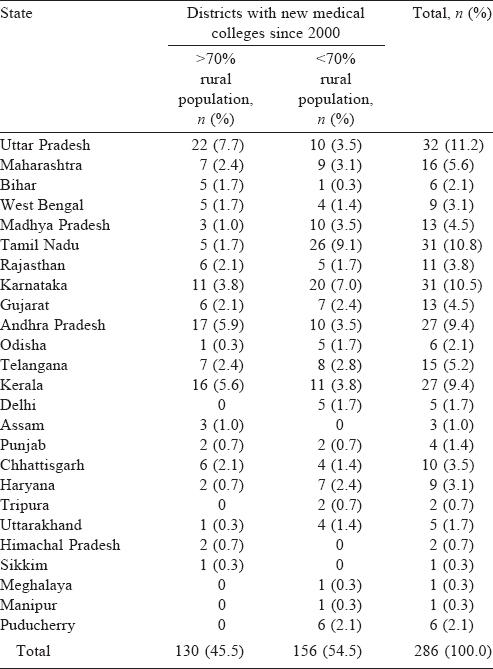 Table 3: Medical colleges established after 2000 in rural and non-rural districts in various states of India

We found an overall shortage of medical colleges in rural districts of Uttar Pradesh, Bihar, Madhya Pradesh, Rajasthan, Odisha, Jharkhand, Assam, Uttarakhand, Haryana, Punjab, Jammu and Kashmir and Arunachal Pradesh as compared to Andhra Pradesh, Telangana, Kerala, Karnataka and Maharashtra. Boulet et al. had mentioned that medical schools were not scattered uniformly at the global level, with 16 nations of Africa not having a single medical school as compared to Belize with a population of 0.27 million having 6 medical schools.[22]

One reason for fewer medical colleges in rural districts could be that people in urban districts were richer and had better paying capacity. The details of pro-rich distribution of medical colleges have been discussed by Sabde et al.[16] and Ananthakrishnan.[23] It has been documented that medical education in a rural location does increase the number of medical graduates who will work in a rural place.[12],[24],[25]

Now, as per the proposed National Medical Commission Bill, 2016, the permission for establishment of a fresh medical college will be given by the Medical Assessment and Rating Board (MARB). The proposed MARB should also look in to the shortage of medical colleges in rural districts of India.[26]

One positive move mentioned in the National Medical Commission Bill, 2016, is that the criteria for establishment of a new medical college will be relaxed for underserved areas.[27]

Many MBBS graduates from rural areas are unlikely to serve in their own rural areas after graduation.[23] There was a proposal of 50% reservation of seats for postgraduate (PG) courses in government colleges for those who have provided services for at least 3 years in public healthcare institutions in remote and difficult areas.[28] The proposal, part of the draft Indian Medical Council (Amendment) Bill, 2016, also proposes that such applicants should be required to serve for another 3 years in remote areas after acquiring the PG degree.[28] Quota can be started to get admission to MBBS course for candidates who belong to rural community and ensuring their return with bond to serve in rural and remote areas. This may help in solving the issue of shortage of doctors in rural areas.

We did not study the complex issue of shortfall of health workforce in the concerned states.

Since the year 2000, there is a trend of opening new medical colleges in rural districts. However, this trend is confined to the states which already had a number of rural medical colleges. To rectify this paradoxical situation, the MCI should follow regulations related to ‘Establishment of New Medical College’ more stringently.