Background. Management of tumour bleeding remains a challenge in oncology. With a number of methods available, radiotherapy still holds a crucial place. There are no standard guidelines for dose fractionation of haemostatic radiotherapy (HRT), and it varies from case to case. We aimed to study the effectiveness of HRT.
Methods. We retrospectively analysed the effectiveness of HRT in 70 patients in terms of control of bleeding and overall survival, who presented to us with advanced cancers from July 2014 to June 2017.
Results. The median age was 48 (range 23–76) years, and male to female ratio was 2.18:1. The most common malignancy encountered was lung and gynaecological (both 17.1%). Stage IV was the most common stage (48.6%) of the primary tumour. The site of bleeding was the primary tumour in 50 (71.4%) patients, whereas fungating regional nodes were the cause in the remaining. The median duration between initial diagnosis and HRT was 5 (range 0–19) months. Seventeen patients (24.3%) had a history of prior radiotherapy. Fifty-one patients (72.8%) required at least 1 unit of blood transfusion. Hypofractionated HRT schedules were used in all patients with the most common being 30 Gy in 10 daily fractions for 5 days a week (18, 25.7%). At the end of HRT, bleeding was effectively controlled in 53 patients (75.7%). The median survival was 13 (range 1–26) months. The 1- and 2-year survival rates were 55.7% and 4.3%, respectively.
Conclusions. HRT is safe and effective in achieving haemostasis in advanced tumours presenting with bleeding from either the primary or the regional lymph nodes. Although optimal dose fractionation has not yet established, hypofractionated radiotherapy is preferred, with the total dose depending on several factors. However, the overall prognosis remains poor.

Tumour bleeding continues to pose a challenge in oncology, occurring in up to 10% of patients with advanced cancer.[1] It can present in different ways; it usually occurs in gynaecological malignancies (vaginal bleeding), lung cancer (haemoptysis), urinary bladder cancer (haematuria), gastrointestinal cancers (haematemesis and rectal bleeding) and cancers of the oral cavity (oral bleeding). Bleeding may also occur from fungating lymph nodes in the cervical, axillary and inguinal regions; as well as breast cancer. Bleeding is sometimes substantial to warrant emergency treatment. Depending on the severity of bleeding a number of methods can be used.[1] It may be treated with local modalities such as compression bandage, dressings, styptics (adrenaline), radiotherapy, endoscopic ligation and coagulation and transcutaneous arterial embolization; as well as systemic agents such as haemocoagulants (vitamin K, ethamsylate, botropase), antifibrinolytic agents (tranexamic acid and aminocaproic acid), blood-forming agents (erythro- poietin) and blood products (whole blood, packed red cells, platelets, fresh frozen plasma, etc.). Whatever the method used, once bleeding occurs the outcome is almost always poor irrespective of the site as it usually indicates an advanced form of the disease.

Radiotherapy has been used for years to achieve haemostasis in bleeding malignancies. It is applied locally to the affected area with minimum margins, as the primary intention is to control bleeding. The most common form for this purpose is external beam radiotherapy (where the source remains away from the body). However, brachytherapy (i.e. application of the source near the tumour inside the body) is another option for gynaecological, oesophageal and bronchial malignancies presenting with bleeding.[2] In spite of the widespread use of HRT, the optimal radiation doses and fractionation schedules still remain controversial. There are no standard guidelines for HRT; it not only varies from one institution to another but also from one site to the other. HRT is mostly used as an emergency measure in patients who present with life-threatening bleeding. HRT appears to have a rapid effect but of limited duration and the outcome in such patients is almost always poor.

We did a retrospective study of patients treated with HRT from July 2014 to June 2017 on a telecobalt machine. We collected and analysed various patient-, tumour- and treatment-related factors. A total of 70 patients were included. HRT dose and number of fractions varied from patient to patient, but hypofractionated schedules, i.e. larger dose per fraction delivered over a short span of time (usually 1–2 weeks) was used in all the cases. The primary end-point of the study was control of bleeding. The secondary end-point was overall survival, defined as the time from receiving the first fraction of HRT to death from any cause or the last follow-up date. All data were reported in absolute and percentage values. Chi-square test was used for categorical data. Survival curves were calculated using the Kaplan–Meier method using XLSTAT software version 2017 for Windows (Addinsoft, New York, USA). 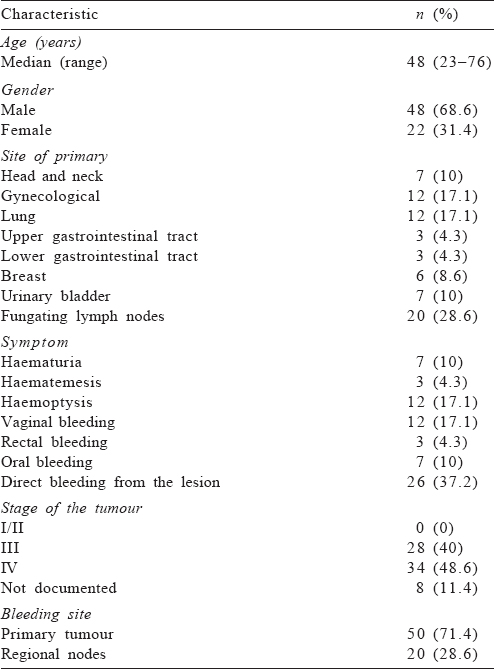 The median duration between the initial diagnosis of the tumour and application of HRT was 5 (range 0–19) months. Seventeen (24%) of the patients had a history of prior radiotherapy at the same site, with the median duration between the last dose of initial radiation and HRT of 7 (range 3–14) months. About 73% of the patients required at least 1 unit of blood transfusion. The most common HRT schedule used was 30 Gy in 10 daily fractions (25.7%), followed by 25 Gy in 4 weekly fractions (22.8%). At the end of HRT, bleeding was effectively controlled in 53 (75.7%) patients [Table - 2]. 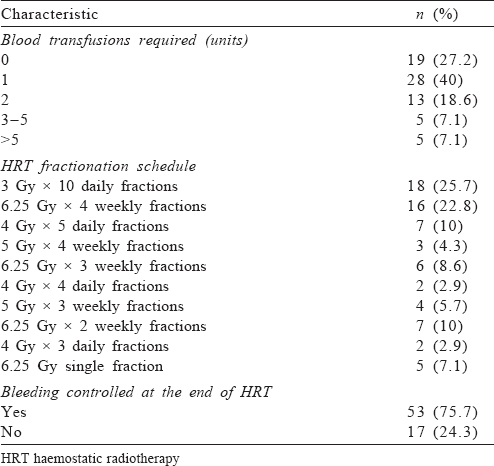 Our retrospective study in a single tertiary care institute over a short time frame highlights the efficacy of HRT in terms of control of bleeding and overall survival of cancer patients who presented with bleeding either from the primary tumour or the regional nodes. HRT has been used for a number of tumours presenting with bleeding. In spite of the widespread use of HRT for achieving haemostasis in tumours presenting with bleeding irrespective of the primary site of the tumour, there is a lack of consensus regarding the optimal dose fractionation to be used. A wide range is found in the literature varying from 8 Gy in single fraction,[3] 15 Gy in 5 fractions,[4] 20 Gy in 5 fractions,[3],[4],[5],[6] 20 Gy median dose,[7] 30 Gy in 10 fractions[5],[8] to 40 Gy in 20 fractions.[8] Thus, most authors have used hypofractionated radiotherapy schedules. We too used similar dose fractionation.

Some authors have reported the role of HRT as a case report. Jang et al. presented two cases where RT was used to prevent fatal exsanguination from bleeding skin malignancies.[6] Muneoka et al. have reported a 74-year-old male with stage IV gastric cancer who had 23 months of stable disease.[11]

HRT is a safe and effective technique to achieve haemostasis in advanced stage tumours presenting with bleeding from either the primary or the regional lymph nodes. Although the optimal dose fractionation is yet to be established, hypofractionated radiotherapy is preferred, with the total dose depending on various factors such as the general condition of the patient, severity of bleeding and history of prior radiotherapy. The prognosis in such patients remains poor.